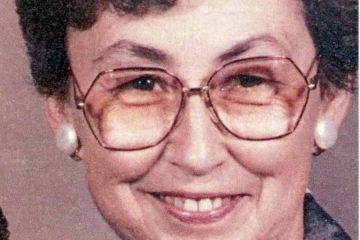 Sara Madre Rogerson Sexton, age 92, formerly of Elizabeth City, NC died Tuesday, January 5, 2021 at Veritas Assisted Living in Watkinsville, GA.  Born in Perquimans County, NC on September 30, 1928 to the late Waldo Emerson Rogerson and Sara Madre Rogerson, she was the widow of Taulbert Vann “Cocky” Sexton, Jr.  Mrs. Sexton was a member of Corinth Baptist Church, and served faithfully there as a member of the choir, and the treasury secretary.

Sara was an incredibly organized, driven, and determined woman.  She was strong and resolved so much so that her grandkids sweetly gave to her the nickname of “General Grandma”.  While she was kind-hearted and loving, she was certainly fair and firm in her interactions.  Her strength was born and drawn from the incredible life and experiences that she lived through.  Born in 1928, she was a child of the Great Depression.  She grew up living and working on her daddy’s farm, learning the hard lessons of responsibility, work ethic and resourcefulness.  She was the very image of Rosie the Riveter, being one of the many women that entered the work force during the Second Great World War.  Her work achievement was heroic for the culture of the day, ambitiously climbing to the status of Vice President of First Union Bank and being one of the first women to do so in the state of North Carolina.  She enjoyed quilting and was a master-quilter teaching the craft to the community for twenty-five years.

She is survived by her daughter, Sandra Sexton Curtis and her husband Jesse W. “Curt” Curtis, II of Watkinsville, GA; her grandchildren, John Matthew “Matt” Curtis and his wife Laurie and Charles “Charlie” Emerson Curtis and his wife Holly; and her great-grandchildren Paige Curtis, Chloe Curtis, Justin Curtis, Dominic Curtis, Annabelle Curtis, and Daisy Curtis. She was preceded in death by her grandson, Clay Dean Curtis; a sister, Pat R. Bartlett; and her brothers, Lloyd E. Rogerson and Ray W. Rogerson.

A graveside service will be held at 11:00 a.m. on Friday, January 15, 2021 at New Hollywood Cemetery, officiated by the Rev. Dr. Matt Thomas.  Memorial donations may be made to Corinth Baptist Church, 1035 US 17 South, Elizabeth City, NC  27909.  Twiford Funeral Home, 405 East Church Street, Elizabeth City, NC is serving the Sexton family. Online memorial condolences may be sent to the family at www.TwifordFH.com.