WHAT TO WATCH ON TV
Stream On: The Bible? Shakespeare? It’s all good 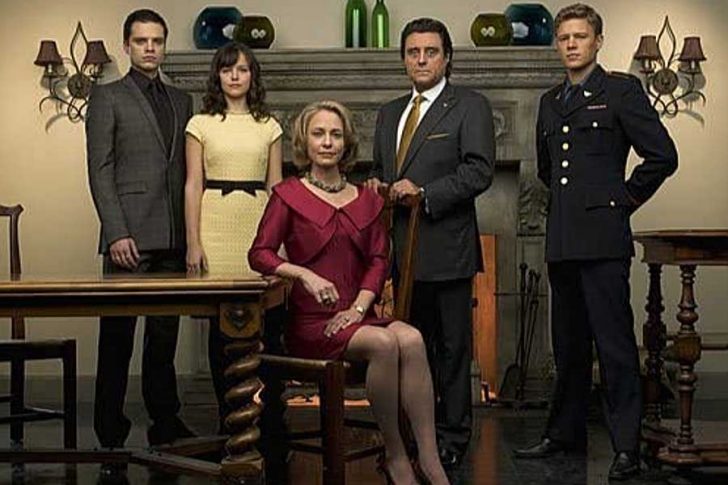 Captain David Shepherd (at right) single-handedly takes out a Goliath-class enemy tank and is feted as a hero by King Silas Benjamin (center right) in Kings. “[Silas] hath slain his thousands, and David his ten thousands.” (IMDb.com)

If you’ve ever tried to read Shakespeare, you know how painful it can be. The same goes for the most popular Bible translation, the 1611 King James. But watching actors who “get it” play Shakespeare, and reading a modern translation of the Bible, like the 1995 [New American Standard version], is much more rewarding. Better still is seeing these works performed in modern dress on—what else? TV.

This ill-fated NBC series is a take on the story of King Saul and the future king David from [1 Samuel:17 to 1 Samuel 21] in the Old Testament of the Hebrew Bible, set in modern times. Advance showings received mostly positive critical reviews. The Sunday, March 15, 2009 premiere placed fourth in network television ratings for that evening. After four episodes aired, NBC moved it to a Saturday slot, but only showed one more episode before pulling the series until summer. The remaining seven episodes were aired on Saturdays in June and July, and Kings was canceled after failing to find a sufficient audience.

That’s too bad; at least it’s still widely available—and becoming popular: it scored 100% on [Rotten Tomatoes] and very good feedback on [IMDb.com]. Ian McShane (Deadwood) chews up the scenery as King Silas Benjamin of Gilboa (Cf. The Old Testament’s King Saul of the tribe of Benjamin, from Gibeah), a ruler who believes that he was anointed by God. Complicating his life is a young soldier, Captain David Shepherd, who rescues King Silas’ son, prisoner of war Jack Benjamin (Jonathan in the Bible) from the Gath army, by destroying a Goliath-class tank, and is taken in to the royal family and court, when Silas has a vision of the favor of God now falling on David.

The stellar cast includes Christopher Egan (Dominion), Susanna Thompson (Star Trek: Deep Space Nine), Eamonn Walker (Oz), Dylan Baker (The Americans) and Wes Studi (Dances with Wolves). Episodes cost $4-5 million to make, and it shows. The setting is the 21st century; the language is modern English, but the plot is from the first Book of Samuel in the Old Testament. Kings is a lavish royal soap opera, entertaining whether you’re familiar with the Bible or not; it joins a long list of recast biblical stories such as the Coen Brothers’ [A Serious Man], Archibald MacLeish’s J.B. and Steinbeck’s East of Eden, and like most bible-inspired fiction, it remains relevant. 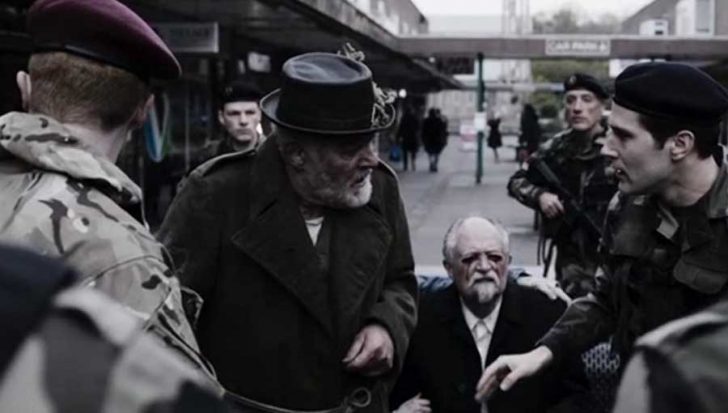 Incognito King Lear (in pork-pie hat) and the Duke of Gloucester attempt to identify themselves to French soldiers and gain admission to Lear’s daughter’s camp. “Come, come; I am a king, my masters, know you that.” (IMDb.com)

Kings, families true and ad hoc, insurrection and war are also concerns of Shakespeare’s The Tragedy of King Lear, performed first in 1605 and published in 1606 and 1623, and which itself was a reframing of the legend of Leir of Britain from around 1250. Good stories deserve to be told and retold, and so in 2018 the BBC and Amazon Studios broadcast this modern-day version.

Led by Anthony Hopkins and Emma Thompson, King Lear is set in a 21st-century militarized Britain, but maintains Shakespeare’s language, and here we have a prime example of Shakespeare’s legibility to contemporary audiences in the hands of actors who “get it.” (Closed-captions don’t hurt, though—these are mostly British actors.) It scored a 91% on Rotten Tomatoes’ [Tomatometer].

Sir Anthony Hopkins continues his incredible and wide-ranging career (he was 80 when he filmed this) with a fantastic performance as the unhappy Lear, an aging king who decides to abdicate his throne. He “calls his family together one evening in order for him to announce the division of his kingdom among his three daughters. The two elder daughters, Regan (Emily Watson, Red Dragon) and Goneril (Thompson), make lavish statements about their allegiance to and love for their father and receive each a share of the kingdom. The king’s youngest daughter Cordelia (Florence Pugh), however, finds the act of making such a verbal statement superficial and declines to make a comparable declaration. As a result, she is refused her share of the inheritance, which is now entirely divided between her two elder sisters, and she’s left to her own devices to survive” (Wikipedia). Cordelia marries the King of France and moves there.

Regan and Goneril then repay their father’s largesse by throwing him out of their homes, driving him around the bend, and he takes to the woods.

Meanwhile, the Earl of Gloucester (Jim Broadbent, the Harry Potter films and Game of Thrones) introduces his illegitimate son Edmund (John Macmillan) to the Earl of Kent (Jim Carter, Downton Abbey). Though he was raised away from home, Gloucester says, Edmund is well-loved. But Edmund plans to usurp his legitimate brother Edgar (Andrew Scott, Sherlock) by misinforming both. Edgar takes to the woods.

[TL;DR]: Nothing good happens in the woods.