January 31 Marks the 100th Anniversary of the Infamous “Ghost Ship” of the OBX, the Carroll A. Deering 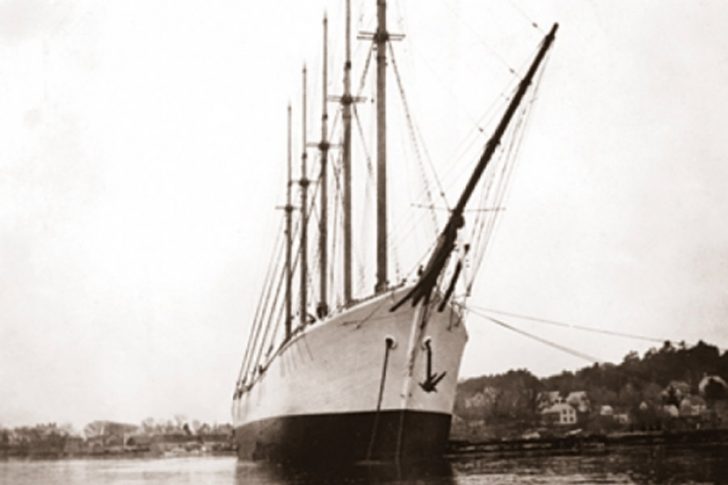 The “Ghost Ship of Diamond Shoals,” the five-masted schooner Carroll A. Deering at Bath, Maine, where she was built. (Photo: National Archives)

January 31, 2021, marks the 100th anniversary of one of the most notorious shipwrecks along the Outer Banks, and the famed “Ghost Ship” of Cape Hatteras, the Carroll A. Deering.

The wreck, which occurred just off of Cape Point, has spurred countless articles, books, and unanswered questions, as researchers continue to try to discover what happened to a captain and crew that seemingly vanished into thick, foggy air.

Legends and facts about the historic wreck have intermingled in the past century, but the heart of the story remains the same.

In late January of 1921, the Carroll A. Deering, a 1,879-ton and five-masted schooner, was returning to its Virginia homeport after delivering a cargo of coal to Rio de Janeiro, with a crew of 10 men under the command of Captain W. B. Wormell.

Per the National Park Service (NPS), a lightship keeper named Captain Jacobson aboard the Cape Lookout Lightship in North Carolina sighted the vessel on January 29, 1921. The Carrol A. Deering hailed the lightship, and an unidentified crewman reported that the ship had lost its anchors. Captain Jacobson took note of this, but was unable to report it due to his radio being disabled. He would later describe the crew of the Carroll A. Deering “milling around” suspiciously on the deck of the ship, which would later become a part of the ensuing mystery.

Two days later, on the morning of January 31, C.P. Brady of the Cape Hatteras Coast Guard Station spied the schooner aground and helpless on the Diamond Shoals, with its sails still set and its lifeboats missing. 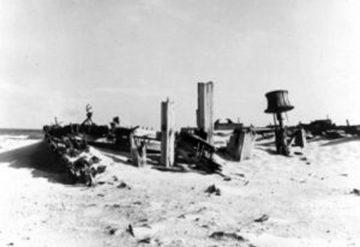 Wreckage of the Carroll A. Deering. (Image from the National Park Foundation.)

Through a series of rescues were attempted by the brave members of the Cape Hatteras Life-Saving Station over the next few days, (as well a neighboring stations), the rough and stormy surf made it impossible to safely reach the stranded vessel.

The first rescue attempt, conducted on January 31, provided a little insight into the mystery that was in store, per a 2019 article from Outer Banks historian and author, James D. Charlet

“What they could see… was confusing. It was certainly a very large vessel. Even in this dreadful environment, she seemed elegant and probably fairly new. The surfmen were able to verify a few facts: she had been driven high up on the shoals, which would have taken a massive force to accomplish; all sails were set, and the ship’s two boats were missing and the davits falls were hanging. They could see no movements onboard. All of this was eerie, scary and perplexing. The surfmen must have been thinking, ‘What in the world?’”

Rough waters kept surf boats from reaching the wreck until February 4, when these initial suspicions proved to be correct: The Carroll A. Deering was indeed abandoned.

As the story goes, the crew had vanished like ghosts, and a number of notable items were missing from the ship, including the crew members’ personal belongings, key navigational equipment, essential papers, and the ship’s anchors.

“Further details that might have a bearing on the mystery were that red light distress signals had been sent up the mast,” writes Chalet. “Inspection of the captain’s cabin revealed a spare bed having recently been slept in and three pairs of boots that were left behind. Finally, Captain Wormell’s handwritten log entries on the ship’s map was replaced with another hand after January 23.”

Prepared food was supposedly found in the galley, and as one legend goes, the surfmen also found a six-toed cat on board, (or three cats, depending on the storyteller), and took it ashore where it eventually created a generation of six-toed cats on Hatteras and Ocracoke islands.

After the wreck, multiple government agencies, (including the FBI), investigated the case trying to determine what happened to the crew members, with no concrete results. To this day, no trace of the crew or the ship’s logs has ever been uncovered.

There are a number of theories as to what happened to the crew and captain of the doomed vessel.

Per the NPS, accounts of the crew’s alleged dissatisfaction with Captain W. B. Wormell may have led to a mutiny, while the FBI’s investigation explored a number of leads ranging from Bolshevik-sympathizing pirates to rum-running gangsters, which all turned out to be dead ends. To this day, the Carroll A. Deering is one of the most discussed and written-about maritime mysteries of the 20th century, as historians and researchers still struggle to uncover what happened along that stormy January journey,

Per Joe Schwarzer, Director of the North Carolina Maritime Museum System, plans are in the work to plan a virtual commemoration of the upcoming anniversary at the Graveyard of the Atlantic Museum’s website, https://graveyardoftheatlantic.com/, so that the public can try their hand at finally solving the mystery.

In the meantime, history buffs and ghost hunters can read the entire story of the Carroll A. Deering – including the multiple rescue attempts by the surfmen of Hatteras Island – via James D Chalet’s full account of the tale at https://islandfreepress.org/hatteras-island-features/the-outer-banks-carroll-a-deering-and-the-attempted-ghost-ship-coast-guard-rescue/.

Click here to read more from the Island Free Press