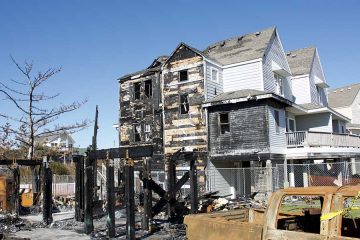 The physical damage of the fire will be erased before the human toll. (Photo credit: Kip Tabb)

There may never be an answer to what caused the fire in Buxton last October that took four lives.

“I know that this is really not what anyone wants to hear, and it’s hard for us as part of the investigation team not to be able to have definitive answers,” Steve Kovacs, Dare County Fire Marshall said in an email to the Voice. “The incident, no doubt, will have lasting effects on our community and responders for a long time to come.  Having answers helps in the healing process but unfortunately in this incident, we truly don’t have any answers.  From the public side, the investigation is basically closed, and the cause is going to be an undetermined fire.”

The charred studs reaching to the sky are all that remain of the building in the residential complex in Buxton that was consumed by fire on October 23. There is a small pickup truck, the paint burned off the body, windowless, in front of where it once stood. A chain link fence surrounds the scene and there are four crosses with the names of the victims of the fire.

The walls of the buildings that flank the fire are charred and blackened and, according to Kovacs, it’s still not clear if the structures are safe. “They are being evaluated by the insurance company to see if they are structurally sound and what could be done with them.  I haven’t heard one way or the other,” he wrote.

The human cost, though, will linger.

Coast Guardsman Harry Ramsey, who was on Guam at the time of the fire, lost his wife, Katrina and two of his daughters in the blaze. For the Coast Guard, which is the smallest branch of the service, the loss has been difficult.

“Our team here at Station Hatteras continues to grieve…The Coast Guard personnel throughout the entire region took this tragedy to heart,” Senior Chief John Matuska, Officer in Charge at Station Hatteras Inlet, said. “It’s been difficult, but each person has managed in their own way.”

“The support of the local communities, Coast Guard units, and service resources has been outstanding,” he added.

“It surprised us all as to how [generous] the response was. It reminded me of one of the major storms. The amount we raised was almost as much as we would have gotten for Hurricane Dorian,” Dennis Carroll, Director of CHUMM, said.

The funds that CHUMM has raised have been distributed based on the recommendations of the Dare County Department of Health and Human Services.

For Leigh Brinkley, Family Services Supervisor for Hatteras Island, who worked with CHUMM, the outpouring of support is something she has witnessed before when local tragedies occur.

“I am not surprised at all.  We live in an extremely generous community,” she told the Voice in an email. “We see it time and time again, when something tragic happens, whether it is a family with a medical event, a hurricane or major weather event, or a devastating fire such as the one in Buxton, our community pulls together.  It is truly one of the reasons I am most proud to live and work in Dare County.”

The financial contributions and support from the community and local government are helping to put lives back together.  Brinkley said that aside from the half dozen households directly physically affected by the blaze, other families moved out of the complex in the wake of the traumatizing tragedy.

The families displaced by the fire are in housing for the time being, although they may have to move again soon.  “Most of the families are in 3–6-month rentals and are still looking for permanent housing,” she wrote.

The Buxton complex has traditionally been used for housing Coast Guard families. In some cases, the Coast Guard is helping to find them a new post.

“One or two of the USCG families have been or are in the process of being relocated to other stations for various reasons,” Brinkley added.

Tim Quigley lost his wife Sarah in the fire. Quigley had to jump from a second story window during the blaze and spent days in an ICU in a Virginia hospital treating multiple broken bones and smoke inhalation.

A December 13 Facebook post on his personal page written for him, reported that he was home with his children and cat and, “…he is making good progress with his recovery.”

There are a number of children who are part of the healing process, and for them it may be even more difficult to recover. One of the Gofundme page managers noted that they had lost friends, playmates and people they cared about and loved, and that it was important to be careful as they healed.

Also in answering a question about how the families were doing, there was a note of hope.

“The response they have received from Hatteras, Dare County, the Outer Banks community and well beyond has made them feel very supported,” the page manager wrote.