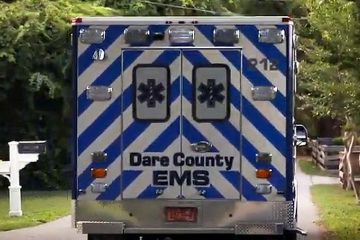 During its Jan. 19 meeting, the Dare County Board of Commissioners gave County Manager Bobby Outten the green light to begin pursuing a potential partnership with the towns of Kill Devil Hills and Kitty Hawk to include Emergency Medical Services (EMS) facilities as part of those municipalities’ future plans for new fire and police stations along U.S. 158.

The first project – an EMS substation – would piggyback off of a Town of Kitty Hawk project currently in the pipeline. That project would include the construction of a new municipal police station and fire/EMS substation on four town-owned lots along U.S. 158 near Bennett Street.

The second involves upgrading Dare County’s Emergency Medical Services Station One in Kill Devil Hills by joining forces with the Town of Kill Devil Hills to pursue the possibility of purchasing the Mako Mike’s property at Milepost 7 and jointly constructing a facility. If it came to fruition, a new facility at that site would house Dare County EMS Station One, along with Kill Devil Hills Fire and Police Departments.

“If we are going to keep pace with the demands being placed on emergency services, we don’t have a choice,” noted Commissioner Danny Couch. “We’d be crazy to look past this.”

The two projects, identified as top priorities in the county’s EMS facilities plan, would carry a total estimated price tag of $5 million for the county and would significantly bolster the county’s EMS presence and response time in those areas of Dare County, Outten told the commissioners. Both would be funded through previously budgeted monies in the Capital Improvement Fund that have been earmarked for EMS.

Of the Kitty Hawk project, Outten said the county’s contribution would be about a half million. “Around $500,000 would probably get us into that fire station, which is pretty good for us because it is pretty cheap for an EMS station,” he noted. “You can’t buy land and build a station for anything close to that.”

Kitty Hawk Town Manager Andy Stewart told the Voice that Town Council is holding a Capital Budget Workshop on Jan. 25 to discuss more details of that project as well as a potential timeline for construction.

As for the Kill Devil Hills project, Outten said the current EMS station, which sits on town-owned property, is an old metal building that is more than 30 years old and in dire need of being replaced.

So far, one problem the county faced when considering replacing Station One is to continue operations during construction. “The idea of Mako Mike’s came to mind,” Outten said, adding that the Town of Kill Devil Hills is also looking at expanding its fire station located just south of Mako Mike’s and adjacent to EMS Station One.

The county manager said that if the restaurant’s owner – Mike Kelly – agreed to sell the property and the town and the county split the cost to build a new facility with Kill Devil Hills, it would cost the county roughly $4.5 million. “I don’t know what the seller is going to do, if he is even going to sell it to us and if we can negotiate a price,” Outten cautioned.

Kelly, when reached by the Voice, said he hasn’t been in contact with the county, but would likely do so in the next week or so.

Commissioner Steve House, a former Kitty Hawk firefighter, said that an EMS substation in Kitty Hawk would “drastically cut down on response times for EMS.” Echoing House, Commissioner Rob Ross asserted, “It’s very evident to me that a Kitty Hawk station would be an absolutely tremendous benefit…to our response times, to the people in Dare County.”

As for the potential of a new and improved Station One in Kill Devil Hills, Vice Chairman Wally Overman noted that the county should pursue the possibility of purchasing the Mako Mike’s property regardless of what Kill Devil Hills decides to do.

“I don’t think we should let this piece of property get away from us,” he noted. “We may find ourselves having to do the project alone.”