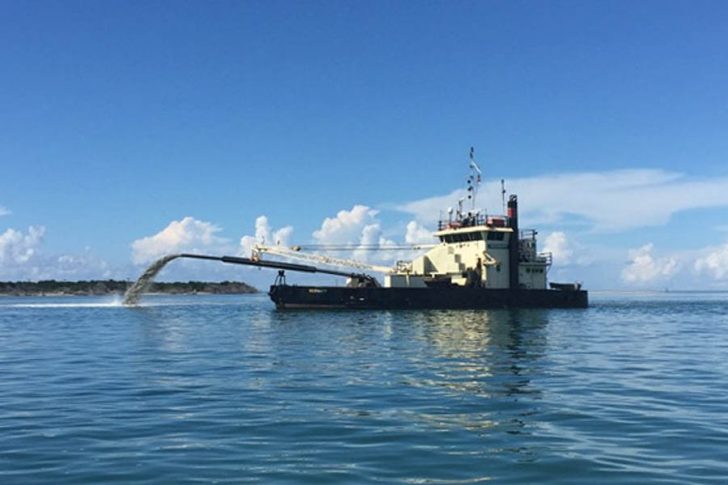 Details about a comprehensive proposal laying out numerous options for disposal of dredge material occupied much of Wednesday’s meeting of the Dare County Waterways Commission, indicating that finding somewhere to put excess sand may be as challenging as finding ways to keep it from washing away.

In a lengthy slide presentation on the proposed Dare County Dredge Material Management, Ken Willson with Wilmington-based consultant Coastal Protection Engineering told commissioners during its Jan. 20 remote meeting that the preliminary plan was the result of several months of work, with feedback from Dare County Projects Manager Brent Johnson and others.

“But this is the first time that we’ve felt like we’ve got a nice enough chunk of material that’s well organized that we could go ahead and present this to you,” he said.

For once, shoaling of the South Ferry Channel barely came up – even though persistent high winds have undone some of the recently completed dredging. According to Commission Chair Steve “Creature” Coulter, who is a charter boat captain, moving markers is all that’s needed for the time being.

“Green to green, you run aground,” he said. “Red to red, you run aground. So it needs to be jockeyed around . . . It’s narrowed up quite a bit since the dredging was done in November. There’s water in there — you just have to look around to find it.”

Most of the rest of the evening was spent on the dredge material issue, which is approaching crisis level. The proposed plan addresses a severe lack of disposal sites for material dredged from federal and non-federal channels in Dare County. Under environmental laws, the projects must have approved disposal areas to receive a permit.

Narrating as he moved through the slides, Willson provided in-depth explanations of the project’s goals: create more areas to dispose dredged sand; conduct an assessment to determine anticipated dredging needs and type of dredged material; provide short- and long-term recommendations to the county, and obtain permits for short-term projects.

“We also wanted to focus on not just the cheapest way of disposing of this material, but identifying disposal alternatives that can enhance coastal resilience,” he said. “You know, how do we get more bang for the buck? How do we treat this as an asset, not just a spoil product?

Proposed project areas, he continued, would include Wanchese inner channels off of Oregon Inlet, Stumpy Point and Rodanthe emergency ferry channels, and Rollinson Channel in Hatteras Inlet. The study, he said, found 22 “concept alternatives” — potential locations and design for disposal areas — stretching from the northern end of Roanoke Island south to Hatteras Inlet.

“We’re starting to work on sort of a decision matrix, or a scoring matrix, on how to compare all these different alternatives, and make some recommendations,” Willson said.

Options for material disposal include reconstructing old spoil islands that may have eroded away, or have been filled to capacity; building new bird islands that also serves as habitat; building out spits that can serve as buffers for land behind them; creating a new confined disposal site, where material is placed in a hole on a diked island; or replenishing eroded sound and/or ocean shorelines.

Ultimately, Willson told members, the county will have a number of potential projects to choose from that could be permitted. The report, he said, included available information on the volume of material that had been removed from channels in past dredging, as well as estimates on future amounts of material that may be dredged. The future need, he added, could be less once the planned private-partner state dredge that is under construction comes online.

Next, Willson said that final recommendations will be presented to the Waterways Commission next month, and then presented to the Dare County Board of Commissioners. Once the county gives its approval, Willson said that CPE will proceed with obtaining permits for short term projects. The first priority will be to nail down a site to dispose dredge material and obtain permits for the upcoming federal Rollinson Channel maintenance project that is scheduled to start in Oct. 2022.

“Good presentation,” Coulter commented. “That was a lot . . . It was very informative.”

Much input and data for the study was collected from stakeholders, which include the National Park Service, the Army Corps of Engineers, N.C. Department of Transportation, The Nature Conservancy, the N.C. Coastal Federation, and the N.C. Wildlife Resources Commission.

The more Willson explained the various alternatives, the more complex the planning sounded. At nearly each step of the way, cost-sharing partners, grants or other funding pots would need to be determined, numerous regulatory requirements would have to be met, and appropriate equipment would have to be committed — all within a time frame that met the maintenance needs for the channel users. That is not accounting for dramatic altering of the conditions that could result from increasing climate change impacts such as rising seas, more intense and frequent rain events and more powerful and longer-lasting tropical storms.

“I just want to commend you and the rest of the commissioners for funding this project,” he said to fellow member Danny Couch, who also represents Hatteras Island on the Dare County Board of Commissioners. “You know, to see it before us today, it’s a year further in advance than it would have been if this project had been delayed.”

At the same time that engineers at CPE were studying dredge material disposal, a separate county working group was studying priorities for a long-term waterways plan. Preliminary recommendations included securing permits for the state dredge that is under construction to dredge numerous channels in the county, request federal authorization for Hatteras Inlet and the Hatteras Inlet bar, and conduct an economic impact study of Hatteras Inlet.

Other action that was recommended was an agreement to cost share maintenance of the Rodanthe emergency ferry channel.

“These are just talking points right now,” Johnson said in an interview. “Dare County is working with NCDOT to address the waterway channels that are utilized by the ferry division.”

The Waterways Commission voted to table the report until next month’s meeting.