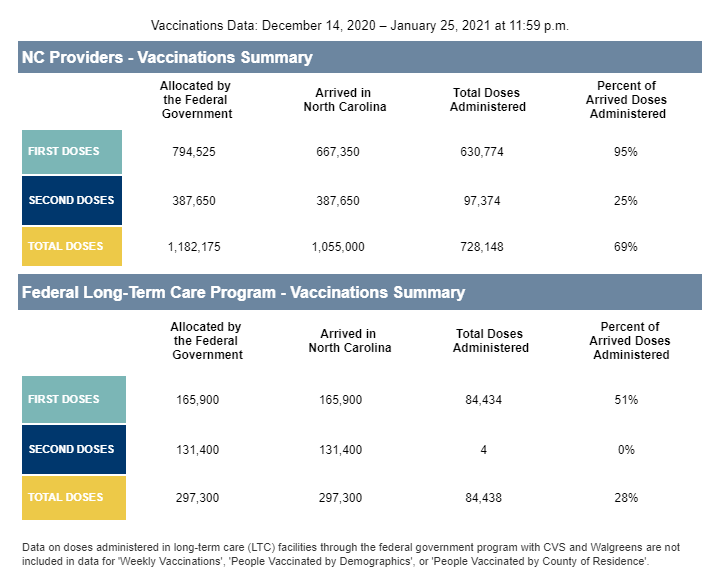 The NCDHHS website is tracking total number of vaccinations in the state.

During a Jan. 26 media briefing in which she was peppered with questions about the state’s method of distributing COVID vaccine to local health departments, NC Department of Health and Human Services Secretary Mandy Cohen announced some modifications to the allocation program.

The new practices are designed to create what a Jan. 26 letter from Cohen to vaccine providers called “a more predictable and transparent allocation model.” And they are based on the state receiving a modest 127,125 weekly doses of vaccine from the federal government, at least for the next few weeks.

Of those 127,125 doses, North Carolina will reserve 89,550 doses for use by enrolled providers that will be allocated to counties on a population basis, according to the provider letter. The remaining 37,575 doses will be used to help rebalance supplies to counties that have to date received a proportionately smaller amount of vaccine as well as counties with historically larger marginalized populations and larger populations of those aged 65 and older.

At the same time, Cohen issued warnings during the briefing, noting that “the demand for vaccines vastly exceeds supply.” She also cautioned that any plan can be susceptible to change, adding, “We’re all learning this together as we go.”

The briefing came as concerns about the equitable allocation of vaccine doses appeared to reach new heights. After the Dare County Health and Human Services Department (DHHS) had to reschedule hundreds of appointments for a Jan. 29 vaccine clinic because 700 doses were diverted to a mass vaccination clinic in Charlotte, the DHHS issued a Jan. 25 release in which director Sheila Davies asserted that “There are no words adequate to describe the frustration and dismay felt by myself and our team over having to cancel vaccination appointments…The people in Dare County and rural North Carolina deserve equitable vaccine allocation from the state.”

In an email exchange with a top state health official, Davies also noted that she had been contacted by 20 other local health directors whose vaccine allotments had also been cut this week.

In response to a reporters’ question about the state’s vaccine allotment methodology, Cohen acknowledged that the state had transitioned from an initial formula that was population based to one designed to “clear our backlog” by “shifting our posture to one of speed” that relied on “additional partners” and “mega-site” clinics.

“This week, we were particularly tight in our allocation [due to] a commitment to a large event’” in Charlotte, she said.

According to data on the NC Department of Health and Human Services website, a total of   more than 812,000 vaccine doses have been administered in North Carolina to date. That includes 95% of all first doses that have been received by the state and 25% of all second doses received. It also includes about 84,000 doses administered in the state’s long-term care facilities through a federal government program with pharmacies.

Responding to one question from a reporter who asked about out-of-state residents coming to North Carolina to be vaccinated, Cohen said that “our priority is to reach North Carolinians, [but] it is clear in our agreement with the federal government that we cannot limit [vaccinations] by border, by jurisdiction.”