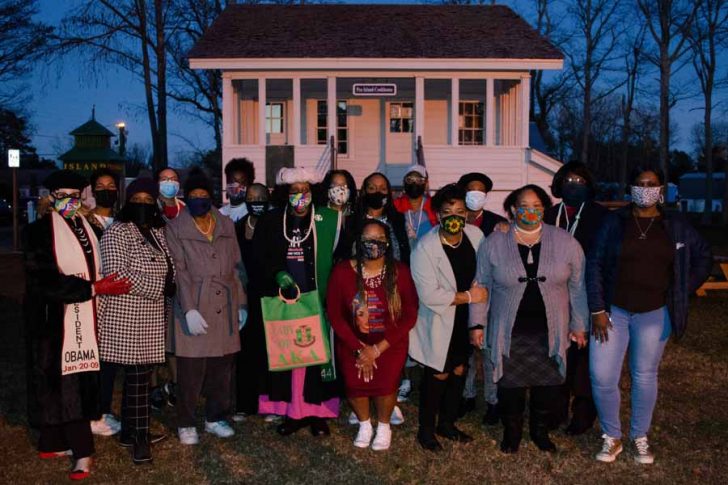 For a group of local women, the morning of Jan. 20 began with a group text from Betty Selby that went something like: “Don’t forget your Chuck Taylors and your pearls.”

The pearls and sneakers were a reference to the now famous, or infamous, Vogue magazine cover featuring new Vice-President Kamala Harris wearing both of them. The text message was sent on Inauguration Day, hours before Harris was to be sworn in as the nation’s first Black and female vice-president.

According to one of the women on the group text, Nicey Morris, momentum built among the text group during the course of the day to get together to commemorate the historic occasion.

“It was kind of last minute, ‘let’s just do this,’” said Selby, who is on the Board of Commissioners and is Mayor Pro Tem in Manteo. And shortly after work, at about 5:30, p.m., a group of 17 women gathered at the Pea Island Cookhouse Museum in Manteo. The Museum honors the legacy of the only lifesaving station in the U.S. to have been manned by an all-Black crew.

For the women, it was a social occasion (Morris’ 81-year-old mother came), but more so a moment to savor a special point in history and to honor a role model with a lesson “especially for our Black girls,” said Selby. “There is hope. This is what you aspire to.”

For the record, Selby came equipped with her black and white Converse sneakers. Morris, who seems to have quite a collection, wore her black leather Chuck Taylors.