WHAT TO WATCH ON TV
Stream On: Nothing like a puppet to give you the willies* 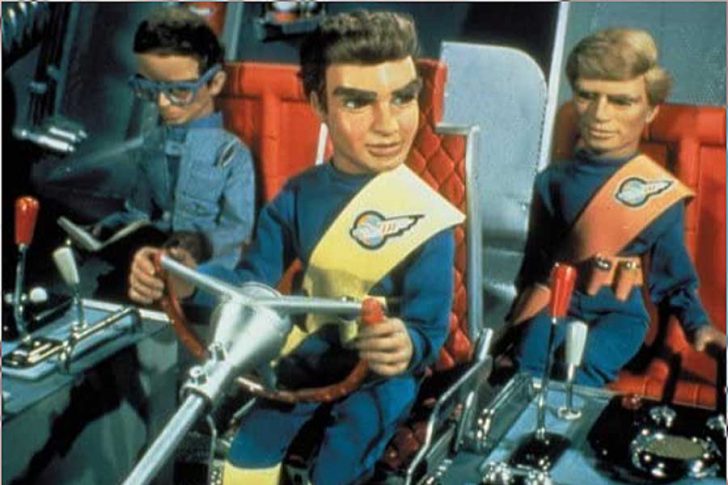 In 1961 British TV producer Gerry Anderson [YouTube channel] placed his first series with ITC Entertainment created with “Supermarionation,” a technique he’d developed using marionettes that had electronic moving eyes and lips, placed in elaborate scale model sets with sophisticated practical special effects. The effect was bizarre, the intent mysterious, but the result is hugely entertaining, especially with the self-aware scripts, full of sly jokes that drew in the parents of the ostensibly intended audience of children.

Any preconceived notions about a TV series with marionettes will be met and exceeded with Thunderbirds. The miniature sets are in one-fifth scale, beautiful and extravagantly detailed, as are the futuristic vehicles portrayed. The special effects are all practical, meaning what you see is what was filmed through the camera—there is no computer CGI or even time-lapse photography (such as is used in [claymation]). The marionettes are attractive, with moving eyes and mouths controlled by solenoids; furthermore, each had three interchangeable heads to show different emotions. They are suspended by very thin tungsten steel wires, powder-painted to match the backgrounds of each set in a time-consuming process—the wires only occasionally can be glimpsed.

Thunderbirds follows the exploits of the Tracy family, headed by American ex-astronaut Jeff Tracy. Jeff is a widower with five adult sons: Scott, John, Virgil, Gordon and Alan. The Tracys make up International Rescue (IR), a secret organization founded to save human life. They are aided in this mission by technologically advanced land, sea, air and space vehicles that are called into service when conventional rescue methods prove ineffective. The most important of these vehicles are the five “Thunderbird machines,” each assigned to one of the five Tracy brothers: a hypersonic rocket plane, a supersonic carrier aircraft, a spacecraft, a submersible and a space station.

After viewing the completed original 25-minute pilot, [ITC head Lew Grade] was so impressed by the work that he instructed Anderson to double the episode length and increased the series’ budget per episode from £25,000 to £38,000 (about £740,000 or $947,000 in 2019). It’s a fascinating watch, for reasons I’m guessing that are similar to why adults like model railroads: they are obviously models, but so much fun! (In 2015, a CGI remake, [Thunderbirds Are Go], attempted to replace the charm of the marionettes with exciting SFX, but in my opinion, pales beside the original.) 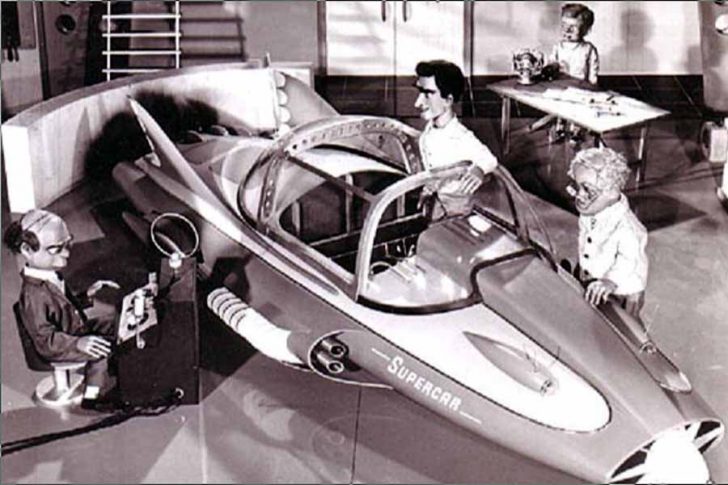 Supercar (1961) was the first “Supermarionation” series; it was vehicle-based because, as sophisticated as these marionettes were, it was difficult to show them walking. (IMDb.com)

Supercar was the first Supermarionation series from Gerry Anderson; it featured one two-passenger rescue vehicle, albeit one that could fly and travel on land and underwater, and a small cast of characters (including a mischievous monkey) that were more cartoonish than Thunderbirds’ relatively more realistic marionettes. Its episodes were half an hour long, with simpler plots (that still had twists). Interest was sustained by the comic quirks of the characters: Test pilot Mike Mercury is dull but hardy, while Supercar co-inventors Professor Popkiss and Dr. Horatio Beaker are comedy gold: Swiss Professor Popkiss wears a beatific smile and a sunny disposition, while English Dr. Beaker is absent-minded and continually searches for words as he speaks. They’re joined by wide-eyed ten-year-old Billy Gibson, rescued by the Supercar team from a downed airplane in the first episode, and his screeching monkey Mitch, who, while destroying a laboratory, is described by Dr. Beaker as “quite … intelligent.”

The Supercar team had as their perpetual foil Masterspy, an Albanian who, while not dreaming up nefarious scemes, kept tropical fish, and his nervous sidekick Emil Zarin, nicknamed “Genincik” (Turkish for weasel).

And thus, this apparently simple series approached in entertainment value, in my opinion, another contemporary “children’s” series, Rocky and Bullwinkle (1959-1964).

Supercar (and its predecessor, [Four Feather Falls], which used an early, unlabeled version of Supermarionation) launched a veritable dynasty of Supermarionation series: [Fireball XL-5] (1962); and [Stingray] (1963), which was the first British TV series shot in color; and Thunderbirds. Anderson had live-action successes, too, most notably with [Space: 1999], featuring Martin Landau and Barbara Bain. The Supermarionation series experienced a renaissance when South Park’s Matt Stone and Trey Parker released the theatrical film Team America: World Police, which used marionettes, although Stone and Parker were not fans of Anderson’s series. I am; I say give ’em a shot!

Next time, Who remembers Mark Twain?