WHAT TO WATCH ON TV
Stream On: Mark Twain wrote more than Tom Sawyer and Huck Finn 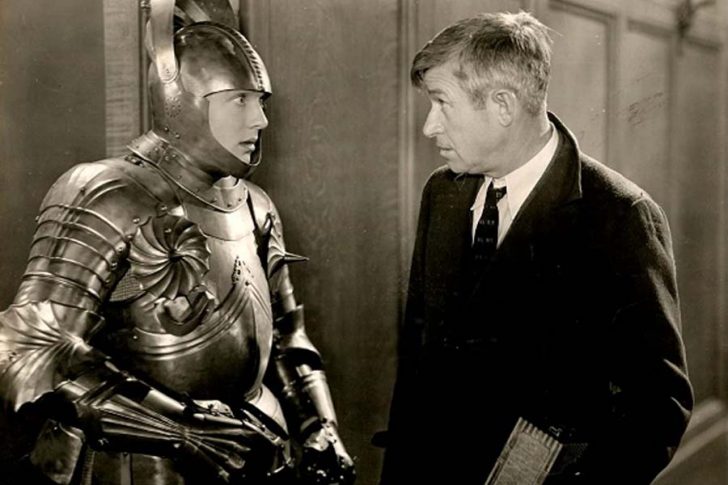 Radio repairman Hank Martin finds himself at the Court of King Arthur after a blow to the head in A Connecticut Yankee. (IMDb.com)

[Mark Twain] was a subversive writer, with often controversial messages couched in humor. Even his monumental and popular The Adventures of Huckleberry Finn [text here]/[streaming here] was marketed as a boys’ adventure novel, while Twain wrote that in the book “a sound heart is a surer guide than an ill-trained conscience” as Huckleberry reappraises his then-popular notions about slavery while traveling with an escaped slave.

But his satire of feudalism and monarchy, A Yankee in King Arthur’s Court, and his critique of social inequality, The Prince and the Pauper, were first, entertaining, and still quite popular in the previous century, even if today they reside in the Memory Hole.

A CONNECTICUT YANKEE IN KING ARTHUR’S COURT [IMDb.com][Trailer] (Buy it) 1948

“It was in Warwick Castle that I came across the curious stranger whom I am going to talk about. [When Twain dangles a preposition it seems OK.] Exactly as I would speak of my nearest personal friends or enemies, or my most familiar neighbors, he spoke of Sir Bedivere, Sir Bors de Ganis, Sir Launcelot of the Lake, Sir Galahad, and all the other great names of the Table Round—and how old, old, unspeakably old and faded and dry and musty and ancient he came to look as he went on!”

So began Mark Twain’s A Yankee in King Arthur’s Court (1889), a “time-travel” story [text here] of a modern man who finds himself in Arthurian England after a blow to the head, published six years before H.G. Wells’ landmark The Time Machine. Twain had had a dream of being a knight in armor himself, struggling under the weight of his metal suit, and took the concept to his novel.

The 1931 movie is in a casual black and white and features Myrna Loy and Twain acolyte Will Rogers at his aw-shucks best in the title role, while the 1948 version is in Technicolor and stars Bing Crosby, Rhonda Fleming and William Bendix—but is a musical. Both eschew the text’s many passages quoted directly from Sir Thomas Malory’s Le Morte d’Arthur, the late medieval collection of Arthurian legends, concentrating on the adventures of Connecticut Yankee Hank Morgan (Martin in the 1931 version). Both films have their charms, but in 1952 [Studio One] broadcast a 50-minute teleplay from the book [see it here] featuring Thomas Mitchell and Boris Karloff, that uses more of Twain’s excellent prose than either of the Hollywood efforts—it’s my favorite version. 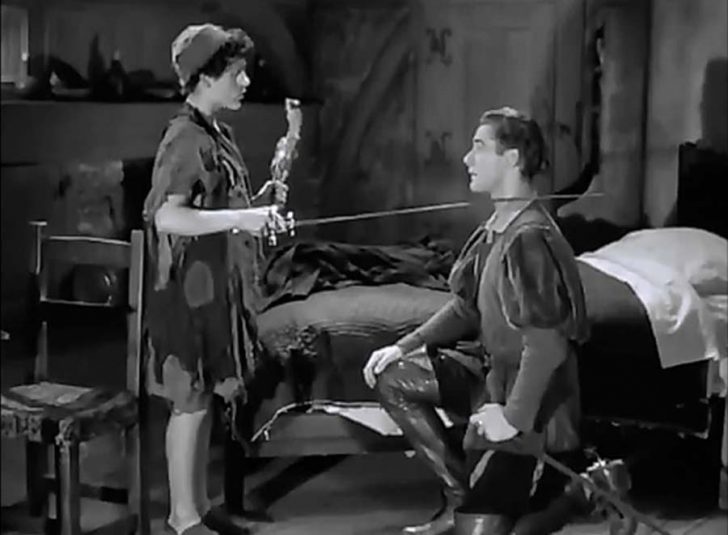 Young Prince Edward, in disguise, gives Miles Herndon permission to sit in his presence, in The Prince and the Pauper. (IMDb.com)

THE PRINCE AND THE PAUPER [AFI.com][Trailer]

“This is not a history, but a tale of once upon a time. It may have happened. It may not have happened. But it could have happened.” This high-dollar retelling of Twain’s popular story about a young prince and a beggar boy exchanging roles was timed to release during the coronation of Britain’s Edward VIII in 1936, but was pushed back when Edward abdicated his throne in order to marry American divorcée Wallis Simpson [see The Crown]; it was finally released four days before the coronation of Edward’s brother and his wife, King George VI and Queen Elizabeth.

Starring Errol Flynn as Miles Hendon, young Prince Edward’s friend and protector, and Claude Rains as the unscrupulous Earl of Hertford, with his own designs on the throne, The Prince and the Pauper featured a lavish score by Erich Wolfgang Korngold, the Austrian prodigy who wrote music for 16 Hollywood films including Flynn films Captain Blood and The Adventures of Robin Hood.

Young Prince Edward and Tom Canty, the beggar who tastes and challenges the prince’s royal assumptions and privilege, are portrayed well, with an easy naturalness, by twins Bobby and Billy Mauch respectively, who later found careers behind the cameras. The look Tom Canty gives when asked if he’s ready to perform his ablutions by the prince’s staff is priceless.

The direction, by William Keighly (The Bride Came C.O.D., The Man Who Came to Dinner, etc.) is expert, the art direction is beautiful, the drama and comedy are mixed well, and Errol Flynn (who appears in a minor role despite top billing) is as charming as ever.

Next time, an occasional series on TV stalwarts: Three Cheers for Ted Danson!