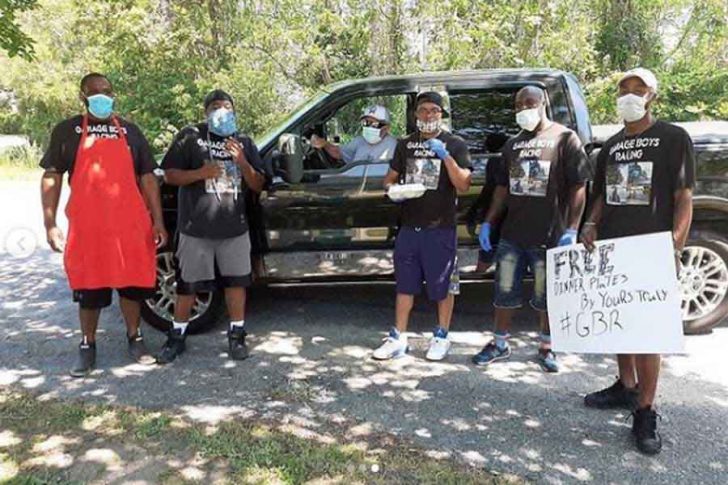 GBR members work to help the needy in their community. (Photo credit: @garageboysracing_gbr/Instagram) 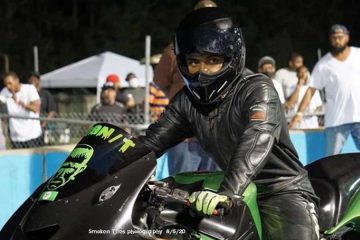 Garage Boys Racing (GBR), a motorcycle racing team started by Manteo locals, has dreams of one day making a name for themselves in the racing scene. But the group’s 20-or-so members are also focused on making a broader impact in their community.

“We’re not just some crazy kids out here trying to go fast on motorcycles,” 27-year-old Trey Govan said. “The community is just as important as the racetrack.”

Since forming in September 2019, Garage Boys Racing has looked to use its growing stature in the community to lend a helping hand wherever needed — from moving furniture to providing for families impacted by a hurricane. The group is made up of men ages 15 to 31, and most of the members are from Manteo or the surrounding area.

“Any time somebody in the community needs a hand, or we see somebody that’s maybe less fortunate in these times or just needs some help with anything, we try to reach out,” group president Isaiah Govan, the 24-year-old brother of Trey, said.

After Hurricane Dorian swept through Ocracoke Island in 2019, Garage Boys Racing helped a family replace furniture they lost, donated a check to two families for a roof replacement, and provided new bicycles to kids who lost theirs in the storm, according to vice-president Timmy Charity.

They’ve also passed out meals to families in need around the holidays, gotten involved with tutoring programs, and this past Christmas, they held a toy drive that provided toys to about 100 kids in Manteo, Charity said. “If there’s something we can’t help out with or don’t have the funds for, we’re definitely going to find a way or point you in the right direction,” he added.

Isaiah Govan wanted to start the racing team to honor his dad, the late Edgar Govan, who raced motorcycles and got his sons into racing at a young age. The elder Govan, who was widely known as ‘Poor Boy’ and who died in 2014, was well known and respected in Manteo for his community service as a youth sports coach, advisor for local tutoring programs, and member of the Roanoke Island Volunteer Fire Department.

(Edgar Govan’s death came after he had been charged with killing a neighbor in a July 2013 confrontation, with supporters and attorney saying he had a viable case for self-defense. At a hearing to reduce his bond, his attorney submitted 35 letters of support written by members of the community. At his funeral at the Free Grace Church of Christ in Manteo, the church was filled to capacity while hundreds more—ranging from office holders to firefighters—gathered at the site to honor Govan.)

His sons are trying to continue that legacy by creating a “big brother system” in which GBR’s older members mentor the team’s younger members.

“We see how the kids around here just kind of gravitate towards us and look up to us, so we decided to use that and pour it into the community as much as we can,” Isaiah Govan said.

Among the mentors is Charity, a 2007 Manteo High graduate, who believes his background growing up in Manteo and now teaching and coaching sports at Manteo High puts him in touch with what kids today are going through.

“I just like being a positive influence, just having that ability to reach out to kids,” Charity said. “I’m a father figure for a lot of kids… so I just try to do as much as I can, help out whenever I can,” he added.

Aj Spencer, a 17-year-old senior at Manteo High who races with Garage Boys Racing, says he looks up to all the older guys on the team.

“They’re all good people, they never point you in the wrong direction,” Spencer said.

Spencer is one of about five riders in GBR, which competes in about 15 to 20 races during the racing season from March until it’s too cold to race around December or January. The group mostly races motorcycles and dirt bikes for now, and Isaiah Govan is hoping to get his dad’s old race truck back up and running soon.

“We’re just trying to compete with the best, get on some of the big scenes, get some sponsors and stuff like that,” Isaiah Govan said about the group’s future goals.

The group is based out of the full-service garage that Edgar Govan owned and operated behind his home on Fernando Street. After his dad died, Isaiah Govan purchased the property to work out of the garage.

“That’s like a haven for him, man,” Trey Govan said about his brother’s emotional connection to the garage.

The garage today serves as a meet-up spot for the team, and a place where younger members can go to hang out after school. Those members are expected to keep their grades up to participate with the group.

“We’ve had to be stern with kids and tell them, ‘you gotta step away and get your math grade up,’” Charity said. “We actually try to tutor, as much as we can, and do what we can to help out when they get low.”

The motorcycle group provides a positive outlet for kids, some of whom wouldn’t otherwise have “much to do” around Manteo, Charity said.

“Being stern and staying on top of them is definitely keeping them out of trouble and keeping them off the streets, really,” he added. “There’s not much to do here in Manteo. The route a lot of people take once they get out of high school is they just stay around town and not do much.”

For his part, Trey Govan said he has friends who are still serving jail time for things they did as teenagers.

“It’s saving lives, man, honestly,” he said. “It’s giving them an outlet and just another thing to do that’s keeping them from the bulls—.”