Residents learn Dare County can foot more of the bill 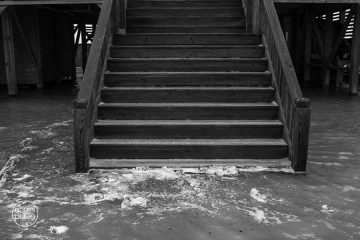 This flooding in Avon is one reason the county wants to move ahead with beach nourishment. (Photo credit: Daniel Pullen Photography)

At a Feb. 24 public hearing, Dare County Manager Bobby Outten told Avon residents their share of the funding burden for a potential 2022 beach nourishment project that would put about a million cubic yards of sand along a 2.5 mile stretch of beaches would be less than originally anticipated.

The overall project carries a total price tag of roughly $11 million, an annual $750,000 of which would be funded through a municipal service district tax on property owners in the community over a five-year period.

Outten explained, however, that due to an unexpected increase in 2020 occupancy tax revenue, the county has the ability to fund more of the project – roughly 70 percent. That means that instead of an annual 40 cent per $100 tax on oceanside property owners and 10 cents for westside property owners that the county had originally projected over the five-year period, those numbers would decrease to 25 cents and 5 cents, respectively.

The county manager said that the Dare Commissioners will look at the public’s input and make a decision on how to proceed next month, most likely at their March 15 meeting. If they decide to proceed with the project, they will set a tax rate, send a letter to affected homeowners and hold a second public hearing.

If everything goes as planned with permitting and bids, Outten explained, the project would begin in the spring of 2022 and be completed within about 90 days. Sand pumping would coincide with beach nourishment maintenance efforts in Buxton to keep costs down.

The Feb. 24 public hearing on the issue attracting a significant amount of attention.  The county received nearly 300 emails with questions and comments regarding the proposed project, and there were dozens of speakers who spoke remotely.

For his part, Outten explained the need for the project by stating that that beach erosion in Avon has worsened significantly over the past few years.

Noting that five years ago, there was a wide beach and two rows of dunes in front of oceanfront homes, Outten added that, “You can see now that the water level is right along [those houses], and at the rate of erosion that we’ve got, it’s not a long way before we’re to the next row of houses. So, it’s significant. And that significance isn’t just when we have a hurricane, that significance has become whenever we have a nor’easter and really whenever we have a blow of any substance.”

Addressing the chronic flooding on Highway 12, Outten said that, “When we have that flooding, the flooding impedes our first responders. We can’t get ambulances through to keep people safe. We can’t get fire trucks through. We’ve had problems even getting the sanitation crew to pick up trash.”

He added that given the current situation, “There will come a day…where these costs will go up astronomically, so we’ve got to get out ahead of this…we’ve got to act now.”

Dare County, in an effort to study solutions to the erosion, hired Coastal Science and Engineering to complete a feasibility study, which recommended the project to create a beach that would be about 120 to 125 feet wide. At the end of five years, a maintenance project would be needed to maintain that width.

Input from the public at the Feb. 24 hearing primarily consisted of questions regarding the project and the tax burden on property owners. And several at those in attendance offered their opinions on the project.

Richmond resident Pat Hughes, who owns two oceanfront pieces of property on Oceanview Drive, said that he has increasingly had to push sand in front of his house over the last few years.  “I don’t want my taxes raised, but I understand why we need to do it,” he acknowledged during the hearing.

Joan Fitzgerald offered kudos to the county. “My husband and I are really extremely happy that Dare County has been so active on this and is moving forward on such an important project, so we are completely supportive of it.”

For his part, Stephen Day said it shouldn’t be the residents’ responsibility to foot the bill.

“I find it almost unbelievable, frankly, that you would propose raising property taxes on private property owners in Avon to pump sand onto the beach that’s owned by the U.S. federal government and help protect a section of Highway 12 that’s owned by the State of North Carolina,” said Stephen Day. “Any objective person understands that it’s the federal and state government authorities’ responsibility to step up, protect, preserve and fund the Cape Hatteras National Seashore and NC Highway 12.”

Outten responded that the county has been working toward securing beach nourishment funding at the state and federal level, but said that so far, that effort has not been fruitful. “This isn’t something that we’ve given up on, nor will we give up on because it’s not the last time we’re going to have to do a project,” he noted.

But he stressed that the current needs require immediate action with the limited resources available.

“At least our board doesn’t think it’s correct for them to sit on their hands, watch everything get destroyed, watch the road wash away, create all the problems that are associated with it and do nothing in hopes that this administration or another one might pay for it,” he asserted. “So, I think our board has decided it’s time for them to act.”