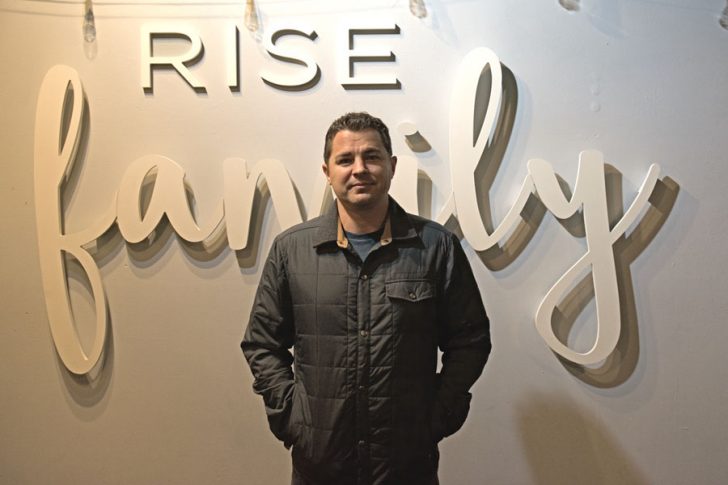 The past year was a difficult one for Jamie Smith, Youth Ministries Pastor at Liberty Christian Fellowship Church in Colington, and his RISE student ministry.

“Our youth group is really large,” he said. “We have, around eighty to a hundred kids, and meeting in a large group right now is very challenging.”

The program, which has grown to what may be the largest youth ministry on the Outer Banks, has a large room at the church. It’s almost like a small theater, with a stage filled with drums, musical instruments and a microphone. The room has been not been used this year.

For Smith, though, the size of the program is not as important as the individual needs of some of his kids. “These kids need to be connected. This pandemic brought a lot of isolation, which has not been good mentally for the kids. They need to be a part of something positive but also connected into this family that we call RISE,” he said.

The needs of the kids in his ministry are something he knows personally. He knows it because he lived it. “My parents were heroin users. Drug addiction totally destroyed my family,” he said. His aunt and uncle stepped in and adopted him, but the pain was still there.

“It was a real traumatic upbringing, when you get split up from your parents, growing up, seven, eight years old, watching them go through a heavy drug addiction,” he said, adding, “It was a real rough upbringing, but I know that God used that.”

His aunt and uncle moved to the Outer Banks when Smith was eight, and it was here that he grew up. He was pretty wild.

“We used to go to parties and trash houses. Get drunk every weekend,” Smith recalled. He was hanging out with soon to be professional surfers Jesse Hines and Noah Snyder, and that, according to Smith, gave him license to behave in whatever manner he wanted to.

At college it was more of the same, and Smith flunked out of UNCW after a year. Coming back to the Outer Banks, at first nothing changed. But then one day, the surfing buddies were going to Avon to catch some waves, and a friend invited them to the Ark Church in Nags Head before they left. There was a guest speaker that day, and the friends sat in the back of the church, not really wanting to be there, Smith recalled. But as the speech went on, something happened.

“That guest speaker was talking about how there’s a way out. There’s a man named Jesus, who is God, and He wants to be your father. And I remember… I felt like this man was speaking directly to me,” he said. “I literally felt like there was electricity going through my body, and the biggest thing I felt was the love of God.”

It was the beginning of a transformation for Smith. He went back to community college, then reenrolled at UNCW, earning a degree in business management. It wasn’t easy; the choices he had made earlier created difficulties in college. “I studied extra hard. I had to learn stuff that I cheated on in high school,” he said.

He also met his wife Kimber. “She lived in the same apartment complex, and she was super godly,” is his description of her.

As the work on his undergraduate degree came to an end, he began working in youth ministry.

“When I got married, they offered my wife and I this youth intern job at a Presbyterian Church in Wilmington. It was at church that the kids just gravitated towards me,” he said.

As he worked in the church, he felt that God was calling him to be a pastor, and he and Kimber moved to San Diego for seven years as he studied for his Masters of Divinity degree. San Diego gave him a chance to use the skills he was developing. He became the youth pastor of a local church and, “I actually was a surf coach at one of the high schools. San Diego High School,” he said.

In 2008 a friend told him Liberty was looking for a youth minister, but he was unsure if moving back to the Outer Banks was right for him.

“I was reluctant [to] live back here in my hometown…with people that grew up with me, and knew the other side of me,” he said. It was the interview with John Hobbs, who was the pastor of the church at that time, that convinced him to come home.

“John Hobbs was really the mentor I was always looking for. He was like a missing piece for me of a father in ministry,” he said.

What he found when he came back was a program that was struggling to find its way. “When I first came to Liberty, there were eight kids,” he said.

The program began to grow helped by a very real commitment from the church. The Liberty Youth Ministry has the ministry room in the church complex, two buses, and in the past has sponsored pizza night and burger nights. Even in this year of COVID, the youth group has managed to meet once a month outdoors around a campfire on church grounds.

Smith notes that the commitment of the church has been instrumental, but it seems his philosophy of reaching out to the kids has also played a role.

“One of the things that we really try to teach these kids is that church is not just a building. But it’s a family.” he said.