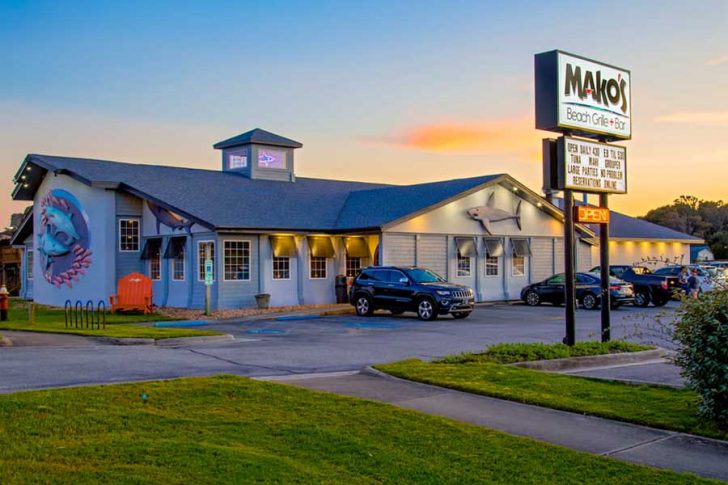 The sale, approved at the March 1 Dare County Commissioners meeting, had a price tag of $1.95 million, according to Dare County Manager Bobby Outten.

For his part, Kelly said that, “We’re glad to be able to contribute” to significant improvements for Kill Devil Hills.  He also explained that the 35-year-old restaurant would have soon required significant refurbishing. Kelly bought the business with the late Frank Gajar in 1994.

Under the terms of the agreement reached on March 1, the closing date for the sale of the restaurant at Milepost 7 would be October 2021 and Kelly says he plans to keep the restaurant open until then. “We’re still going to be in the catering business,” he adds.

Mako Mike’s is the third restaurant that Kelly has sold in recent years. In 2017, he sold his signature Outer Banks Restaurant & Tavern in Nags Head to German grocer Lidl for $3.9 million, although the company never used the site. And in 2019, the Dare County Tourism Board purchased Pamlico Jack’s, also in Nags Head, for $3.1 million.

“We need an EMS station,” Outten told the Voice, explaining the impetus for the sale and pointing to the deteriorating condition of the current EMS building. “Similarly, Kill Devil Hills needs to expand their fire department and move their police station…We’ll now work together with Kill Devil Hills…If everything works out, we’ll have police fire and an EMS station on those properties.”

Back at its Jan. 19 meeting, the Dare County Board of Commissioners, gave Outten to go-ahead to pursue partnership plans with the towns of Kill Devil Hills and Kitty Hawk to include Emergency Medical Services (EMS) facilities as part of those municipalities’ future plans for new fire and police stations along U.S. 158.

At that meeting, Outten raised the specter of buying Mako Mike’s from Kelly as part of the project, but acknowledged that, “I don’t know what the seller is going to do, if he is even going to sell it to us and if we can negotiate a price.”

At that point, Board Vice Chair Wally Overman Vice Chairman Wally Overman said the county should pursue the possibility of purchasing the Mako Mike’s property regardless. “I don’t think we should let this piece of property get away from us” he noted.