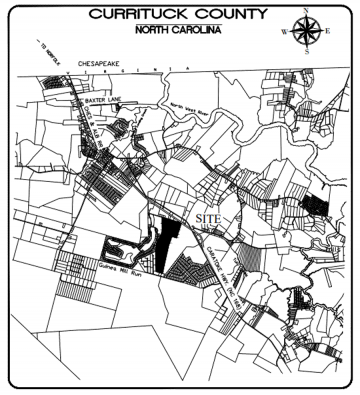 A new development that would bring 277 new housing units to Moyock moved one step closer to final approval Monday March 1 as the Currituck County Board of Commissioners voted 5-2 to approve a conditional rezoning application for the Flora Farms project.

The project presented Monday, which would be built on a 202-acre parcel just south of Moyock Middle School, is a significantly scaled-down version of the massive development that applicant North-South Development Group LLC proposed last year. The Board of Commission narrowly voted 4-3 in September to reject the larger development that included 410 total dwelling units —including 285 single-family units and 125 upper-story dwelling units — and 100,000 square feet of commercial space. Commissioners at that time raised concerns about a series of issues, including traffic.

All of the redesigned project’s 277 housing units would be detached, single-family units, and the commercial space has been reduced dramatically to 7,500 square feet. Traffic studies provided by the applicant estimate that the changes will reduce the amount of traffic generated by 56 percent compared with the earlier proposal. 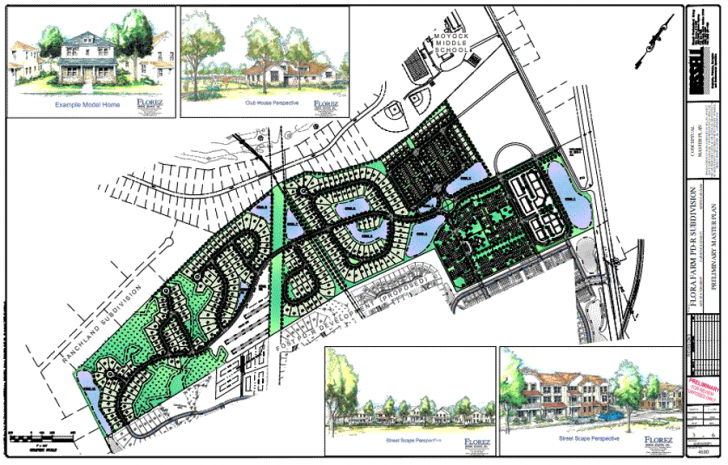 The March 1 rezoning approval is one of several the project will require before work begins. “There’s still a few more steps before they can start building houses, but this is the first of those,” County Planning and Community Development Director Laurie LoCicero said.

Although the Planning Board voted unanimously last month to approve the revised project, the county’s planning staff recommended against approving it, primarily due to concerns about inadequate school capacity to support the development. Moyock Elementary School is currently over capacity, while Moyock Middle School and Shawboro Elementary School are projected to sit just under 100% capacity for the 2021-22 school year.

“There is not adequate school capacity currently to support this development,” LoCicero told the commissioners Monday. Attempting to address those concerns, County Manager Ben Stikeleather told the board at the meeting that he expects the planned expansion of Moyock Elementary School to be completed by the start of the 2023-24 school year. The expansion will increase the school’s capacity to 750 students.

This timeline matches up with the expected construction of the Flora Farms development, which will be done in five phases, with the first phase not being recorded until June 1, 2022. The first phase will not include more than 55 units, an amount that is estimated to increase school enrollment by 14, according to Jamie Schwedler, an attorney representing the applicant. Those students likely wouldn’t be enrolled until the 2023- 24 school year given the construction timeline, Schwedler told the commissioners. The project would add an estimated 44 students in total, she said.

Commissioner Mary “Kitty” Etheridge, who voted against approving the revised project along with Commissioner Selena Jarvis, said she ran on a promise of “controlling growth and doing the will of the people.”

“The people of Moyock have worked real hard and given a great deal of input into the Moyock Small Area Plan, and this development is not consistent with their decisions,” she said. The Moyock Small Area Plan was adopted in 2014 in response to citizen concerns over the potential for exponential growth in that area of the county.

Conversely, Commissioner Kevin McCord said the Flora Farms application is consistent with a county land-use policy to “especially encourage two forms of residential development, each with the objective of avoiding traditional suburban sprawl.”

“The request is reasonable and in the public interest because the increase in the number of residential rooftops may bring additional commercial development to the Moyock area,” he added.