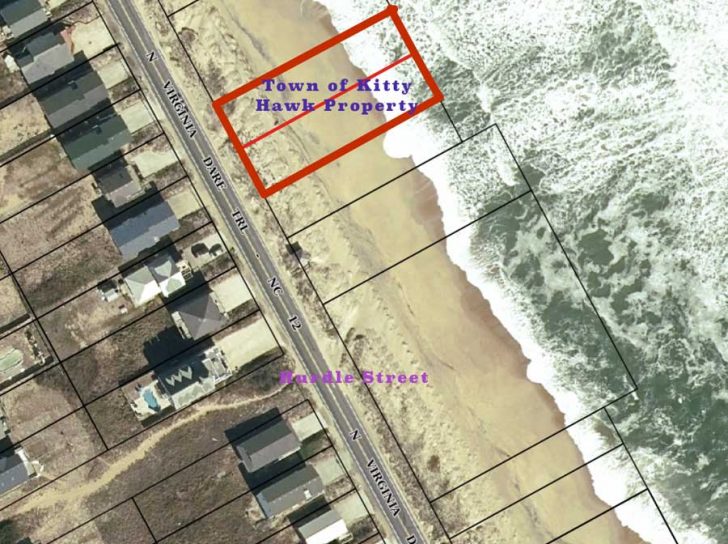 During its March 1 meeting, the Kitty Hawk Town Council voted 4 to1 to approve a survey of Hurdle Street, an undeveloped “paper” street that the town is eyeing as a potential site for beach access parking, which some officials say is woefully needed in the municipality.

The move is the first step in potentially developing a beach access on the Hurdle Street property, which is a dedicated town street that appears on municipal maps but was never built. Now just a sandy trail, it is located just south of Stack’ em High on the east side of U.S. 158.

But turning that site into a beach access has become a controversial topic in Kitty Hawk and is opposed by some residents who have been emailing council members with concerns that range from potential flooding and dune disturbance to increased traffic and an overcrowded beach.

Scott and Eileen Sisolak, who own property on nearby Hallett Street, are among those who have voiced concerns over the prospect of a beach access at that location. In a Dec. 30 email to Perry, they asked that the town not move forward with the project.

“We understand that you have a tough job trying to meet the needs of all the residents of Kitty Hawk,” they wrote. “However, this proposal is not going to solve the problem of beach access because the beach at the end of Hurdle Street is just not wide enough and way too prone to flooding.”

At the March 1 Town Council meeting, Councilwoman Lynne McClean, who voted for the survey, shared an anecdote about a mother who lives year-round in Kitty Hawk Village and can’t find parking to take her family to the beach.

“I think that mom deserves to take her kids to the beach as well as our visitors deserve to be able to go to the beach and have access to the beach that’s safe for them,” McClean asserted. “I think we need to start looking at finding every spare parking place in Kitty Hawk that we can on the east side of [U.S.] 158.”  She also floated the idea of directing staff to identify potential parking spaces in other locations that could be used as soon as this summer season.

Mayor Pro Tem Craig Garriss cast the dissenting vote, saying he believed the town’s money would be better spent surveying all paper streets as well as assessing parking areas in the town. “This has been a heated issue for some time…Do we have a parking problem in Kitty Hawk for beachgoers? Yes sir, we do. We definitely do,” Garriss said. But he added that there were more pressing issues in the town that demanded attention.

During the March 1 meeting, Perry attempted to address a number of concerns about the Hurdle Street beach access. In response to the issue of flooding, Perry pointed out that the 2022 beach nourishment project would widen the beaches, and that past nourishment efforts have helped to alleviate a significant amount of flooding. He also noted that any parking area would be made of pervious material.

One issue that Perry said needed to be resolved was that of property lines, adding that there were indications that some nearby property owners “may be staking public property as their own.”

“This requires town action to establish who owns what with survey and clear markings,” he added. “Citizens of Kitty Hawk, this is your land, these people are using it as if they own it. They do not.”

Noting that Hurdle Street is in the “spotlight” now, Councilman Jeff Pruitt said that when he went to walk the property, he was met with “no trespassing” signs and didn’t know if he was in the right place.

He noted the move was in an effort to establish and clearly mark what is town-owned property. To that end, the motion the council passed on March 1 also included a provision to remove any current signage on public property that indicates it is privately owned.