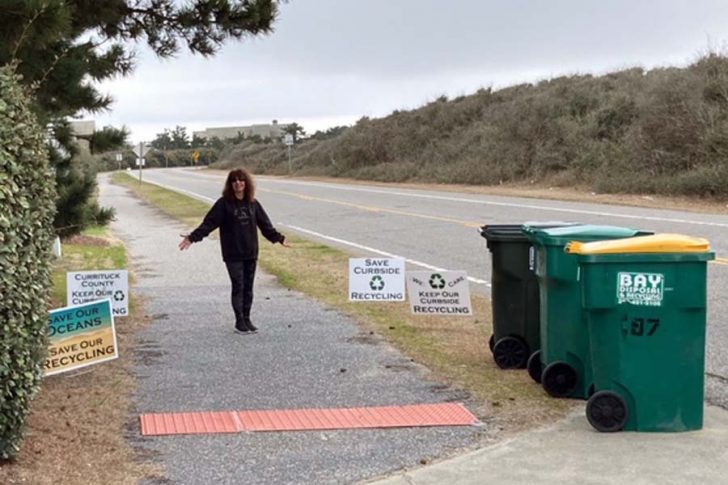 Citing increased costs, the county announced its decision last month to end the curbside recycling system. Beginning on April 4, residents would have had to dispose of recycled goods at the Pine Island Fire Station self-service containers. Under the existing system, recyclables are placed in designated bins, which are picked up curbside. In February, the county said it would cost residents and property owners an additional $39 annually to maintain the current system, though the county didn’t mention what the specific increase will be in its announcement Friday.

“Since announcing the original decision in February, the Board of Commissioners heard from many citizens of Corolla who supported the idea of maintaining the curbside recycling,” the county’s statement read. “Therefore, the Board has decided to continue its contract with Bay Disposal for the curbside collection of trash and recycling.  As a result, residents and property owners in Corolla will see a small increase in their solid waste bills.”

More than 500 people signed an online petition in recent weeks calling on the county to continue curbside recycling. Betsy DeLisle, a Corolla property owner, started the petition because she did not see the additional $39 charge as justification for ending the service. She also believes that ending curbside recycling and making it more difficult for people to recycle sends the wrong message to tourists.

“My rub here is that we’re here in ocean area…and now we’re going away from curbside recycling,” DeLisle said in a phone interview prior to the March 5 announcement. “I just don’t see how it wasn’t kept for thirty-nine dollars.”

Property owner Ray Toll, who rents his Corolla home during the summer months, said it wouldn’t be realistic to expect renters to drive to the Pine Island Fire Station to dispose of their recyclables. “They’re on vacation…As far as I’m concerned that’s an inconvenience they don’t need,” said Toll, who signed DeLisle’s petition. Toll said he reached out to some of his neighbors in the Ocean Sands community and almost all of them supported the idea of paying more to keep curbside recycling.

In addition to collecting signatures online, DeLisle also collected in-person and campaigned for her cause by posting about 200 lawn signs reading, “Keep Our Curbside Recycling,” along Route 12 in Corolla over the past couple of weeks. On March 1, she drove to Currituck to speak out at the Currituck County Board of Commissioners meeting and share her petition with commissioners.

Corolla resident Wendy Patterson, who signed DeLisle’s petition, said, “My husband and I were pretty upset about it, just the fact that the decision was made maybe without any input from the community,” she said.

The county started considering ending the curbside system in 2019, with the expectation that it would go into effect last year. However, the pandemic altered that timeline.

In the February statement announcing the decision to end the service, the county explained how broader, global factors impacting the financial viability of the U.S. recycling industry have led many communities to reconsider or end their curbside recycling services, including Dare County.

The county also said in February that many of Corolla’s recycling loads were “being turned away by purchasers due to the presence of non-recyclable materials.”

Other towns on the Outer Banks have moved to a subscription-based system of curbside recycling due to the issues with the global recycling market. Nags Head’s Board of Commissioners, after suspending their town-wide curbside recycling service last May, voted last month to provide subscription-based service to homeowners, for example. The monthly cost per residence is $14, however, the town is subsidizing $5 per month, bringing the final price down to $9.