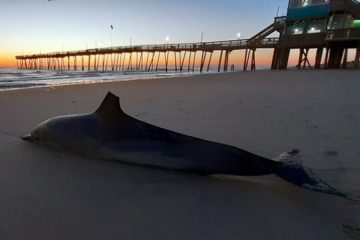 The photo of this stranded common dolphin was taken near Avalon Pier on the morning of March 8. According to Karen Clark of the Marine Mammal Stranding Network, the dolphin was discovered on March 7. She said it appeared to be an adult male weighing about 240 pounds with nothing “external” to signify illness or injury.

Clark said that under normal circumstances, “we would like to necropsy an animal like that,” but given several issues, including some related to the COVID pandemic, one would not be conducted in this case. The town of Kill Devil Hill is planning on burying the dolphin on the beach. The animal’s fin is marked so it can be identified if it washed out to the ocean and eventually comes back.