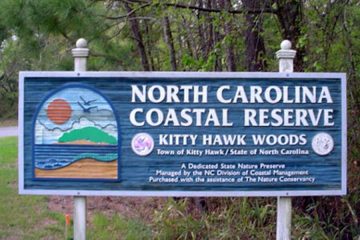 In an effort to preserve access for bike enthusiasts to trails in the Kitty Hawk Woods Coastal Reserve, the Kitty Hawk Town Council on March 15 voted unanimously to decline a $69,408 Parks and Recreation Trust Fund (PARTF) grant. The grant would have helped with the construction of a 500-foot elevated boardwalk trail to connect Kitty Hawk Town Park with a trail in the town-owned portion of the preserve.

The special meeting was called to gauge public sentiment after town officials learned that a condition of receiving the grant included signing a Memorandum of Understanding (MOU) that would prohibit bikes and horses on town-owned land within the preserve. While Coastal Reserve staff have rescinded the horse prohibition, Mayor Gary Perry said they have remained steadfast on the bike ban.

Further frustrating town officials and avid bicyclists who use it for mountain biking and other recreational biking, “No Biking” signs began appearing on some of the trails in the preserve about two weeks ago. The postings followed more than 15 years of permitted bicycle use.

The Coastal Reserve land west of Kitty Hawk Road is owned by the state, with the land on the east side belonging to the town. The N.C. Division of Coastal Management (NCDCM) is responsible for the management of the entire Reserve. PARTF grants are awarded and administered by a 15-member Parks and Recreation Authority. NCDCM must sign off on the PARTF grant, and the state holds a conservation easement on the land where the connector trail is proposed.

About a half dozen members of the public spoke during the March 15 meeting, and a crowd of almost 50 turned out to voice support for the continued bike access to the trails.

One of those was Kitty Hawk resident and mountain bike enthusiast Paul Henrigues, who said he has been riding the trails for more than 15 years and that it wasn’t until two weeks ago that Coastal Reserve staff began posting “No Biking” on the trails.

Kitty Hawk resident Jeff Scott told council members he has been back on the Kitty Hawk Woods trails probably 100 times over the last year and supports sharing it with bicyclists, who he said help to maintain the trails as well.

“Occasionally, I’ll run into someone on a bike back there and never had a problem with any of them. They are always friendly and I’m fine sharing the trail with them,” Scott said. “And I think it would be good to keep people off the roads. They are a lot safer of a place than being on the side of one of these roads…”

For her part, Nags Head resident Valerie Netsch told council that she was struck on her bicycle in Southern Shores 10 years ago and the Kitty Hawk trails offered a safe place for bicyclists to ride. “

When you are out in the woods and you’re in nature, you don’t have the cars out there and it is just really needed,” she said.

Following the March 15 vote to reject the grant, the Kitty Hawk Town Council reached a consensus to pursue the project on its own – without the portion of state funding that was announced in January. The town has also received $47,592 from the Dare County Tourism Board in Short Term Restricted Grant Funding for the project.

“Acceptance of the PARTF grant commits the town to acceptance of whatever Reserve program staff decides to impose in order to sign off on the contract,” Mayor Gary Perry asserted. “That acceptance also limits town pushback on uses such as biking on trails.”

On the other hand, the mayor said that using town funds for the connector trail would remove any need for an MOU since it would be a town-owned project connecting county property to municipal property. “It also puts us in a better position to fight for continued biker use of the trails that were in use for years prior to the recent restrictive postings,” he added.

The connector trail, town officials have said, would provide Coastal Reserve users with parking at the existing Kitty Hawk Park parking lot, an amenity that doesn’t currently exist at the Reserve’s trailheads. Often, visitors to the trails must park along rights-of-way, or park and walk to the trailheads.

NCDCM Public Information Officer Christy Simmons, in an email response to the Voice, said that it was not the intent of the division to restrict mountain biking or other trail usage in response to the proposed connector trail.

“The intent was to discuss the environmental impact of the connector trail and the potential for use conflicts based on the existing management plan,” Simmons wrote, noting that the division is reaching out to the Town of Kitty Hawk to discuss potential solutions.

Simmons added that the “No Biking” signs were placed on a single tract of the preserve “where there was unauthorized trail building, tree cutting, hole digging and ramp building in the Reserve, in order to protect habitat and cultural resources.”