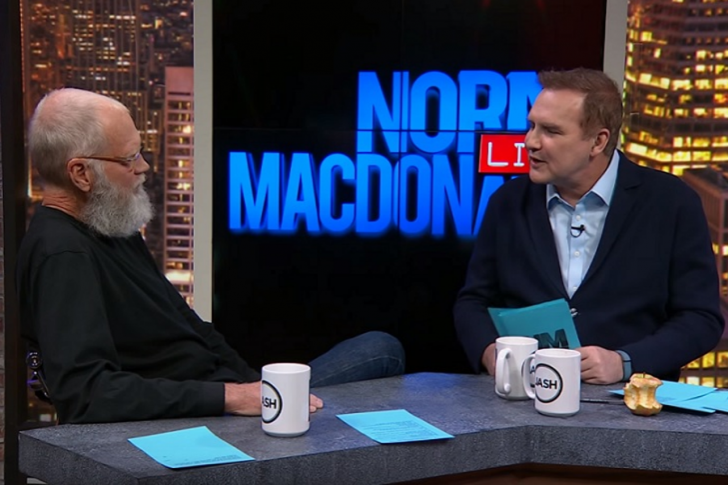 One of the writers on Roseanne Barr’s eponymous 1988 sitcom was Norm Macdonald, who was also presentable enough to have some guest spots as an actor on The Drew Carey Show and [NewsRadio]. In 1993 he joined the cast of Saturday Night Live and became known as the caustic Weekend News Update Anchor, entering the popular consciousness with a splash, but finally getting fired from SNL for repeatedly going after [O.J. Simpson], a friend of SNL producer Don Ohlmeyer. It was a case of Norm being Norm, who counts among his fans virtually every comedian working today, from Adam Sandler to Jerry Seinfeld to Dave Letterman, actors such as Billy Bob Thornton, and even Mike Tyson, on whose animated comedy The Mike Tyson Mysteries Norm currently acts.

In 2013, having gained some years and weight, Norm hosted a video podcast on [YouTube] (which was removed from there save six episodes by Netflix when Norm signed up with them). On SNL, Norm had been [young, handsome and sophisticated]; lately he’s been playing up the rustic Canadian Norm, who refers to himself as an “old chunk of coal.” On Norm Macdonald Live he hosted top comedians and actors, with sidekick Adam Eget, the manager of The Comedy Store in Los Angeles, in a talk format. [Here is a list of the epsodes], all of which can be found [online].

In each 60-minute episode Norm and Adam, who Norm refers to as “Adam Egret,” begin with a semi-scripted neo-vaudevillian exchange, in which one will usually passive-aggressively taunt the other, and then engage the guest (which included Jerry Seinfeld, Larry King, Carl Reiner, Billy Bob Thornton and others) in conversation, which is usually funny and fascinating. Russell Brand exhibits his surprising intellectual humanism on prodding by Norm; Jerry Seinfeld (on whose show [Comedians in Cars Getting Coffee] Norm also appears) and Norm trade jokes and observations; and Billy Bob Thornton describes Sling Blade, his vegan diet, [Kinky Friedman], and how he trained his mynah bird to speak by playing Captain Beefheart records for it.

In the final segment Norm hands out jokes on cards for himself, Adam, and the guest to read, but, Norm being Norm, often great bad ones that prompt the query, “Who wrote these?” 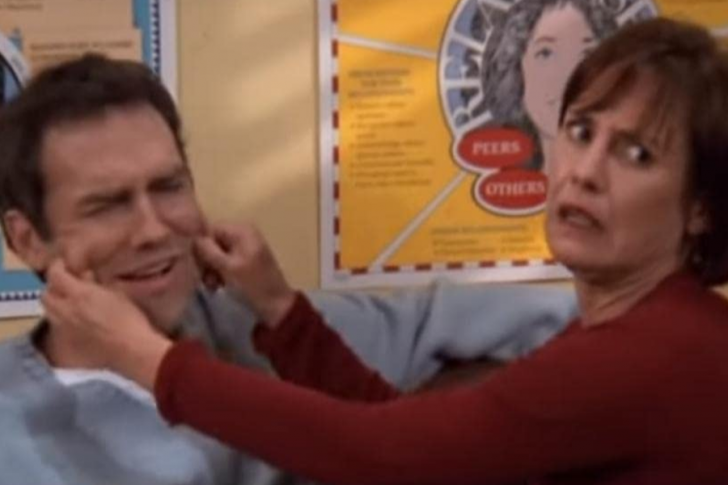 Norm Henderson is an ex-hockey player who, banned from hockey for life for gambling and tax evasion, must serve five years of community service as a social worker, or go to prison. (IMDb.com)

Originally airing on Wednesday nights after The Drew Carey Show, Norm’s series was one of the top-rated sitcoms on ABC among adults 18-49 during its first season. Norm’s colleague from Roseanne, Laurie Metcalf, joined, along with Faith Ford (Murphy Brown) and Artie Lange (Mad TV), in a show about “Norm Henderson,” a cynical yet carefree ex-pro hockey player sentenced to five years community service for tax evasion—as a social worker. Guest stars included Vicki Lewis [NewsRadio] and Abe Vigoda [Barney Miller] (including a parody of one of his scenes from The Godfather).

It’s a very funny show; Norm’s character is cheerful and larcenous, and Laurie Metcalf plays his social worker and officemate, who has her hands full with Norm and her own quirks. Co-creators Bruce Helford (Roseanne) and Norm were head writers, so it comes across almost as a commentary on sitcoms, with pat situations taken to outrageous levels, featuring surreal dialogue and a meta subtext, also known as Norm being Norm.

Problems arose when ABC started moving the show around, shedding viewers with each move. I’m thinking the studio execs didn’t “get it,” but the good news is that while Norm doesn’t even seem to be streaming, the whole series has been put onto [YouTube], so it’s easy to check out. It’s a sleeper.

Next time, creepfests Dexter and You.