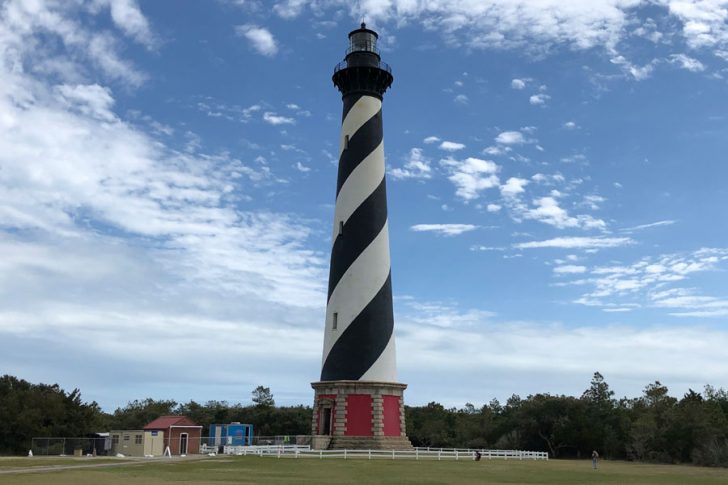 Removing paint from the inside walls is the first step of the lighthouse project. (National Park Service)

The Cape Hatteras Lighthouse looks great for its age. And the iconic attraction plays host to about 500,000 annual visitors while some 1,500 people climb the lighthouse daily between April and October. But at 150 years old, there’s some work that needs to be done. As a first step, a contractor is starting the task of removing the paint from the inside walls.

The interior work marks the beginning of a major restoration of the lighthouse that is expected to take at least a year. According to the National Park Service (NPS), the full project will include repairs on everything from deteriorated masonry to marble flooring to the lantern. Missing interior doors will also be restored and the interior and exterior of the structure will get a new coat of paint.

Tests have now begun on the best way to remove paint from the exterior. Jerome Kirkland, NPS Preservation Specialist and Construction Management Representative for the current phase of the project, points to the need to preserve the historic integrity of the lighthouse. “Within the Park Service, that’s our first priority,” he said.

The initial phase will take at least three months according to the NPS, and if completed in time, will allow for a shortened climbing season. But in a structure as old as the lighthouse, there is no way to know what will be found as the paint comes off.

“In most of our projects, we try to include a buffer funding of at least twenty percent. We know if we peel the paint off these brick walls, the paint might have been hiding something. Something that has to be repaired now, so that it will still be here in three to five years,” Kirkland explained.

It is not just one coat of paint, he notes, adding that. “I’ve already counted five coats of paint in some areas.”

The paint is removed using a citric acid compound that is completely biodegradable. “We just brush it on,” Kirkland said. “We leave it on for about twelve hours, it penetrates the paint. We come back with a plastic scraper so that we don’t damage the brick, and that paint will peel off. Then we apply a second coat, and…we do that until we remove enough paint to expose the brick.”

The hope is to restore the lighthouse to its original look, and science plays a significant role in that. Kirkland points out that the color of the original paint of the interior may be determined by a microscopic examination of the layers of paint done in a lab.

It is also possible, he says, that the original walls were whitewashed. “Back then they’d oftentimes use a whitewash, which is more of a lime base…that would have actually absorbed into the surface of the brick. It wouldn’t have been until probably a decade or two later that they started to paint masonry surfaces,” he said.

The masonry is where some of the most significant questions about state of the lighthouse may have to be addressed.

The Cape Hatteras Lighthouse was built using a double-walled construction. There is a hollow space between the inner wall and the outer wall until the two meet — in this case, at approximately 130 feet. Although the air space between the two walls would be sealed, the NPS is testing to see if heat and humidity is affecting the masonry.

The double-walled construction was fairly new way to build a tower when the Cape Hatteras Lighthouse was built, and it may have been the first in the nation erected using that technique. It was more expensive than other methods of construction, but the double walls gave the lighthouse considerably more strength than other forms of construction.

‘They were artisans. They understood their art’

Although there was a lighthouse at Cape Hatteras that predated the current one, it was considered hopelessly inadequate.

In 1852, Navy Lt. David Porter wrote of that lighthouse, “In nine trips I made I never saw Hatteras light at all, though frequently passing in sight of the breakers, and when I did see it, I could not tell it from a steamer’s light, excepting that the steamer’s lights are much brighter.”

The Lighthouse Board, aware of those shortcomings, was determined to not make the same mistake with the new lighthouse.

“In a tower so expensive and exposed as the new one proposed for Cape Hatteras will be, it is desirable to take every measure to secure the very best materials. Quality is a much greater object than price,” the 2016 Cape Hatteras Lighthouse Historic Structure Report reported the Lighthouse Board writing.

That same concept of building the best structure possible was also on Lighthouse Board Acting Engineer WJ Newman’s mind when he suggested the double-walled design in 1868.

Kirkland, however, gives credit to more than the materials and design.

The evidence of that is in how well the Cape Hatteras Lighthouse has stood the test of time. It survived the Charleston Earthquake of 1886, estimated to have been between 6.6-7.3 on the Richter scale, whose effects rippled up the coast.

“The tower would sway backward and forward like a tree shaken by the wind. The shock was so strong that we could not keep our backs against the parapet wall. It would throw us right from it,” the lighthouse keeper reported.

The lighthouse sustained no visible damage.

It has also survived innumerable hurricanes and its famous relocation of 2,900 feet in 1999.

There has even been some recent evidence of how well the lighthouse was built. Graffiti was scratched onto the bronze door of the lighthouse earlier this month. A clear acrylic will be applied to repair it, but according to Kirkland, the scratches in the bronze will not permanently harm the door.

“That old bronze door, it will take decades for that type of graffiti to cause any true damage,” he said.  “A modern door would be bronze plated. And that single graffiti would permanently harm the door.”