‘It’s stacked against the ordinary citizen’ 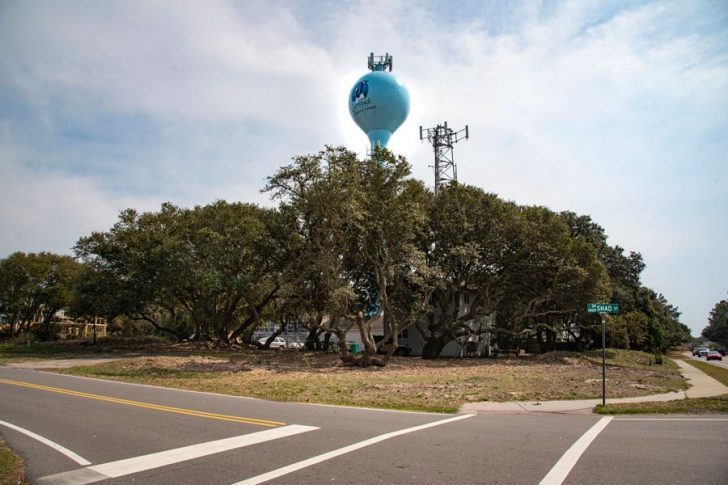 A developer plans to build eight dwelling units and a restaurant, along with several other recreational amenities on this 0.92 acre parcel at the intersection of Ocean Trail and Shad Street in Corolla, pictured March 26, 2021. (Photo by Bailey Wright)

Earlier this year, a group of Corolla residents tried to lobby the county to deny a special use permit to a local developer who was seeking to put a restaurant, eight housing units and several recreational amenities on a nearby .92-acre parcel that also houses a large water and telecommunications tower.

Residents worried the project’s high density, along with the unusual mix of residential, commercial, and utility uses, would mismatch with the surrounding neighborhood, lower property values and lead to increased traffic in a busy area of Route 12. The site, at 1099 Ocean Trail, is located at the intersection of Route 12 and Shad Street and is part of the 240-acre Corolla Light planned unit development.

Some of the residents outlined their concerns in a letter to the county, and a few spoke in opposition at the Jan. 19 hearing where the project was presented to the county’s board of commissioners. The county’s professional planning staff echoed many of the residents’ density and incompatibility concerns and recommended denial of the permit in a staff report.

But due to standards and procedures in North Carolina state law for how use permit applications must be handled, the board’s seven elected members couldn’t consider any of the public’s input in voting 6-1 to approve the application.

State law doesn’t allow local decision-making boards to consider public opinion for certain matters that are considered “quasi-judicial,” not legislative, in nature. Effectively, this system can make it very difficult for residents to fight an unwanted development and can weight the process in the favor of developers, many say.

“As someone who wants everyone’s opinion represented and heard, with our use permits being quasi-judicial, it’s stacked against the ordinary citizen who just wants their opinion at least listened to,” said Laurie LoCicero, Currituck County’s director of planning and community development.

Unlike some other states that give local governments more freedom with zoning procedures, North Carolina sets laws for how every county and municipal government must handle different matters.

The law considers matters that seek to modify zoning regulations, such as a rezoning or zoning amendment, as “legislative” decisions and allows decision-making boards to hold a public hearing and use public input as a basis for their decisions.

But for matters that require a board to decide whether an application follows pre-set regulations — use permits and variances, for example — the law stipulates that boards can only consider relevant facts and evidence in their decision. Quasi-judicial matters like use permits are handled through an evidentiary hearing that is handled much like a court proceeding with the applicant’s attorneys submitting exhibits and evidence and calling expert witnesses to testify under oath. The applicant must argue that its application meets four criteria set out in law. The project must have adequate public facilities to support it; comply with land use plans; not endanger public health and safety; and not injure the value of abutting properties and also be in harmony with the area.

If a resident speaks at an evidentiary hearing for a use permit and expresses an opinion or general concern about a project, that testimony cannot be considered by the board.

“You have to get expert witnesses,” LoCicero told the Voice. “And if you have a concern like traffic, you can’t just stand up and say, ‘Hey, it’s going to create more traffic and I didn’t buy into this place to have a bunch of traffic.’ You have to say, ‘The homeowners’ association hired a traffic engineer, and he estimated [traffic will increase].’”

The majority of the public isn’t even aware of the different standards and procedures for use permits and variances or how to approach it, LoCicero said.

Currituck Commissioner Bob White, Corolla’s lone representative on the board, said he’s actively tried in recent years to steer residents in the right direction. When a development company recently applied to put a sand mine in Powell’s Point, for example, White advised a large contingent of residents opposing it that they needed to hire an attorney and experts.

“If you really think about it, [the system is] designed to help out someone like [Shad Street project developer] Rick Willis, to help him get his project approved,” White said. “Because most of the time, the average homeowner isn’t going to spend ten thousand dollars on an attorney and an appraiser and an expert in this and that, whereas that’s just built into the budget of a project for something like this.”

“That’s the thing that most people don’t understand,” White added, “that we may be compelled to vote for something even if we don’t want to because they have presented their case, there hasn’t been an opposing case to offer contrary evidence, and in the absence of that, we have no choice… It makes it hard for you to do what your community wants. You can be one hundred percent at odds with what your community wants.”

The requirement that local governments hold quasi-judicial hearings for use permits and other matters has been in state law for decades, according to Scott Mooneyham, director of political communication and coordination for the North Carolina League of Municipalities.

Over the years, pro-development lobbying groups have pushed for changes to the law that limit what information can be considered during approval processes, Mooneyham said.

“The net result is that both the local government and the residents become more hamstrung in how they can respond,” he said.

As an example, he cited legislation proposed this year that, among other many changes, would effectively block residents with traffic concerns from submitting their own traffic study if the developer’s study showing traffic wasn’t an issue has received approval from the state Department of Transportation.

Technical changes such as this, Mooneyham said, can easily fly under the public’s radar.

“It’s hard for the general public to understand their overall effect, which is, in fact, to impede their ability to have a voice in how development proceeds in their community,” he said. 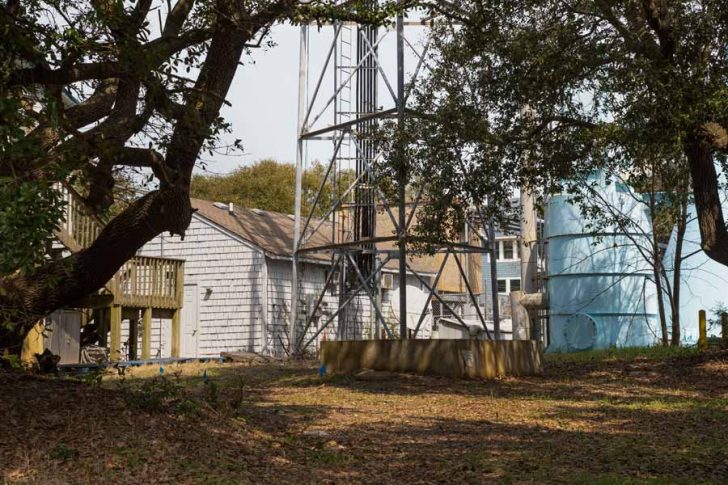 White, who voted to approve the Shad Street project, called it an “odd duck” at the public hearing due to the mixed uses the project will create, and voted to table the application so he could have more time until the next board meeting to consider it.

The restaurant will be located in an existing two-story building on the site. That building will be expanded to three stories and two dwelling units will be in the two stories above the restaurant. The other six dwelling units will be located in two three-story buildings on the southeast portion of the property, with one unit on each floor. The project also includes 23 total parking spaces and amenities like a swimming pool, playground area, dog park, garden area, and a cornhole court.

With the way the site is configured, residents will have to walk within feet of the utility infrastructure to access amenities in some cases, according to the discussion at the public hearing.

The unusual makeup initially gave White pause, but he ultimately concluded having utility infrastructure next to a residential area wasn’t that uncommon in the county. The site used to have a water treatment plant, but that was removed around 2017, and White said there’s no longer operational activity at the site for the water or cell tower.

“Other than someone going into a water tower once every blue moon to check some valve or something, there’s nothing happening there,” he said.

Neighbors and management of Corolla Light Resort expressed more concern about housing being built underneath the towers and near utility easements.

“Everything about the co-location of all these existing uses with the proposed new uses really troubles me as a professional,” Pat Roberts, assistant general manager of Corolla Light, told commissioners at the hearing. Roberts previously worked in local government in 20 years, including about 5 years as city manager of Suffolk, Virginia, and testified that he has direct experience “citing, financing, constructing and replacing” utility towers.

“At the point that any of these things have to be maintained, there are points for conflict,” Roberts said.

“The project was not designed or planned from the outset as future mixed-use development, and this is evident by placement of buildings on the property that do not appear to be a compatible mixture of residential, non-residential, and utility uses,” County Planner Jennie Turner told the board. “The existing utility uses on-site make it difficult to design an aesthetic project that is compatible with high-density residential use.”

The developer, Rick Willis, didn’t return Voice requests for comment. Willis said at the hearing that the property, which he has lived at since 2012, has been “ripe for redevelopment” because the water plant is no longer there. In response to safety concerns, Willis agreed to put up fencing around utility in areas of concern.

The site has been zoned for commercial use since 2008, before which it was designated for utility and open space. Willis needed a use permit for the residential component.

A certified appraiser also testified the property is not currently at its highest and best use and that Willis’s project would improve the property. The appraiser, Steven Craddock, told the commissioners the project would not injure the value of adjoining or abutting land and would be in harmony with the area.

The only commissioner to vote against the use permit, Mary Etheridge, did not voice her reasons for voting nay at the meeting and didn’t return requests for comment.

Barbara Heffernan, a resident of nearby Austin Street, said she felt the board “totally ignored” the opinion of the community and county staff and called the decision “unsettling.”

“The way the thing is set up, it appears to be very difficult to successfully oppose one of these things,” said Clark Hoyt, another Austin Street resident. “This is a case where the professional staff of the county said, ‘Wait a minute, stop,’ and was ignored. If ever there’s what appears to me to be a questionable development, this is it.”

White said it’s not that unusual for the board to go against a recommendation by staff because staff’s interpretations of land use policies are “much more rigid.”

“It happens, more frequently than not probably, where they don’t like something and we do something different,” White said.

When making the recommendation, LoCicero, the county’s planning director, said that, given how hard it is to factor public sentiment into a quasi-judicial hearing, staff may have “erred on the side of caution” with their recommendation.

“We may have probably, at least on that one, maybe erred on the side of caution,” she said. “Like, do you want eight units of density in this commercial area on not even an acre parcel?”

In addition to residents, the Corolla Light Community Association as a whole also opposed the project, which is included in the development’s masterplan. Unlike many average citizens, the association is familiar with the county’s zoning procedures and standards, White said.

“It would have behooved them to bring someone in, and that would have given us the ammo, if you will, to deny it.  But ultimately, we really didn’t have a leg to stand on because no one was there presenting competent evidence,” White said.

Note: The reporter resides part-time in the Corolla Light development a mile away from the development site.