WHAT TO WATCH ON TV
Stream On: ‘Just one more thing’—Columbo … and Dostoevsky 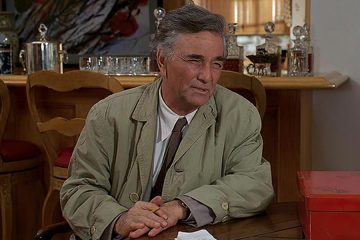 Like many of my contemporaries, I started reading Dostoevsky in high school, with Crime and Punishment, about a student who kills “because he can” and the dogged detective who pursues him. In 1968 I was watching the TV movie Prescription: Murder, featuring another detective who worked his cases like a dog worries a bone, a shabby fellow named Columbo. He felt very familiar.

The character of Los Angeles Homicide Lieutenant Frank Columbo, played by Bert Freed, first appeared on TV in a 1960 episode of The Chevy Mystery Show written by Richard Levinson and William Link, adapted from their story “Dear Corpus Delicti,” published in Alfred Hitchcock’s Mystery Magazine. This was in turn developed as a stage play, which was filmed in 1968 as the TV movie Prescription: Murder. It wasn’t so much a whodunit as a “howcatchem” in which the murder and its perpetrator are shown in the first act, and the subsequent investigation provides the drama.

The character of Columbo was handled this time by Academy Award nominee and Emmy winner Peter Falk (It’s a Mad, Mad, Mad, Mad World). In contrast to the typical high-society milieu of the murderer, Columbo was a disheveled blue-collar cigar smoker whose later idiosyncracies weren’t especially played up—but his essential traits were: he was friendly and unassuming, bumbling at times and making disarming circumstantial remarks, such as when he visits a suspect’s cozy office, the man being a psychiatrist: Columbo says his sister-in-law has an intimidating modern living room. “The moment I sit down I can’t say anything. She’s got this big kidney-shaped coffee table—it upsets me just to look at it. She has a husband and he doesn’t say anything; I figured the coffee table got to him years ago.”

The suspect: “What can I do for you, lieutenant?”

“Oh, I just came here to return your pen—I forgot to give it to you at the inquest.”

And after a beat, “There is one thing…”

Columbo wears down his suspects with these tactics, often capping his interviews with multiple encores: halfway out the door, he’ll distractedly stop and say, “Just one more thing, if you don’t mind…” while constructing an air-tight case against his supercilious and unsuspecting prey.

Prescription: Murder was a success, which led to Ransom for a Dead Man; these are now regarded as the two pilot episodes for the Columbo series, which at first shared a time slot with three other recurring NBC Mystery Movies, as busy movie actor Falk balked at producing an episode a week. The so-called first Columbo episode, “Murder by the Book” (1971), was written by Steven Bochko (NYPD Blue) and directed by Steven Spielberg, and the popular series attracted scores of A-list guest stars, writers, directors and composers; Falk’s friend Patrick McGoohan (The Prisoner) appeared four times, as four different villains, and directed five episodes. The show was a cut above other mystery series like Murder, She Wrote, and holds up very well to this day. 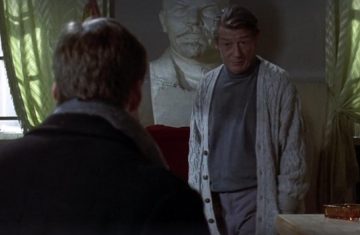 Porfiry Petrovitch is the relentless investigator looking into the murder of a pawnbroker and her sister in Crime and Punishmen. (MGM)

Fyodor Dostoevsky’s 1866 novel Crime and Punishment [read or download it here] focused on the mental anguish and moral dilemmas of Rodion Raskolnikov, an impoverished ex-student, who formulates a plan to kill an unscrupulous pawnbroker for her money. The investigator who targets Raskolnikov, Porfiry Petrovich, was identified by Columbo co-creator William Link as an inspiration for the L.A. detective. Dostoevsky began his novel, which was also perhaps the first “howcatchem,” as an indictment of Russian nihilism, a movement growing in popularity after the attempted assassination of Tsar Alexander III; its protagonist Raskolnikov sought to proactively take control of his life by murdering a “useless” member of society and taking her money in order to finance his own “good deeds.”

There have been more than 25 film adaptations of the novel, including a 2007 Russian TV series; three are streaming that I found, a 1959 interpretation in which George Hamilton plays “a Santa Monica law student,” a bizarre 2015 film featuring a “talented Ph.D. student,” and my choice, Crime & Punishment, a 2002 American-Russian-Polish drama film written and directed by erstwhile shlockmeister Menahem Golan and starring Crispin Glover (Back to the Future) as Raskolnikov and John Hurt (Alien) as Porfiry Petrovich. This film updates the action to the late 20th century, but is otherwise faithful to the setting (a dreary Moscow) of the novel.

The movie reduces Raskolnikov’s motivation to the Nietzschian idea of the Super-man or Übermensch, even though Dostoevsky’s book predated Thus Spake Zarathustra, in which Nietzsche aired these theories. Dostoevsky’s narration is unfortunately excised, Crispin Glover walks about as if in a trance (which turns out to be a good choice for the story), and Margot Kidder chews the scenery with abandon and flecks of spittle, but this production does at least attain the level of—well, the Columbo episodes, mainly due to John Hurt’s excellent performance.

Roskalnikov, at one point taunting Porfiry Petrovich about his methods, could be describing an episode of Columbo.

Next time, Low friends in high places: I, Claudius and The Borgias.