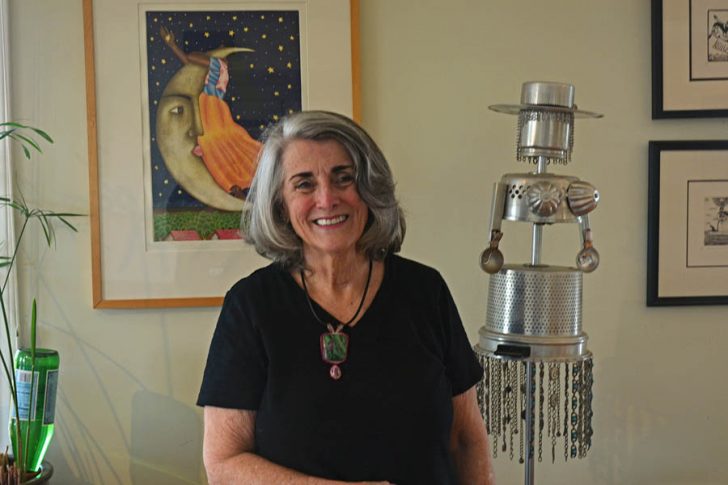 Niki Taylor may hate meetings, but she loves the hands-on aspect of volunteering. (Photo by KIp Tabb) 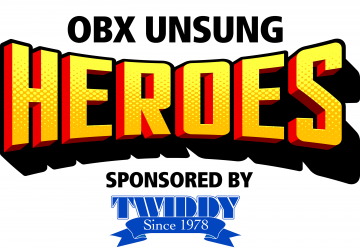 Niki Taylor has been forced to pull back from her volunteering. Not by choice, but by pandemic.

If it weren’t for COVID restrictions, she would still be there at the Dare County Arts Council two or three days a week. Or at the STAR center at the Aquarium on Roanoke Island explaining about turtle behavior for the Network for Endangered Sea Turtles (NEST) or at the Touch Tank encouraging kids to get up close and personal with the sea life.

When the Mustang Outreach music program is up and running again, she’ll be in the wings, wrangling the young musicians together so they’re ready to go on stage when it’s their turn. And she has also worked with Ruthie’s Kitchen, the Outer Banks church organization that takes to heart “feeding the hungry” by serving dinner once a week to all who come.

After 35 years of teaching in Philadelphia, Taylor wanted a change and the stars lined up to bring her to the Outer Banks. Her cousin, musician Ruth Wyand, had moved to the Outer Banks. Ruth and her husband Chris were on tour in New Zealand and Taylor was dog sitting for them in Colington.

While down here, she saw some snow fall, but the only evidence of it was a tiny bit of the pristine white stuff on the grass. A few days later she returned to Philadelphia and experienced a different kind of snowfall.

“The snow was up to my waist, and it was filthy dirty, and I was annoyed. I was just tired of pollution,” she said. “The following Wednesday, I came down and found a rental.” Although she had moved, she wasn’t sure how permanent the move would be.

“I didn’t think I would find enough to do because I was really busy in Philadelphia. So I rented because I figured I was going to have to book out of here. But it’s such a good community, and there’s a lot to do — and the air is nice,” she said

Taylor, who moved here in 2011, had never been one to sit around wondering what to do with her time. She was 15 when she took on her first volunteer task. “I started off tutoring an old man, to teach him how to read,” she said.

When she was living in Philadelphia, in addition to teaching, she put her culinary skills to work.

“At my church in Philly, I would cook for a hundred people every Sunday,” she said, although when she got to the Outer Banks, she didn’t include that in her volunteer resume.

Now a part of the local community, she began to look for volunteer opportunities.

“I was looking for someplace to volunteer and so I went to different places,” she said. “I went to the Aquarium and the man who ran the souvenir shop took me by the hand and introduced me to the volunteer coordinator. It was her first day and my first day.” It was an ideal match.

“I like someplace that teaches me things, so I didn’t really know much about aquarium critters when I started, but the Aquarium is very good at helping, so it was a good fit for me,” she said.

She also headed over to the Dare County Arts Council (DCAC) in Manteo to see if they needed help. Once again, somebody new was coming in and Taylor fit right in.

DCAC Executive Director “Chris Sawin was just coming in and I fit in…when there’s a transition. I’m good working when there’s a change because I’m so flexible. We just became a good team,” she said.

What makes her such an effective volunteer, she feels, is how she views what she does. She is not looking for a leadership position and isn’t interested in a decision-making role. Taylor just likes volunteering.

“I like to do the work. I’m perfectly happy with someone else coming up with the projects. Sometimes I have an idea for a project and then you know it will happen.”

“But I can’t stand meetings,” she added.

Taylor has always worked, always been hands on.  “I’ve always done everything on my own,” she said. “I signed up for classes on my own. “If I want to learn to swim, I signed up.”

That included Temple University in her native Philadelphia where she graduated with a degree in early childhood development. The program she went through was designed to help the struggling schools in the city.

“They started a program to train teachers to teach in the inner city. It wasn’t like the teacher core [curriculum] that had high grades to get into.” Instead, this course was designed to “see who really wants to be a teacher, and the grades are not going to be as important as the other stuff,” she said.

That degree and that other stuff, including a love of teaching, led to Fairhill Elementary School in Philadelphia where she spent her entire career.

“I taught kindergarten to eighth grade. I helped the principal, and then I [taught] social studies, and I was a librarian and disciplinarian,” she said.

The school, located in a rough area of Philadelphia, closed in 2013.  But when Taylor was there, it was a safe haven for the kids.

The lessons Taylor learned about pairing her skills with a task she loves have endured and become a part of why and how she volunteers.

“I find a place that’s welcoming for me, and that matches my skills,” she said. “I learn something. I talk to new people. I help people here in the tourist area where we live. I’m able to help people have a good time because I know so much about different things and places. I get more in the volunteering. It’s always been there for me.”