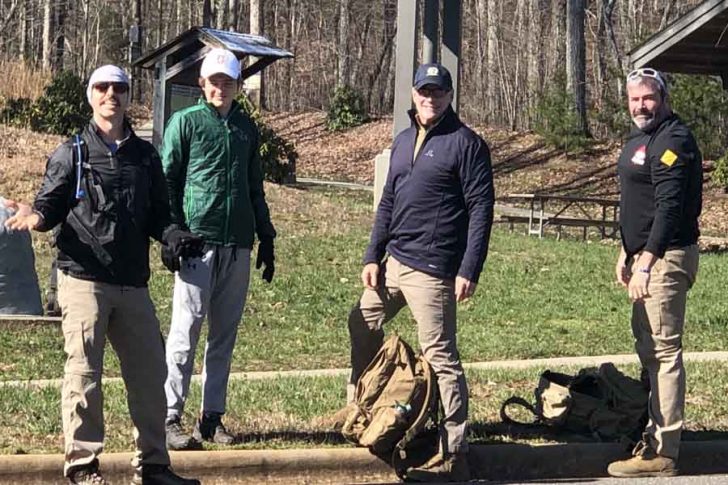 A few members of the group that will march in Ocracoke in honor of the Bataan Death March. Sergeant Kyle Yancy of the Gaston County Police Department; Jack Dee, a junior at Gaston Day School, Phil Dee of US PATRIOT and Michael Ginther. (Photo courtesy of Phil Dee)

When the COVID-19 pandemic turned the annual Bataan Memorial Death March at the Sands Missile Range in New Mexico into a virtual event, Retired U.S. Army officer Phil Dee hit upon an ideal location for his group to hold their 26-mile memorial march.

Dee, of Kings Mountain, NC, will lead a group of seven, including his son Jack, on a march that will take place on Ocracoke Island on April 16. After taking the ferry from Hatteras to Ocracoke, they will hike 13 miles along the beach and N.C. 12 and then turn around and march back to the ferry dock.

The Bataan Death March of 1942 involved 75,000 U.S. and Filipino soldiers who surrendered to Japanese forces after the Battle of Bataan, according to the Bataan Memorial Death March website. Deprived of food, water and medical attention, they were forced to walk 65 miles through jungles and horrendous conditions to confinement camps. Approximately 10,000 soldiers – about 1,000 of them U.S. soldiers – died or were killed along the march. Those who survived were faced the hideous conditions and the brutality of their captors.

The soldiers captured represented multiple branches of the U.S. military, including members of the 200th Coast Artillery, New Mexico National Guard. There are only three U.S. survivors of the march still living today.

“It’s probably one of the most horrific [incidents of] POW treatments,” Dee stated, noting that many of the prisoners were put on what were called “hell ships” and transported to other islands. Dee added that his father was a Navy officer stationed in the South Pacific during World War II and that he had a cousin who had died on one of those ships.

“What these men have endured, physically spiritually and emotionally, is unlike anything any of us can even fathom,” he continued. “For ourselves, we all need to recognize that we can handle much more than we know. Just look at the Bataan survivors. On top of that, they learned to forgive. And that skill is probably what has saved them…Selfishly, we want our sons and daughters to know their story and try to understand what these men have done. And then apply it to themselves and know they can handle so much more than they think.”

Dee said that when the group was deciding where to do this year’s march, they settled on the Outer Banks, agreeing that would be interesting to do it there and that the unpredictable weather adds a challenging element. The group and trip are being sponsored by US PATRIOT Tactical, a military and public safety gear and uniform company that Dee is a partner in.

Dee’s group, which plans on catching the 5 a.m. ferry to Ocracoke to begin the march, is among between 7,000 and 8,000 people across the country registered for this year’s virtual event that can be done anytime between April 9 and 18.

Dee and his group are shooting to return to the Ocracoke ferry dock for the 3 p.m. ferry and knowing that they will be without supplies or water until they reach Ocracoke Village, they will carry in what they need.

Noting that he is a former tank commander with the U.S. Army and his wife, Sandie, is a former U.S. Army pilot, Dee acknowledged that those they are honoring “are our people.”