WHAT TO WATCH ON TV
Stream On: Low friends in high places—‘The Borgias’ and ‘I, Claudius’

Rodrigo de Borgia, at left, became known for corruption, libertinism and more corruption. He was also elected Pope in 1492. (IMDb.com)

Certain historical stories make for irresistible television—the notorious Borgia crime family, who used bribery, intimidation and murder in their relentless quest for wealth and power, including the papacy, and the memoirs of Claudius Caesar, Emperor of Rome after the scandalous reign of Caligula and who named names as a historian. “Borgia” and “Caligula” both became bywords for human monstrosity, and these series spell out why.

After main titles printed over illustrations that might have come from Hieronymus Bosch’s “Garden of Earthly Delights,” The Borgias begins with a bang—well, the last rites—in Rome, 1492. “The church was mired amid corruption, Pope Innocent VIII was dying, and the Papal throne [one of the most powerful offices in the world at the time] was the prize desired by all.”

The pope, on his deathbed, asks, Who will restore the purity of the office? Cardinal Borgia (Jeremy Irons, Brideshead Revisited) says, “It shall be cleansed, your holiness, with the tears we shed for you. I swear before the living God,” to the consternation of future victim Cardinal Orsini (Derek Jacobi, I, Claudius), as Borgia is regarded as a bit of a knave (and a Spanish outsider). The other priests around the Pope’s bed fall in line and agree, eyeing one another.

Next we see a couple in the altogether, rolling in the hay, as it were. He is a cleric—Cesare, Borgia’s son. They are spied upon by the Cesare’s sister, Lucrezia (with whom Cesare is creepily close). Yes, that Lucrezia, and yes, it’s going to be that kind of a show.

When Innocent VIII finally kicks it, Borgia and his son begin a campaign of vote-buying among the College of Cardinals.

The resulting and subsequent manipulations and deceptions even within the large and wealthy Borgia family are every bit as dysfunctional and vicious as one might expect. Creator Neil Jordan (The Crying Game) avers that Mario Puzo based the Corleone family of The Godfather on the Borgia family. Sounds about right. 85% | 84% score on Rotten Tomatoes. 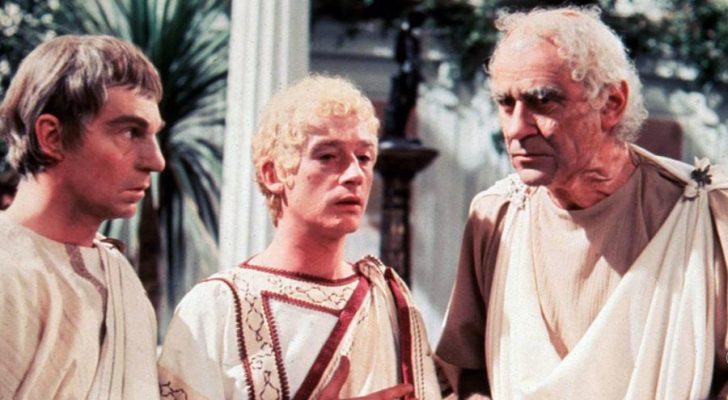 Claudius Caesar, at left, became Emperor of Rome after Caligula, despite being regarded as a simpleton. He also became quite the historian. (IMDb.com)

Tiberius Claudius Caesar Augustus Germanicus was born in 10 BC to Nero Claudius Drusus and Antonia Minor at Lugdunum in Roman Gaul, where his father was stationed as a military legate; he was the first Roman emperor to be born outside Italy. Because of childhood illness, he had a limp and partial hearing loss, and not much was expected of him. His infirmity probably saved him from the fate of many other nobles in the purges during the reigns of Tiberius, and Claudius’ insane nephew Caligula, as potential enemies didn’t see him as a serious threat. His survival led to him being declared emperor by the Praetorian Guard after Caligula’s assassination, at which point he was the last adult male of his family.

Claudius wrote throughout his life. During the reign of Tiberius, it became impolitic to speak of the republic in imperial Rome. The trend among young historians was to either write about the new empire or obscure antiquarian subjects. Claudius was the rare scholar who covered both.

None of his works survive, but are listed as sources in numerous subsequent histories. In 1934 Robert Graves put together a novel, I, Claudius, which is in the form of an autobiography; it’s largely fictionalized, but still based on historical events mentioned in the works of Roman historians Suetonius and Tacitus.

And TV history was made in 1976, when the BBC broadcast a series of 12 episodes based on Graves’ book and its sequel Claudius the God. In 2012, Mary McNamara of the Los Angeles Times credited I, Claudius with transforming the quality of television drama: “With its complex characters and multi-toned narrative, not to mention the high quality of writing, performance and direction, I, Claudius established a timeline that would eventually include the rise of HBO and all its cable competitors. This in turn expanded the palette and quality of network drama.”

With production values similar to early Doctor Who, or a 70s soap opera broadcast live, I, Claudius opens with an elderly Claudius (Derek Jacobi, The Borgias) recalling a prophecy that his story wouldn’t be heard for 1900 years (approximately 1976—get it?) and sitting down to write his autobiography. He also worries about being poisoned.

It was shot on videotape rather than film; that and the low-key studio sets give a feeling of authenticity and intimacy to the production, and the writing, direction, and acting are indeed superb. Jacobi, a founding member of the Royal National Theater, got his start in television with this series in which future stars Patrick Stewart John Rhys-Davies and John Hurt (Crime and Punishment) also appeared.

In the first episode we see the first emperor of Rome, Augustus (who seized power after the assassination of elected consul-turned-dictator Julius Caesar), looking to find an heir, and his wife, an expert poisoner, plotting to elevate her own son Tiberius, Claudius’ uncle, to the position.

By the end of this hair-raising series, we have seen wars fought, political rivals poisoned and decadence reign. Claudius’ deranged nephew Caligula becomes emperor, appoints a horse to the Senate and eats his own unborn son. Claudius goes into hiding, succeeds his nephew as emperor when he is rescued by the praetorian guard, invades Britain, and before his death (not a spoiler, duh!) buries a copy of his memoirs to be found later. 100% | 90% score on Rotten Tomatoes.