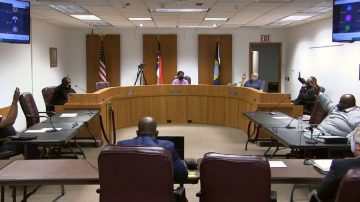 During an April 23 emergency meeting, the Elizabeth City Council unanimously approved sending a letter to the Pasquotank County Sheriff’s Office, District Attorney Andrew Womble and the State Bureau of Investigation (SBI) officially requesting the public release of the body camera footage from the fatal shooting of Andrew Brown Jr. by Pasquotank Sheriff’s Deputies on April 21.

The move comes amid increasing calls to release that footage and just one day after the Pasquotank County Attorney, Womble and the SBI issued statements saying the video could not be made public without a court order. It also comes as multiple media outlets report that three Pasquotank County Deputies have resigned in the wake of the shooting and seven others have been placed on leave.

The measure passed by the council also directs the city to send the same request to Superior Court if it is denied or ignored by the law enforcement officials.

In the discussion prior to the vote, Councilman Darius Horton said the decision to seek the release of the footage “speaks volumes…that we as a city have a voice and we have listened to the concerns of our constituents.”

The fatal incident occurred in the early morning hours of April 21 as Pasquotank County Deputies tried to serve a felony drug warrant on Brown, who has been described by Pasquotank County Chief Sheriff Deputy Daniel Fogg as a “convicted felon with a history of resisting arrest.” Witness and media accounts have said that Brown was shot as he tried to escape in a vehicle.

Pasquotank County Sheriff Tommy Wooten II has said that his deputies who were involved in the shooting have been placed on administrative leave. Dare County Sheriff’s personnel were also reported at the scene, but Wooten stated that it was his deputies that tried to serve the warrant and fired the shots. The SBI is now investigating the case and will report its findings to Womble.

The vote by the City Council in Elizabeth City came after members were cautioned by the city manager and city attorney that the city likely did not have legal standing to request that the footage be made public. City Attorney William Morgan said, “Our biggest issue as a city [is] ‘do we have standing to make this request.’” He explained that to have standing, the city “would have to have suffered some harm or have some reasonable connection to the issue.”

For his part, City Manger Montre’ Freeman explained that “we think the [request] will be denied.” But he did say that someone who is appointed executor or administration of Brown’s estate or his next of kin would likely have more success in trying to get the video made public.

Even with the likelihood of failure, members of the council made clear their desire to send a message by officially asking for the release of the video.

“I think we need to send [the letter],” declared Councilman Kem Spence. “We have to show people that we care.”

“Doing nothing is not an option,” said Councilman Michael Brooks.

Hanging over the meeting was a concern about potential violence that could visit the city’s streets if the situation isn’t handled properly.

“They will come here because of the lack of transparency and the lack of accountability, and they will cause destruction in our city,” said Horton.

And Freeman told the council that with the weekend coming, the city had to be concerned about so-called “nomads” who travel around to sites of unrest.

“I need everybody’s eyes on this matter,” he added. “We don’t want to allow any distractions.”