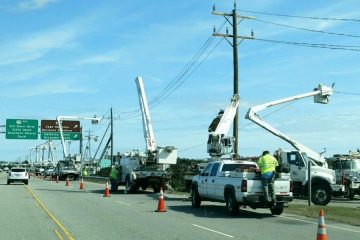 Storms, such as Hurricane Matthew in 2016, can wreak havoc on the power grid. (Town of Nags Head file photo)

As one of 11 communities nationwide recently selected to participate in the federal Energy Transitions Initiative Partnership Project (ETIPP), Nags Head finds itself in some interesting company — joining places like Kauai and Honolulu Hawaii, Ouzinkie and Sitka Alaska and Islesboro Maine.

What do these locations have in common? According to the U.S. Department of Energy (DOE), which is implementing ETIPP, they are “islanded communities in the United States seeking to transform their energy systems and lower their vulnerability to energy disruptions.”

The ETIPP program, the DOE says, is designed to help these communities figure out ways to “withstand, and recover from energy disruptions,” in places where they occur with some frequency.

Nags Head Director of Planning & Development Michael Zehner notes that the ultimate goal of ETIPP is to keep the lights on and town operations running when Nags Head is temporarily off the grid, given the region’s “susceptibility to emergencies and disasters [as well as] the frequently with which our electrical grid and services can be disconnected.” And the involvement of renewable energy sources will be a major factor in this effort.

“As an island community…I think there’s a larger benefit here in terms of what can renewable [energy sources] offer in terms of the long-term sustainability and resiliency of the entire Outer Banks,” he added.

The core of the project, Zehner explained, is the “technical assistance” that Nags Head will receive, particularly from two national laboratories — The National Renewable Energy Laboratory and the Sandia National Laboratories.

The project timeline is 12-18 months, according to Zehner, with the expectation that a final report containing recommendations and suggested outcomes will be ready in the summer of 2022. The first step, in the next several months, is to have an initial scoping meeting with the national labs — with the technical assistance phase scheduled to begin in June or July.

In what Zehner called a ‘separate but related” project, Nags Head has also received a grant from the North Carolina Chapter of the American Institute of Architects to receive technical assistance “to help develop some best practices for energy efficiency and water efficiency in building design.”

That project has a quicker turnaround time and is expected to be completed in early 2022. But Zehner notes that it will work “in conjunction” with the ETIPP project.

At the same time, one of the other 10 communities selected to participate in ETIPP is Ocracoke Island, with the goal there to work on creating an all-electric ferry service.

According to the DOE description, “Ocracoke is planning for an electrified future and is exploring electrifying its ferry fleet, which residents are dependent on for transportation to the mainland. ETIPP will analyze the additional grid infrastructure needs that come with an all-electric ferry fleet, and how Ocracoke can best prepare for this future.”

The Voice reached out to spokespersons for Hyde County and the North Carolina Department of Transportation (NCDOT) for comment on this project, but no one available at the time could do so.