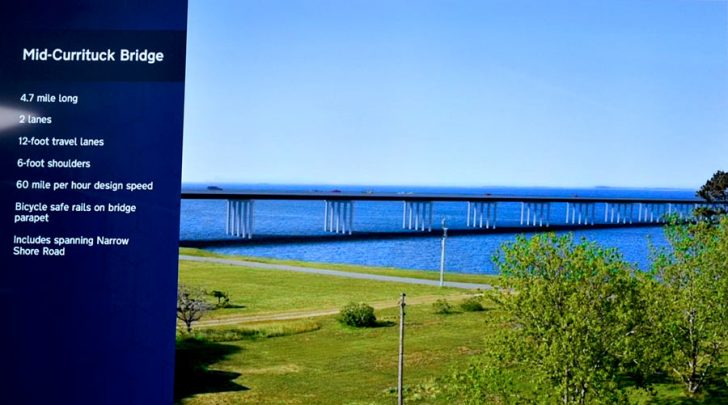 Southern Shores Council gets a briefing

For those hoping for tangible progress on the long-awaited Mid-Currituck Bridge, there wasn’t much good news in the presentation from Project Manager Jennifer Harris and North Carolina Turnpike Authority Chief Engineer Rodger Rochelle at the May 4 Southern Shores Town Council meeting.

The bridge, a 4.7-mile span that will cross the Currituck Sound connecting Aydlett on the mainland with Corolla, has been in the planning stage or under discussion for over 20 years. The bridge is part of the North Carolina Turnpike Authority and will be a toll road when and if it is completed.

With a lawsuit from the SELC still unresolved, Rochelle said the start date for bridge construction has been pushed back with the actual construction phase not likely to start until late 2023.

The construction of the bridge is seen by residents of Southern Shores as a long-sought remedy to the summer seasonal traffic that can choke their streets and neighborhoods.

“My concern is that every year that goes by and this doesn’t happen, is one more year we deal with three months of really intense weekend traffic,” Southern Shores Mayor Tom Bennett told the Voice in an interview. “The meeting…was kind of what I expected,” he added, commenting on the bridge presentation to the council. “It was people who are trying to make it happen and doing the best they can. But their hands are tied because of the lawsuit.”

Rochelle began the discussion by pointing to lawsuit challenging the Record of Decision that the SELC filed on behalf of the North Carolina Wildlife Federation and “No Mid-Currituck Bridge,” a group of local citizens opposed to the bridge.

There is no court date scheduled at this time for the lawsuit, according to Kym Hunter, Senior Attorney for the SELC, although legal briefs in the matter are being filed. The SELC filed its brief on April 30. According to Hunter the state’s brief is due by the end of the month. After that there will be a wait for a court date to be scheduled.

“There could be a hearing. This judge usually takes a while to decide these cases,” Hunter said. “I would be surprised if it took her another six months after that.”

Because the bridge spans a navigable waterway, it cannot be built without Coast Guard approval. However there are number of other permits that will be needed for the project to move forward. Permitting agencies include NC Department of Water Quality, the US Corps of Engineers, US Environmental Protection Agency and the National Marine Fisheries. SELC’s Hunter said that to her knowledge, the permitting process has not yet begun.