‘That’s what makes it worthwhile’

Mike Brisson, Wright Emory and Richard Miller share a passion for sports photography and a commitment to covering local games. At high school, middle school, even some Rec League games, they can often be seen walking the sidelines, camera in hand, looking for the right moment, the point in time that tells a story.

It’s a labor of love and they are certainly not getting rich at what they are doing. In fact, it’s doubtful they are able to break even. But in talking to them it is apparent that what is important are the pictures and the kids whose stories and moments, they have captured.

Back in the recession of 2008, the company Mike Brisson was working for had to cut hours and wages and he needed to supplement his income. He saw an ad in the Coastland Times for someone to cover sports in Manteo.

It was a good fit. “I know sports, I love sports, so I can follow the ball. I know where the action is so I can find that one shot,” he says.

He shoots all the sports that Manteo plays, but he admits soccer is his favorite.

“Probably because that’s what I played when I grew up so I can follow the game,” he says. “First Flight and Manteo, particularly when they get together [and with] Manteo now on the uptick, I would say, soccer is the most fun for me to shoot.”

By 2011, his company was back to full hours and full wages — and writing and photography was too time consuming. So he gave up the writing and concentrated on photography.

Manteo continues to be where his attention is focused. Brisson has a full-time job and getting over to the beach, he notes, adds time to what is almost a volunteer occupation — especially since he stopped charging for his images as COVID restrictions swept across the area.

“I used to charge for downloads,” he explains. “But when COVID started I thought, ‘so I could cheer the kids up a bit.’ I just started giving all my downloads away.”

With 13 years of photos, he’s noticed that there is sometimes a complete story of some of the kids he’s been following.

“Focusing on pictures coincided with all my friends, kids getting of age. I just started taking pictures of them all the way through high school. A lot of those kids have graduated, and they’ve moved on. So I have a chronological sports gallery for a lot of kids around here,” he observes. 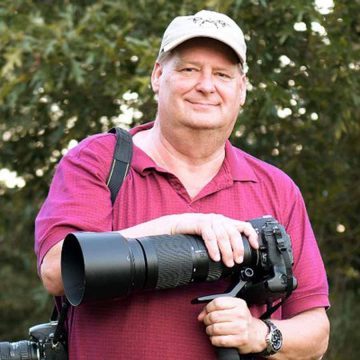 Back before there was such a thing as digital photography, Wright Emory was a freshman in high school taking pictures for the school yearbook.

“I enjoyed it,” he said. So he took all his savings and ordered a camera.

“I guess my parents would say it was secretly ordered,” he recounts. “A UPS man showed up with a delivery and my mom said, ‘We haven’t ordered anything.’’’

He got to keep the camera.

Capturing the action in sports has always fascinated him, but it is not just the action that makes an image come alive. “Filming the motion, capturing something, you know, a slice of time,” he says. “But mainly, you look for the emotion.”

He began taking pictures of local high school sports in 2005 or 2006 when he got his first digital camera and a friend’s daughter was on the First Flight High School soccer team.

“That was one of my first experiences with watching soccer in Eastern North Carolina,” he states. “It’s what got me interested and the next year is when I started going to the ballgames.”

Emory covers all sports, but football is where the most interest lies.

“Football is the king as far as the most attention,” he asserts. “You can traipse up and down the field trying to get somebody catching a pass or trying to get a good block.”

“And invariably, mom wants the one of her son standing on the sideline with the helmet,” he adds.

How important that image is to the parents is a guiding principle in how Emory looks at his photos.

“Every football run is not the Heisman,” he says. “In between that Heisman frame, it’s some legs sticking out or some arm or tongue…The last thing you want to do is make the athlete look awkward or anything like that. So you try to look at his or her best position.”

Manteo's only completed pass - a short pass in the end zone for a two-point conversion.
A hard shot by First Flight finds the top of the net for a score late in the second half of play.
Game over. Competitors no more.
Ayden O'Neal (Manteo) dives at third base trying to stop a hard grounder down the line.
Several players were seen going airborne during the game demonstrating the athleticism of both teams.
Manteo's keeper Montanta Miller tries in vain to stop the second score by the First Flight Lady Nighthawks.
Madi Norris (#16, First Flight) jumps to avoid the tag at home plate. 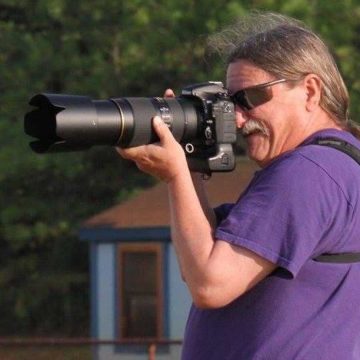 Richard Miller has been a lot of things over the years.

“Photography was never a profession” he explains. “For many years I was scientist. I went to school for a long time, got a number of degrees, worked for NASA for 21 years and then I became a professor at ECU.”

Photography, however, was always part of what he was doing. In Miami, where he grew up, he began honing his skills with film. Later, with NASA, he was introduced to digital cameras to document his work.

And for him, photography, seemed to offer a nice counterbalance to the data-driven world of science.

“I was using my analytical side of my brain,” he explains. “Photography was a way to allow me to satisfy the creative side of life.”

He is retired now, and photography is what he does. He shoots all sports. But baseball is his clear preference.

“Baseball is called the thinking man’s game because every pitch you need to know what happened, and if so, what are you going to do to anticipate it.…I will often position myself. It doesn’t always happen that way, but I get a lot of shots because I guess the situation,” he states.

In addition to his Outer Banks sports, Miller also gets off the beach, taking his camera to a number of college campuses.

Outspoken in his observations, he points out that in a digital world, the value of photos has changed.

“Prior to this generation, Facebook, whenever there was a natural disaster, people lost homes,” he states. “And they were interviewed, they would say, ‘we can rebuild. We can do all this. We can’t replace our prints.’”

Yet there are times when a picture becomes invaluable, something that was brought home to Miller recently.

“In 2019, I shot the Division Two College Baseball World Series,” he recounts. “I was contacted, maybe four months ago, and a player said, ‘Hey, did you get any with me during this [World Series] …I never knew that would be my last game.’”

“I looked and I said ‘yes,” he recalls. “That’s what makes it worthwhile. When you’re able to provide a kid or a parent, a memory that they thought was gone.”