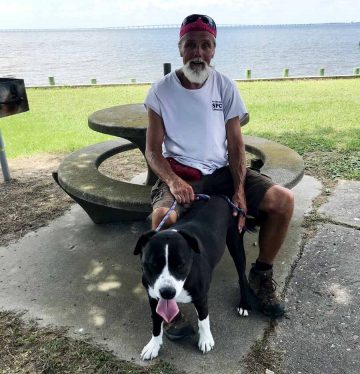 Brad Burns has always been a dog person. He’s had a connection with canines ever since he was a young child and currently has four of his own, all of which are rescue dogs. But since retiring to the Outer Banks two years ago, this 64-year-old Kill Devil Hills residents dedicates much of his time to dogs who are in need of attention, love and a little exercise. 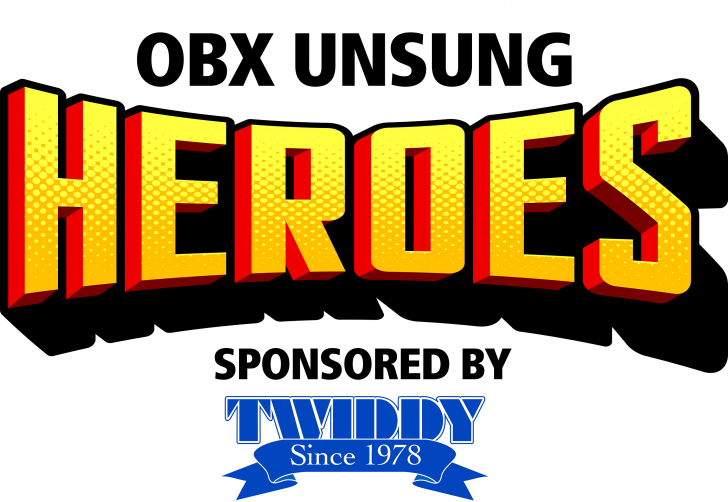 A tanned Burns – outfitted in work boots, a red bandana wrapped around his head and sunglasses – can be found at the Dare County Animal Shelter on Roanoke Island at least four days a week for about five hours each day. He spends those hours volunteering by taking the shelter dogs on a walk that lasts for about 20 minutes for each dog.

Burns often walks the dogs down to the Ole Swimming Hole and along the side of Airport Road, giving the pooches plenty of time to sniff, do their business and stretch their legs along the route.

Sometimes, he’ll just sit with them under the shade of the pavilion nearby. “I try to get all of them,” Burns says of the dogs he walks each day. “Right now, it seems like I do for the most part about fifteen dogs on average.”

On a recent sunny June morning, Burns was walking Skittles, a mixed breed who came all the way from Georgia last summer as a neglected and abused case. On this day, Skittles was all smiles with his tail wagging as he trotted down to the swimming hole with Burns.  “These dogs,” Burns noted, “They need to be the only dog in the home and that’s kind of why they are here so long. But it’s great to work with them.”

Burns, who retired from the Northern Virginia area where he was a commercial electrician, said he always wanted to volunteer in his retirement. And when he heard the shelter could use dog walkers, he said, “Okay, I can do that. And I’ve been doing it ever since.”

“He is literally a rock star,” said Trisha Forsythe, kennel manager for the Dare County Animal Shelter. Forsythe said that Burns came to the shelter right before the pandemic hit and has been a huge help ever since.

“We know the days he comes and if he can’t make one day during the week, he will text us and come in on the weekend. He walks every single dog, regardless,” she said.

The only times Burns may not take the shelter dogs for a walk, he said, is if it is lightning and thundering or really downpouring.  “A lot of the dogs have heartworm [or other issues] and can’t walk as long…and the hotter it gets, the less these guys want to walk,” he adds.

If it’s too hot, or a dog isn’t quite ready to walk with Burns, Forsythe said he will just sit with them. Burns, Forsythe added, has a way about him that puts dogs at ease. “He is super patient,” she told the Voice. “Dogs that usually don’t like men, love this man. He absolutely has a vibe that nothing fazes him. He’s been a godsend to us and [the dogs]. He’s absolutely committed in capital letters.”

Take three-year-old Wilbur, an American bulldog mix, for example. “Wilbur, he’s been here almost a year,” explained Burns. “I couldn’t really get too close to him [at the beginning], he was a little wound up when he first got in here. Now I take him out and we’ll go sit at the pavilion down there, and he’ll just be all over me.”

Burns has similar stories for the other shelter dogs, like five-year-old Warren, a mixed breed who came to the shelter after a gunshot wound that resulted in him losing a leg. “He was also pretty wound up when he got here,” Burns explained “But now he is just a lovebug.”

Burns seems to know the stories of each of the dogs at the shelter, like two-year-old Ruby, a skittish hound who is at the shelter with her brother, Tarantino. The siblings and their parents were surrendered by a North Carolina hunter who no longer wanted them. Their parents have since been adopted, but the sibling duo is still waiting for the right owner to adopt them.

In the meantime, Burns and the shelter staff are working to make the Ruby more comfortable in her new surroundings.

Not only is the staff grateful for Burns, the dogs don’t hide their appreciation, either. When Burns comes in the kennel area, all eyes are on him since the dogs know he will take them for a nice, long walk. “They get excited,” acknowledges Burns. “That’s kind of cool to come in and they are all looking at me.”

While Burns admits that he does miss the dogs once they are adopted, he adds that seeing them get adopted is one of the rewards of doing what he does. Many times, staff will text him if he’s not there to let him know one of his canine buddies is going home with a new owner.

Asked about a favorite shelter inhabitant, Burns responds simply: “They are all my favorites.”