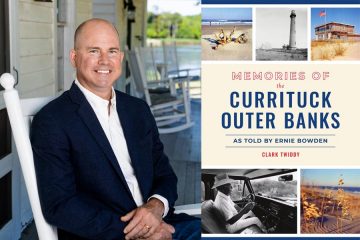 Part of Twiddy’s goal was to memorialize Currituck Outer Banks history before the stories disappeared.

For Clark Twiddy, a love of history runs through his veins and keeping the past alive has been something of a calling for this native of the Outer Banks. Twiddy and his family have long been committed to and recognized for their efforts to preserve historic buildings in Corolla and other surrounding areas. Now, he has found another way to ensure that the Currituck Outer Banks’ past will not be forgotten.

Twiddy, president of Twiddy & Company, has spent the past year or so putting pen to paper to ensure that the stories of sixth-generation Outer Banker Ernie Bowden live on in his newly released book, Memories of the Currituck Outer Banks: As Told by Ernie Bowden. The book is being published by The History Press.

Relying on Bowden’s oral history, while adding context of his own, Twiddy eloquently depicts the past and present of this sandy windswept stretch of shoreline. The result is a compelling story accompanied by photos that offer a window into the Currituck Outer Banks’s past.

“The Bowden family is one of those rooted ocean tribes,” Twiddy writes in his book’s introduction. “The Currituck Outer Banks are their ancestral lands, and the salted firmament of this still-remote place retains their imprints long after the ceaseless wind has swept aside their sugar-sand footprints.”

“In sharing his oral memories,” Twiddy continues, “Mr. Ernie Bowden, at more than ninety years young, casts his remarkable memory from the storm-tossed isolation before the Wright Brothers to the very edge of the booming tourism industry of the twenty-first century.”

In 2010, Bowden made audio recordings of his memories, from which Twiddy has framed in his new book. Bowden, described as a “local legend,” was born in Corolla in 1925 and according to Twiddy, is a man of many trades, having been a sailor, engineer, builder, farmer, horse trader and livestock baron. In addition, he was a long-serving Currituck County Commissioner.

Bowden was also someone unafraid to stand up to the authorities. A Facebook post celebrating his 95th birthday in 2020, recounted how he disregarded Virginia’s efforts to block North Carolinians from entering the state, and by his own admission, “I was thrown in jail twice, for a total of 58 days.” In the 1990’s, the man also known as “the cowboy commissioner” (at least in Virginian-Pilot stories) challenged the federal government’s efforts to force his cattle off U.S. Fish & Wildlife Service property.

Twiddy, who calls Bowden, “a remarkable Outer Banks original,” added: “I think his decisions to stand up to the federal government and willingly go to prison for his beliefs would be unheard of in our day and time. I think it’s important to note that he went to federal prison, as an elected official, because he believed his actions supported public access to public lands.”

In the book, Twiddy retells Bowden’s stories and paints a picture of days past on the Currituck Outer Banks — from tales of the Seagull Community, the first Currituck Inlet, and life on the island during the Great Depression and the Ash Wednesday Storm to stories of being a minesweeper sailor and ocean salvager,

“All of us here on the Outer Banks are probably seeing the Outer Banks change, and there’s a lot of good that comes with that change. “But there’s also some things that make us a little wistful,” Twiddy told the Voice during an interview, explaining his inspiration for writing the book. “I’m one of those folks that says, ‘The more that we change, the more we have…a responsibility to contextualize what we have become in terms of where we started and how we have got to where we are today.’”

The book is also Twiddy’s effort to turn oral history into written history. “There is a generation of folks on the Outer Banks who are in the [twilight] of their lives, and maybe they’ve already passed. And to me, it was really important…that their stories do not go with them,” he said.

Twiddy relied heavily on the recordings of memories Bowden shared in 2010, in part because Bowden has had some health problems over the last year. He likens Bowden’s stories to the those found going back in time in places like Appalachia and the Mississippi Delta.

“Those recordings kind of sat on a proverbial shelf, I just started to think that maybe now is the time just to begin to highlight some of these stories,” Twiddy explained. “And Ernie’s is a remarkable story.” This book is clearly a tribute to that remarkable life.

“I hope that his family is pleased with the book, I think they will be,” Twiddy offered. “And he still lives nearby, so I am hoping over the next week or two to be able to go up and visit with him and hand him a copy of his book and say, ‘Hey, your story will live on.”