How an unpaid meal led to free meals for police, military, first responders 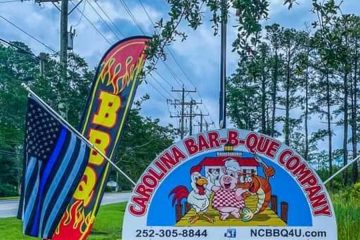 On Friday July 16, as Carolina Bar-B-Que Company owner Mike Weaver recalls, someone placed a good-sized call-in order from his place. But when the customer pulled up to the Manteo restaurant and saw the thin blue line flag in support of police that has flown outside the business for about two years, they called to say they did not want their already-prepared food.

Weaver, who told the Voice that the flag is designed to “memorialize police officers who have died,” posted about the incident on the company’s Facebook page, noting that a result, he would have to institute a new policy of asking for upfront payment on takeout orders from customers he doesn’t know.

The July 16 Facebook post also announced that he was starting a “Feed the Blue Free Fundraiser page” on gofundme.

Weaver’s family tree is filled with relatives and ancestors who worked in law enforcement. “I like to be apolitical, basically,” he said. But support for police and first responders “is a driving force that’s always been inside my heart.”

Meanwhile, word of the unpaid meal and his initiative to provide free food to police and emergency personnel, spread. “Basically, it clicked and went viral,” Weaver said. People started writing checks. One man gave several thousand dollars. Weaver got a call from a police officer in California, he said, as well as one from North Carolina Third District Congressman Greg Murphy.

As of Tuesday July 10, he noted, that he had collected in total about $8,000 for his “Feed the Blue Free Fundraiser.” The money, he explained, has been put into an account that will be used to provide free Carolina Bar-B-Que meals for police, military, correction officers, paramedics and other first responders, along with the 10% discount for their families.

As for how he knows the free meals are going to the right people, the restaurant posted this advice on Facebook: “Please make sure to let us know that you are Police, Fire, EMS, and Military so that we can make sure you are fed and taken care of.”