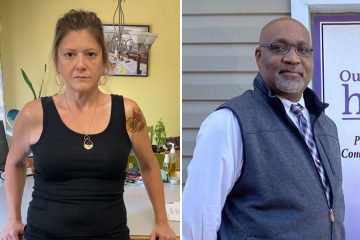 In a July 16 press release, officials at the Outer Banks Hotline announced the retirement of Executive Director Michael Lewis, who had been with the non-profit for more than 21 years and had served as its Executive Director since 2015.

Without providing any further details on Lewis’ departure, the Hotline, which was founded in 1980, also announced that it is beginning a search for a new executive director. The organization is a private non-profit that provides crisis intervention, safe house, advocacy and education services, often for women in abusive situations. Its financial supporters include the NC Department of Administration’s Council for Women & Youth Involvement and the NC Department of Public Safety.

But the Voice has learned that the announcement of Lewis’ departure comes in the wake of allegations about his workplace behavior that led former Hotline Safe House Manager Katy Haslar to file a June 8 formal complaint against Lewis that included allegations of sexual harassment. The complaint was sent to the Hotline Board of Directors, which is chaired by Judy Burnette, as well as the North Carolina Council for Women and Youth Involvement.

Those allegations also triggered an investigation into Lewis’s alleged behavior by a committee comprised of several board members, although the announcement of Lewis’ departure makes no mention of the board investigation.

Haslar, who moved to the Outer Banks three years ago from Indianapolis Indiana with her husband and son, had worked for that city’s Julian Center, which supported victims of domestic violence and sexual assault. Haslar, who was first hired at the Hotline in June 2020 and became safe house manager in February of this year, resigned — with her last day of work on June 7, several weeks after she announced her intention to leave.

When reached by the Voice on July 16, Michael Lewis referred inquiries to his attorney, Jeff Malarney. On July 19, Malarney confirmed to the Voice that he is representing Lewis, adding that, “At this juncture, I’m not in a position to comment” on the allegations against him.

In interviews with the Voice, Haslar said she was prepared to resign, get out of an uncomfortable situation, and go on with her life. It wasn’t, she said, until she heard the similar stories of other women that she decided to take her story public.

In reporting this story, the Voice interviewed and learned of other women who alleged inappropriate behavior by Lewis, including another formal complaint filed with Hotline Board about nine years ago.

In the complaint filed by Haslar, she wrote that “I had hoped to conclude my last few weeks without issue so that I could leave the safe house status in good condition for the next manager and administrative staff, but as more information came to my attention from community members and former staff members, I found that was not able to happen.”

Haslar’s complaint raised questions about key aspects of Lewis’ overall management style and handling of staff, including making disparaging remarks about a number of employees

She also alleges in that complaint that “I was also the victim of sexual harassment by Michael Lewis,” detailing numerous examples of behavior that included Lewis’ comments about her appearance — including that she looked “beautiful,” that expressed a desire to play “strip poker” with her, and that voiced his desire to “hold you and stroke your hair.”

“Twice, I clearly stated in texts that I was devoted to my family and my husband and would never do anything to jeopardize my marriage,” she continued.

As Haslar stated in both the complaint and interviews with the Voice, Lewis initially was extremely complimentary of her work to the point of telling her: “You’re an incredible leader. I’m going to turn this whole place over to you.” She also said that he told her “his plan was to eventually have me in the Associate Director position alongside of him.”

In the formal complaint, Haslar acknowledged that it took her a while to understand what was happening, noting that it was only in the past several weeks that she understood that the “his compliments of me, promises, and aspirations expressed for me came…only from a place, in my opinion, of hoping to initiate a sexual relationship with me.”

Prior to making her complaint, Haslar said she discussed her sexual harassment concerns with several superiors and other co-workers at the Hotline. After filing the complaint, she said that about a week later, she was informed by a board member that there would be no investigation due to a lack of evidence.

On June 6, Haslar contacted Jane Allen Wilson, Director of Training at the non-profit North Carolina Victim Assistance Network, to get advice. In an interview with the Voice, Wilson confirmed that she provided information to Haslar, adding that “It sounded like a very concerning situation and there is a standard response to the protocol…file a grievance with the board [of the Hotline] and hope the board really hears the complaint.”

Wilson added that she has worked with Haslar on several cases and stated that “she’s a really wonderful advocate…She did not want to leave her job.”

Haslar also said she contacted Philisa Fowler of the North Carolina Council for Women & Youth Involvement, which is a Hotline funder. In email exchanges between Fowler and Haslar that occurred from June 9-16, Fowler advised her to voice her concerns to all Hotline board members, noting that the board should have a committee in place to address her complaint.

“I will make the board aware that we as a funder have received the complaint and are aware,” Fowler stated in one email.

In late June, Hasler said that Hotline Board Member Teuta Towler called to inform her that she was leading a committee to investigate Haslar’s complaint and also invited Haslar to a June 22 meeting with Towler and two other committee members.

Haslar said that after that meeting, which she characterizes as not having gone well, she next heard from the board when she got a call from her lawyer, Brad Hill, on or around July 10. She said Hill told her, based on a message from Hotline attorney John Leidy, that the board was looking to wrap up the case quickly. On July 13, she said that Hill relayed another message from Leidy, indicating the board had decided to continue the investigation.

The first time the Voice directly approached a Hotline Board member to discuss what its reporting had found was on July 12.

On Friday, July 16, the Hotline announced the retirement of Michael Lewis.

When asked for an interview or a comment on the allegations against Lewis and the circumstances surrounding his departure, Towler issued this statement.

“Regardless of the transition in the leadership team, Outer Banks Hotline is committed to providing services to the victims of domestic violence and sexual assault. My goal is to make sure that Hotline doors stay open. The safe house is fully staffed by wonderful female advocates who are very passionate about helping survivors of domestic violence and sexual assault.”

“Women who are experiencing any domestic violence or sexual assault need to know that they have a safe space to go and start a healing journey,” the statement continued. “I thank all the volunteers and our donors for helping us keep the doors open and serve women in need of Hotline services.”