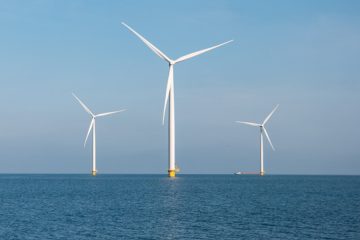 It would still be several years before construction could begin on a Kitty Hawk Wind Farm. (Kitty Hawk Offshore/Avangrid Renewable)

The prospects for building the largest East Coast wind farm in the waters off Kitty Hawk took a step forward last week with the July 29 announcement by the Bureau of Ocean Energy Management (BOEM) that it will conduct an environmental review of the project.

Even with this formal step, however, it will be several years before construction on the project can begin.

Avangrid, the lease holder for the Kitty Hawk Wind Energy Area (WEA), said that when completed, the project will produce enough “clean energy” to power 700,000 homes.

Back in 2017, Avangrid won the rights to lease more than 122,000 acres in the Atlantic off Kitty Hawk with a bid of just over $9 million. The company already operates the Amazon Wind Farm in Pasquotank and Perquimans counties.

BOEM’s official Announcement of Intent to prepare an Environmental Impact Statement (EIS) falls within the original schedule for full development of the offshore WEA. There is a 30-day public comment period that begins August 1.  Because of COVID restrictions there are no in-person meetings scheduled.

Public input is an important part of an EIS and is always included in the final approved document. Typically a Draft EIS is issued, one that will undergo revisions before a final EIS is approved. The BOEM timeline calls for the impact statement to be completed by August 2023.

After approval of an EIS there are very few steps left before construction can begin by late 2023 or early 2024.

Although the Kitty Hawk WEA is, at this point in time, the largest potential East Coast WEA, other areas in federal waters are being considered, including the waters off Massachusetts and New York. The additional areas under consideration are consistent with an initiative announced in March of this year to develop 19 Gigawatts of offshore wind energy by the year 2030.

In addition to the federal action, North Carolina, Virginia and Maryland have signed a Memo of Understanding to create the Southeast and Mid-Atlantic Regional Transformative Partnership for Offshore Wind Energy Resources (SMART-POWER), hoping to facilitate cooperation among the states as they develop their offshore energy resources.

“We believe it will play a key role to help establish North Carolina, Virginia and Maryland as a hub for the offshore wind industry,” he said.

To find out how to register for those meetings, click on Kitty Hawk Scoping Virtual Meetings | Bureau of Ocean Energy Management (boem.gov)