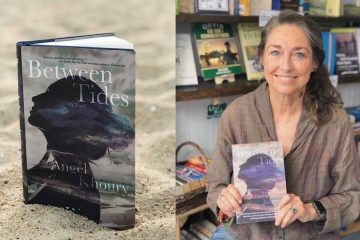 There is no book more highly anticipated this summer than long-time Outer Banks resident Angel Khoury’s debut novel, Between Tides. Praised by Publisher’s Weekly- ‘a mesmerizing account’-  and NYT best-selling authors Lee Smith- ‘brilliant, ambitious and enthralling.. a totally original work of art’ and Ron Rash, Between Tides is a significant work of historical fiction set in a dual time format that toggles between the turn of the century and the 1940’s, from Cape Cod to the Outer Banks. Fans of Where the Crawdads Sing will throng to pick up Between Tides, as Khoury is an impressive writer of nature descriptive and captures the essence of the coast as it once was so completely that the reader becomes immersed in another time. ‘From a coastal landscape known for hidden treasures, Angel Khoury has emerged and given us a wonderful novel’- Ron Rash.

Angel is a native of Suffolk VA, a UVA graduate, former associate editor of The Coastland Times, editor and publisher of the Outer Banks Magazine and a resident of the Outer Banks for over forty years. This is a book that will make waves in the literary world and so it is with great pleasure that Downtown Books announces that on its publication date, Tuesday August 10, signed copies of Between Tides will be available at 10am. In addition, we will welcome Angel for a Friday book signing on August 13th from 2pm – 4pm. For more information visit duckscottage.com or call 252-473-1056. This is a summer must read- a book you will never forget by an author whose name will soon be known far and wide. Downtown Books is a very independent bookstore serving the entire Outer Banks and is located at 103 Sir Walter Raleigh Street in Manteo.