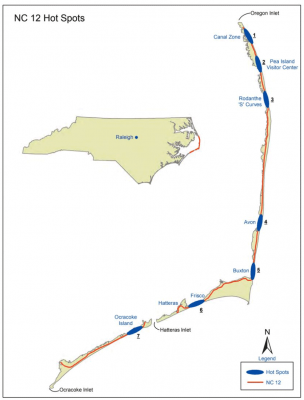 At the third meeting of the NC 12 Task Force, held on Aug. 11 at the Dare County Administrative Building, the complexity of maintaining NC12 on Hatteras Island was the focus of attention.

As stakeholders discussed confronting the challenges of the road now and in the future, two concerns in particular emerged: the cost of a bridge over the seven “hotspots” that have been identified as well as environmental concerns. There was consensus, though, that the S-Curves, which are listed as a hotspot, will be resolved when the Jug Handle Bridge opens next year.

Nonetheless, the rate of erosion in the six remaining areas highlighted the urgency of tackling the issue. Dr. Reide Corbett, Dean of the ECU Coastal Studies Institute Campus, briefed the Task Force on the how quickly the shoreline is retreating in the remaining hotspots.

The greatest retreat, he noted, was located at the Pea Island Visitors Center— 4.8 meters/year — and in Avon at 4.9 meters/year. The least was in Buxton where Dare County funded a beach nourishment project. The county will be nourishing the beach in Avon as well.

The Wednesday meeting focused on the first of the hotspots, the Canal Zone just south of the Basnight Bridge. Although the rate of erosion in the Canal Zone is not as high as other areas (2.5 meters/year by the year 2030), NC12 in that area would be threatened.

With the discussion focusing on short-term and long-term solutions, the cost of building a bridge in Pamlico Sound emerged. To provide some basis for computing that, Win Bridgers, NCDOT Deputy Division Engineer, provided figures for the Jug Handle Bridge project.

“The bridge at Rodanthe is 2.46 miles long, $154 million,” he said. Using that figure, he extrapolated the cost of a bridge in the sound. “Just so you know, if you say, ‘Oh let’s build a bridge like Rodanthe,’ it’s $74 million per mile. That gives you some idea of magnitude.”

Bridgers was asked about the cost of a bridge-in-place, a bridge using the existing right of way and not going into the sound.  “Obviously it would be less,” he said, noting the Richard Etheridge Bridge’s estimated $20 million per mile price tag.

It became apparent during the discussion, however, that a bridge-in-place would not address the long-term issues confronting NC12. Although the upfront costs of a series of bridges-in-place would be considerably less than a longer bridge in the sound, there would be a series of ongoing construction projects needed to keep the road open.

Corbett also pointed out that if a bridge-in-place was built, shoreline retreat was happening on the soundside as well as along the ocean shore — raising the possibility that losing the roadbed or damaging the bridge exists from the ocean and the waters of the sound.

And there was consensus that the idea of a 17.2-mile bridge bypassing Pea Island and connecting the Basnight Bridge and Rodanthe with a $1 billion price tag was an impractical solution, even though it was possible that over time, the same amount of money would be used for a series of shorter interconnecting bridges.

There was also discussion about permitting a bridge constructed in Pamlico Sound, but concerns were raised about how to minimize the impact of the bridge and construction on subaquatic vegetation (SAV), one of the primary food sources for migratory waterfowl.

And the subject of beach nourishment as a means to preserve the roadway also arose. As a temporary measure to give a permanent solution time to be constructed, the National Park Service has permitted beach nourishment in the past.