WHAT TO WATCH ON TV
Stream On: Law enforcement’s poet laureate, Joseph Wambaugh 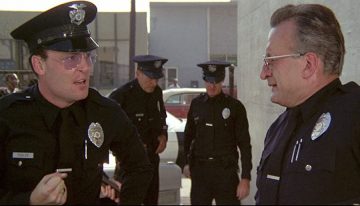 Los Angeles Detective Sergeant Joseph Wambaugh’s perspective on police work led to his first novel, The New Centurions, which was published early in 1971 to critical acclaim and popular success. He later quipped that suspects would ask for his autograph.

Soon turning to writing full time, Wambaugh was prolific and popular starting in the 1970s. He mixed novels (The Blue Knight, The Choirboys, The Black Marble) with nonfiction accounts of crime and detection: The Onion Field.[^]

Here are screen adaptations of his first works.

“Three rookie cops, Roy Fehler (Stacy Keach, Mike Hammer TV films), Gus Plebesly (Scott Wilson), and Sergio Duran (Erik Estrada, CHiPs), report for duty with the Los Angeles police department. Roy is married with a daughter and intends to eventually become a law student. Gus is a father of three. Serge is a native of East L.A., who never expected to end up patrolling its streets.

“Each is assigned a veteran partner. Roy’s is the greatly experienced Andy Kilvinski (George C. Scott, Patton), who has been on the force for nearly a quarter-century and has his own unique style of law enforcement. For example, he will drive a group of hookers, who he has supplied with liquor, around the city for hours, in a paddy wagon, simply to keep them off the streets for a night.”[^]

Sterling Silliphant (Naked City/Route 66) wrote the sceenplay from Wambugh’s first novel. Like other movies from the early ’70’s, this uneven but influential movie could have been made for TV, except that it was filmed in Super Panavision. On the plus sign its lack of flash allows it to focus on the story, and like all of Wambaugh’s work, it’s a compelling story. (The sound design is a little cheesy.) It opens with a quick montage of police officers training in an academy, and then takes us to a squad room in Los Angeles, which I’m sure was the model for the later TV series Hill Street Blues (1981). Here we meet the protagonists of the story and begin to learn a little bit about each from their interactions with the desk sergeant.

The wisecracks fly as they prepare to hit the streets. Rookie Fehler, who demonstrates an acute social conscience, teamed up with the cynical Kilvinski, hears the first of “Kilvinski’s laws”: “Be civil to everyone, couteous to nobody.” Director Brian DePalma (The Untouchables, 1987) must have been listening when Kilvinski added: “Rule two: If the dude uses his fist, you use your stick. If he uses a knife, you use a gun. Cancel the ticket right then and there.”  The users of IMDb.com have given The New Centurions a score of 7/10. 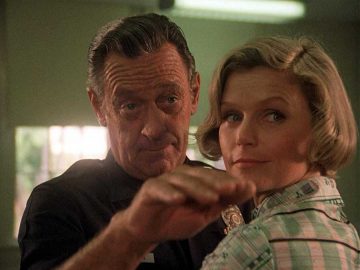 William Holden and Lee Remich in ‘The Blue Knight.’ (IMDb.com)

This TV miniseries, on the other hand, could have been made for the cinema, if not for its 4:3 aspect ratio. The production design, direction and camera work are all top-shelf, presaging the excellent TV dramas available today. William Holden (The Wild Bunch) thought enough of it to star (his first time on TV), along with movie stars Lee Remick (Days of Wine and Roses) and Anne Archer (Fatal Attraction).

“Bumper Morgan (Holden) is a 20-year veteran of the Los Angeles Police Department who is scheduled to retire in a week. Before he leaves, he must work on the murder of a prostitute in one of LA’s far corners. Along the way, he must grapple with vicious thugs, his fellow officers who have mixed feelings about his retirement, and his woman (Remick) who wants him to leave the streets. ”[^]

In the book, Wambaugh continued his theme of the love/hate relationship of police and the society they are paid to protect, along with the fragility of life, and order, and especially the danger of domestic disturbance calls, all handled with a weary and ironic humor. This four-episode miniseries fleshes out the memorable characters very nicely; Morgan is an old-timer who prefers walking a beat to handling radio calls, as a community member as opposed to an occupying army. Between his college professor girlfriend and the brass, he is talked into retiring, but first, he has this one case to wrap up.

“It was broadcast on four consecutive evenings and received positive reviews. Jay Sharbutt of the Associated Press praised the miniseries’ realism and wrote that readers ‘ought to catch this show.’ Rick Du Brow of United Press International wrote that the miniseries’ length allows it to unfold slowly and create a ‘cohesive dramatic atmosphere,’ unlike typical TV films of the day. 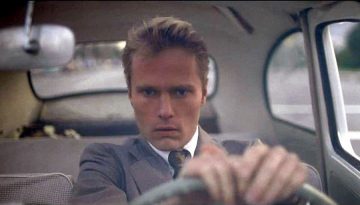 John Savage in ‘The Onion Field.’

In 1973 Wambaugh turned his attention to nonfiction with The Onion Field, a true-crime book that had few precedents save Truman Capote’s In Cold Blood. The Onion Field described the notorious murder of LAPD officer Ian Campbell by charismatic criminal Gregory Powell in 1963. The book became a best-seller, and in 1979 this faithful film adaptation starring John Savage (The Deer Hunter), James Woods (Holocaust), and Ted Danson, in his movie debut, was produced.

“In 1963, LAPD detectives Karl Hettinger (Savage) and Ian Campbell (Danson) are kidnapped by criminals Greg Powell (Woods) and Jimmy “Youngblood” Smith (Franklyn Seales, Silver Spoons). They are driven to an onion field near Bakersfield, where Campbell is shot and killed before Hettinger narrowly escapes as a cloud passes in front of the moon, plunging the onion field into darkness.

“Hettinger’s eyewitness account leads to the arrest of the two men, who are tried and convicted of first-degree murder. While they languish on death row, Powell and Smith learn how to exploit the legal system and after a series of appeals their sentences are reduced to life imprisonment following a court decision abolishing executions in California.

“Meanwhile, Hettinger’s physical condition and emotional state slowly deteriorate as his failure to act more aggressively on the night of the incident is questioned by those in authority and his fellow officers. Wracked with guilt and remorse, he experiences nightmares, impotence, weight loss, kleptomania, and thoughts of suicide.”[^]

The Onion Field was a hit, and today carries an 85% “fresh” score on Rotten Tomatoes.

Next time, lest we forget the Great Man, a W.C. Fields primer.