‘Sustainable tourism’ — for visitors and locals 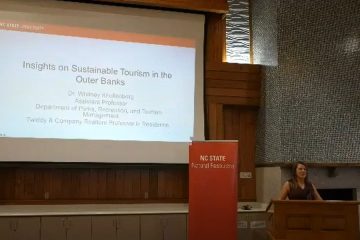 During a presentation to an audience gathered at Jennette’s Pier in late July, Whitney Knollenberg, assistant professor in the Department of Parks, Recreation and Tourism Management at NC State, addressed an issue she hopes becomes a commonplace term here – “sustainable tourism.”

Knollenberg’s current work on the Outer Banks is, in fact, being funded by the new Lighthouse Fund for Sustainable Tourism, the outgrowth of a partnership between NC State and Twiddy & Company President Clark Twiddy, who is footing the bill.

The idea is to bring a fresh perspective to the issues involved in sustaining the Outer Banks’ tourism economy while improving the quality of life for those who live and work here. Or as Knollenberg put it: “It’s got to be a great place to visit and a great place to live. You have to have both pieces.”

Over time, Twiddy hopes the initiative will take root and grow. “I would love to see an Office of Sustainable Tourism on the Outer Banks that is constantly exploring the best practices around the world for sustainable tourism and teaching us…on the Outer Banks, how to do this in the best possible way,” he said.

It’s no secret that Dare County is in the midst of an explosion of visitors. As an example, a comparison of available year-to-date numbers from the Dare County Tourism Board for 2021 and 2019 (pre-pandemic) shows that occupancy revenue is up 68%, and food and beverage increased by 25% so far this year.

“We spent thirty years as a community trying not to be Myrtle Beach [or] Virginia Beach, and we did a great job with that,” Twiddy says, quoting a friend’s observation. “But frankly we just didn’t anticipate how popular we would become.”

That popularity has put real strains on the system that sustains tourism.

“We started to see negative impacts. We started to see that there were going to get shortages in our workforce, in our supply chain,” Knollenberg said at her presentation. She pointed to restaurants that have had to reduce hours in peak season and cautioned that if tourists have to wait for service and “they’re not having a great experience…they could tell a lot of other people that they didn’t have a great time on the Outer Banks.”

In her interview with the Voice, Knollenberg elaborated on the inextricable link between attracting and servicing visitors and sustaining the locals who make that happen. “It is the people who are at the heart of this [tourism] industry, who keep it running,” she said. “Those people are crucial to the industry being sustained.”

She cited the importance of creating sufficient affordable or workforce housing — terms that are frequently used here — as the key to a sustainable tourism economy. And she pointed out that the issues confronting the area are different than most tourist-driven economies.

“The Outer Banks is unique in many ways because of the geography,” she said in the Voice interview. “We’ve got to think about what makes sense in terms of places that we could build that will be safe to be long term. Things like the issues with being able to build to code for hurricane compliance.”

She also pointed to the jurisdictional structure of the Outer Banks as an issue that has to be acknowledged to address the affordable housing crisis.

“Something that really makes the Outer Banks unique is that we have three separate decision-making bodies [in Currituck Dare and Hyde Counties], plus the incorporated areas within Dare County,” she said. “There’s lots of people having to think about this and make decisions for their constituents and their residents.”

For his part, Twiddy noted that tackling these issues will probably require a regional approach. Increasingly the Outer Banks workforce, he points out, does not live on the Outer Banks, and the best way to address the issue may be to work with the communities where the workers already live.

“The Outer Banks workforce, more and more, is orienting to Elizabeth City, to Columbia. That’s where the affordable housing is and I would love the idea that maybe we could have a regional planning board that has housing as a focus,” he said.

At her July 28 presentation at Jennette’s Pier, Knollenberg also called for a shift in how we think about tourism and used another relatively new term around here – “destination management.”

“A way to think about this, the paradigm that could be helpful, and changing our approach to tourism is called destination management…It’s been adopted by many other communities across the United States and across the world,” she said. “It focuses on balancing all those wonderful opportunities, growth of visitation, environmental responsibility and quality of life, while still ensuring that residents and those who deal with those negative impacts of tourism every day, are engaged and participate in development and benefit from tourism.”