WHAT TO WATCH ON TV
Stream On: Railroad thrillers ‘The Taking of Pelham One Two Three’ and ‘Unstoppable’

‘Mr. Brown’ menaces passengers on a hijacked subway train in ‘The Taking of Pelham One Two Three.’ (United Artists)

From the time that North America’s first transcontinental railroad connected the existing eastern U.S. rail network at Council Bluffs, Iowa, with the Pacific coast at the Oakland Long Wharf on San Francisco, the railroad became the backbone and a central narrative of our huge continent.

Indeed, one of the first movies, 1903’s The Great Train Robbery, was a major success for producers The Edison Company. Nowadays many films feature scenes filmed on trains; here are two that are explicitly about them.

THE TAKING OF PELHAM ONE TWO THREE

This great thriller was released during the “golden age of skyjacking”; also a time when the subways of New York City were considered by the general public to be dangerous, as depicted in the film Deathwish. Adapted from a 1973 novel, it depicts the highjacking of a New York City subway train by a gang led by “Mr. Blue” (Robert Shaw, Jaws), a cool character who had been a mercenary in Africa. He demands one million dollars in one hour or else he will kill one passenger for every minute it’s late.

The unique character of New York City is highlighted, too: Mr. Blue must deal with sardonic NYC Transit police lieutnant Zach Gardner (Walter Matthau), interrupted while showing a delegation from the Tokyo transit system around. He tells them that among the disturbances they must deal with is “mishegaas” (Yiddish for “craziness”). At his side is laconic Lt. Rico Patrone (Jerry Stiller, Seinfeld), who tells the Japanese tourists, “We had a bomb scare in the Bronx yesterday. But it turned out to be a cantaloupe.” Gardner and Patrone represent “Mayor Al” (Lee Roberts, Klute), sick with the flu, who must be dragged from his bed in Gracie Mansion by the Deputy Mayor (Tony Roberts, Annie Hall), and who only makes concessions when reminded that he is saving the lives of voters.

The assembling of the four-man gang builds tension before we know what will happen: each is innocuously sinister in glasses and fake mustache, and gets on Pelham 123 at a different stop. (The trains are named for their point of origin and time they left—in this case, Pelham, NY, at 1:23. For years after the film came out it became official policy to not run trains from Pelham at 1:23; the policy was eventually rescinded but the NYTA still won’t do it.)

The other gang members are “Mr. Green” (Martin Balsam), an ex-motorman busted for drugs, “Mr. Grey” Héctor Elizondo), recently ousted from the mafia for being too violent, and “Mr. Brown (Earl Hindman, “Mr. Wilson” in Home Improvement).”

It’s an old-school New York thriller along the lines of Sidney Lumet’s The Anderson Tapes. It has a Tomatometer score of 100%. It was remade, well but unnecessarily, in 2009, with Denzel Washington (see below) and John Travolta. 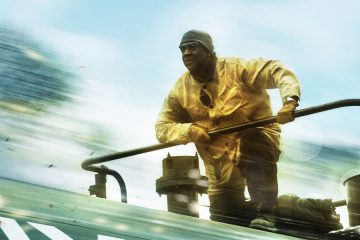 Engineer Frank Barnes climbs aboard runaway freight train #777 in an attempt to stop it before it crashes in Stanton, Pennsylvania. (20th Century Fox)

Director Tony Scott, the younger brother of Ridley Scott, had a checkered career in film. Some of his efforts were distinctly cartoonish although quite watchable (True Lies, Beverly Hills Cop II, Top Gun), but occasionally, especially working with Denzel Washington, he approached excellence: the 2009 remake Taking of Pelham 123, the 2004 remake of Man on Fire, and Unstoppable, Scott’s swan song.

Unstoppable is based on the true-life CSX 8888 incident of 2001, when a freight train laden with hazardous chemicals ran unpiloted through Ohio for two hours at dangerous speeds.[^] The film opens on Will Colson (Chris Pine, the Star Trek movie) awaking in his brother’s blue-collar house in Pennsylvania. A motorcycle is out front with a “For Sale” sign on it, and on his way to his first day of work as a train conductor, he phones his wife, who declines the call.

He reports to Frank Barnes (Denzel Washington, Fallen), an old hand, for his first day of training.

Meanwhile a group of grade-school students boards a train for “railroad safety day,” and in the yard, Dewey (Ethan Suplee, Chance) prepares to clear the track for the kids’ train by moving a half-mile-long freight train, which, we later learn, includes cars carrying molten phenol, a toxic ingredient used in glues and paint.

A colleague notices the air-brake hoses are unconnected and Dewey says he’ll hook them up out of the yard. “The tower’s bitchin’” to clear the track. As the train starts to move at a walking pace, Dewey sees a switch ahead is mis-set, so he sets the dynamic brake and hops from the cab to run ahead and switch it. But in this locomotive the throttle and brake is operated by the same lever in different positions; Dewey had chosen the wrong one, and the train takes off.

As the train picks up speed, Dewey is unable to catch it and jump back on, and it heads towards the children’s train.

Meanwhile, Will is distracted by an upcoming domestic hearing and Frank by his daughter, whose birthday he forgot, but it finally falls to them to somehow stop Dewey’s train before it hits a slow-speed elevated curve above a heavily populated neighborhood near its destination in 66 miles. The many technical problems are shown in an understandable way (for instance we learn of the “dead-man’s brakes,” a wand that the engineer must hit periodically before the air brakes slow the train down—remember, Dewey’s air brakes are unconnected), intercut with the human stories of the heroes who dealt with them.

This is truly an edge-of-your seat thriller, during which you might need to remind yourself to breathe occasionally. Quentin Tarantino called Unstoppable one of the ten best films of the decade, and Christopher Nolan cited it as an influence, citing its use of suspense.

Next time, more superior remakes 3:10 to Yuma and Ransom.