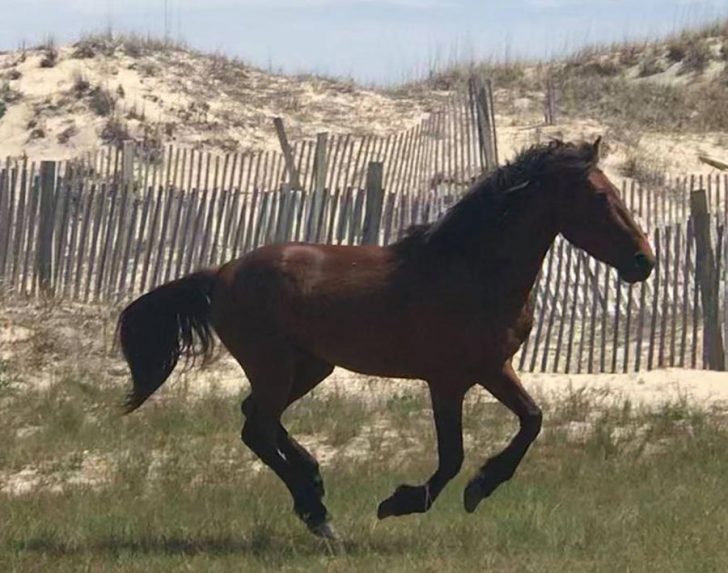 The wild herd suffered a tragic and preventable loss yesterday when Hurricane, a 10-year-old stallion, died of heat stroke after being tangled and stuck in wire.

Around 10 a.m., CWHF received a call from a Dominion Power worker that he had discovered a wild horse on the ground, tangled in wire. (It was not a power line – it was wire that had been put up as fencing.) Our staff arrived on-scene almost immediately and we were able to free Hurricane from the wire. He stood up and after a minute or two walked off and was relatively sound. The wound on his leg didn’t look too bad and we were relieved that it seemed like Hurricane had avoided any serious damage from the incident.

We continued to track Hurricane as he made his way east and back down onto the beach. Our herd manager was on the phone with our vet, and they had just decided that based on his soundness, the amount of ground he had already covered, and the fact that the wound did not appear to have damaged anything structural in his leg, it would be best not to intervene any further and just keep a close eye on Hurricane to watch for any signs of infection. However, while they were still on the phone together, Hurricane went down right on the foreshore. He was clearly in distress and would not get back up.

The decision was made to get Hurricane into the trailer and to our rescue farm to be seen by the vet. He was displaying neurological symptoms and could not stand, or even lay with his head upright. Our vet met us at the farm, and we spent several hours trying to get Hurricane to stand back up. He was administered IV fluids, steroids, and an anti-inflammatory, but despite our best efforts we couldn’t get him to respond to any of this, or any other stimuli or efforts to get him to stand.

Around 6 p.m., Hurricane went into organ failure, and we made the call to humanely euthanize him and end his suffering. Our vet determined that he had gone into heat stroke from struggling and stressing after being caught in the wire for at least several hours.

Our heartfelt thanks goes out to everyone who helped get Hurricane off the beach yesterday. It was not an easy task, physically or emotionally.

Property owners, please take this preventable death as an opportunity to look around your yard and clean up anything that could be a danger for the horses. Any kind of wire is an extreme danger to the horses, and not suitable fencing material. Pallets, sand fencing that’s falling down, loose ropes, barriers and gates that are in poor repair, rusted and broken car and boat parts, etc., etc. are all hazardous to the horses’ safety. This is not the first time we’ve had a horse tangled in wire or other material, but with your help hopefully it can be the last. We are following up with the appropriate parties to make sure the area where Hurricane was found is cleaned up of any other dangerous wire.

These horses already face so many natural challenges to their survival – a harsh environment, genetic instability, a shrinking habitat – don’t let something simple like yard debris or haphazard fencing be the reason we lose one of them. If we can convince every property owner to go outside, take a look around, and clean up anything that looks like a hazard, then maybe Hurricane’s death won’t be in vain.

To learn more about Corolla Wild Horse Fund or to support them visit www.corollawildhorses.com