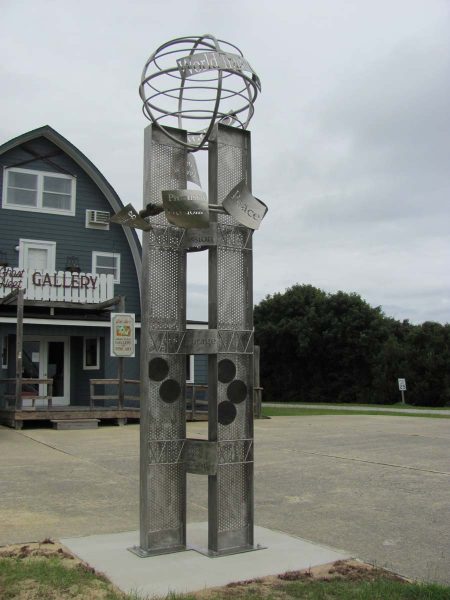 Update: The Glen Eure Ghost Fleet Gallery has announced a time for the 9/11 Remembrance, a ceremony honoring the victims of the 9-11 terror attacks 20 years ago, as well as the responders, families and loved ones.

The sculptor, Hanna Jubran, will lead the outdoor ceremony at the memorial site at the Ghost Fleet Gallery, 210 E. Driftwood Street in Nags Head. Those attending are asked to arrive by 8:30 a.m. for the 9:00 a.m. presentation. Those wanting information can call the Gallery at (252) 441-6584.

It was during a class discussion last semester when international sculptor and East Carolina University Sculpture Professor Hanna Jubran realized that his students knew very little about the Sept. 11, 2001 terror attacks. That’s when he knew it was time to use his talent to create a memorial to remember that tragic day.

“I always wanted to make a memorial for 9-11, a memorial to commemorate that moment in time in history when these innocent people were killed in a vicious way by terrorists,” Jubran told the Voice during an interview. The class discussion ‘really triggered in my mind that I need to commemorate that, I need to bring this out to the public.”

Jubran, who along with his wife Jodi Hollnagel Jubran partnered with Outer Banks artists and longtime friends Glenn and Pat Eure in 2003 to create the “The Monument to a Century of Flight” in Kitty Hawk, knew just the place for such a memorial – outside the Eures’ Ghost Fleet Gallery in Nags Head.

After getting the go-ahead from Pat Eure, Jubran set out to create the stainless steel and bronze sculpture titled, “Always Remember 9/11/2001” at his home studio near Greenville. The memorial was erected outside the gallery on Aug. 18.  Jubran says that a commemorative ceremony will be held at the memorial site on Sept 11.

“One medallion represents a moment of silence, a moment of the first crash into the tower and cries of horror,” Jubran explains. “The bronze cast hands reaching out as the victims are floating in space and trying to unite holding on to each other and atop the towers is the world globe representing the World Trade Center and global unity against terrorism.” 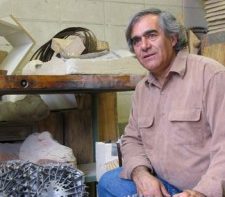 “I will always remember September 11, 2001 as one of the saddest moments and worst terrorist attacks in American history, a moment of anguish and defeat of the human spirit by the terrorist attack using and crashing four airplanes with their passengers and crew members into the World Trade Center, Pentagon and Somerset County, Penn.,” Jubran stated, noting that the victims included 2,977 U.S. citizens and 372 foreign nationals from 61 countries.

Jubran said the memorial is the result of “twenty years of living with this horrific memory of a moment that kept triggering sad moments, of remembering and watching the victims jumping from the twin towers, hearing the voices on the planes and listening to their conversations with their families and phone messages.”

Pat Eure told the Voice that the gallery and Jubran “join so many who want to say to families and loved ones of these heroes, ‘We remember.’ And I am sure those seeing it will be moved, as I was.”

Of her husband, Glenn Eure, who died in 2018, Pat wrote in a Facebook post that he “would have been honored that Hanna Jubran chose the Gallery as site for this extraordinary work that has such meaning. Hanna speaks for so many of us in what he has created and, at the same time, calls us into our own silences.”

“With this memorial, I am honoring the victims and their families. A moment to remember, reflect and promise never to forget this tragic event and try to teach the new generations about liberty, freedom and honoring our democracy,” Jubran said.

By placing the monument memorial at the Ghost Fleet Gallery, he added, “I am hoping to reach out to all the visitors from across the country and foreign nationals to the Outer Banks and reminding them of their freedom, but also to educate all the new generation.”

The memorial was installed with the help of Ben Cahoon & Kasten Architects, Judd Snapp and David and Sharon Whitehurst, who assisted with the installation as well as Jeb Walker Hedgecock, who helped with casting and printing.