‘Those discussions need to happen today’ 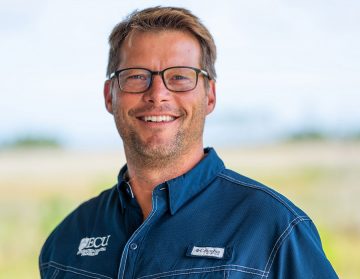 Published by the Intergovernmental Panel on Climate Change, the “Climate Change 2021, Summary for Policy Makers” is the sixth climate change report the group has published and the first since 2013.  The document details key findings in the science of climate change, comparing a number of the findings to the 2013 report and a supplemental 2019 report.

The report is 42 pages long and contains considerable data, graphs and predictions, many of them quite troubling. Here are a few.

To help understand what is in the report, the Outer Banks Voice spoke with Reide Corbett, Executive Director, Coastal Studies Institute and Dean of the ECU Integrated Coastal Programs, ECU.

Corbett’s Ph.D. is in oceanography, and he has done extensive work for the state of North Carolina mapping the estuarine shorelines of the state. He has also published papers on the effect of hurricane on the state’s estuarine systems and worked on assessments of climate change on North Carolina.

Voice: In looking over the Summary for Policymakers, the document is informational, but does not seem to suggest any specific policies. Is that correct?

Corbett: That’s right…and that’s the direction that they’ve always gone. This isn’t about providing the policy. This is providing information about the science, and everything that goes into the science, such that better policy can be developed by those that develop policy. This should be used to inform policy.

Voice: Let’s bring it back locally and regionally. Referencing the NC 12 Taskforce, is it fair to say that some of the things that are happening with NC 12 are attributable to an accelerating sea level rise?

Corbett: Well, yes and no. There are definitely multiple drivers, sea level rise being one. Storms being another and certainly changes in storm dynamics, changes in the strength of storms and the occurrence of storms are a product of climate change. Those are drivers that we have to consider when thinking about NC12 and the vulnerability of NC12 in different locations.

Climate is not the only driver for the vulnerability. It’s an important driver moving forward, particularly sea level rise, which will lead to inundation of the island…An extremely important thing that we need to consider is the recent past and the projected future of sea level, that is something that will impact the Outer Banks, the Albemarle Peninsula significantly in the next several decades.

Voice: Water seeks its own level, so as we talk about sea level rise, don’t we also we also have to simultaneously think about the sounds?

Corbett: When we talk about sea level rise, we aren’t referring to just ocean rise. Any place where the ocean is connected to an estuary, you will see a similar rise. So for the Outer Banks, we’re talking about a four and a half millimeter per year rise (.18”) That translates to both sides of the islands.

Voice: Given all of this, what can we expect over an extended period of time? What does the future hold for the Outer Banks?

Corbett: There are areas along the Outer Banks that are certainly more vulnerable to sea level rise, to flooding, whether it’s sunny day flooding or increased inundation due to storm surge.  The Outer Banks and the communities should be thinking about a vulnerability assessment so we can really start addressing this moving forward. We should be having those discussions on how we think about resilience for 20, 30, 40 years in the future.

Those discussions need to happen today. Let’s deal with our vulnerability and we have to start the discussions for how to deal with the long-term trends that are expected and that will certainly happen in our future.

Voice: How reliable are the predictions that we’re seeing? How do current observations match with the predictions made in the 2013 Summary for Policy Makers and subsequent special reports?

Corbett: We’re doing a pretty bang-up job. We, the scientific community, are developing these models that are very good predictors of what it’s going to look like multiple years into the future.

Voice: But aren’t some of the effects of climate change accelerating more quickly than predicted?

Corbett: Some are sort of on track, and so it sort of depends on what you’re looking at. I certainly don’t think you could make a blanket statement that everything is accelerating faster. Some of the parameters are…within the range of expectation from the last report, but it’s at the earliest level of that expectation.

Voice: The report cites “…Observed increases in well-mixed greenhouse gas (GHG) concentrations since around 1750 are unequivocally caused by human activities.” How do we know the measurements from that time?

Corbett: We can take it back much further than that. We can take it back thousands of years. The way they do that is through ice cores. There are two different locations where they’re primarily collecting these ice cores. East Antarctica, and in Greenland. When the ice freezes at these locations, it incorporates small bubbles of gas so that atmospheric gas is trapped in the water that is ultimately frozen on these continents and it creates layers. And these layers can be counted, and you can analyze this. This 1750 number that is used is a couple of ice cores that have been collected from East Antarctica.

Voice: One of the things that stands out in the report is that in the short term, we can do very little to change the trajectory of climate change until 2050. In other words, the choices we make now will have little effect over the next 30 years, but they could have a dramatic effect beyond that.

Corbett: I don’t remember what the exact year was, but generally it’s a complex blue ball that we live on, and we have set this in motion. It’s kind of like a Mack truck rolling down a hill. It’s not something that you can easily stop. We can change the trajectory, but it’s going to take time to make that turn. Because we have already set it in motion … it’s hard to change the trajectory of that truck.

The fact is we’ve changed the direction of sea level rise, likely for, 500, 1000 plus years. There’s not much we can do today that won’t lead to a significant rise in sea level. It’s not that we shouldn’t be making changes, it’s just that, we need to think about this isn’t for our generation, and maybe not for the next generation, but it’s for generations down the road.”