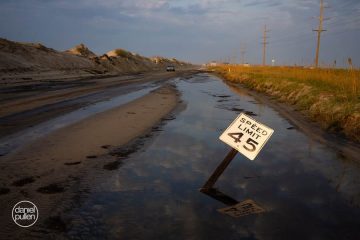 As the NC 12 Task Force continues to consider possible scenarios for maintaining the transportation network with Hatteras and Ocracoke Islands, the complexity of the project becomes more apparent.

The new Task Force, which first met in May, was formed to develop a long-range plan to address concerns about the often-perilous state of NC12 south of Oregon Inlet, most notably to make recommendations about seven areas identified as “hotspots.”

At the Sept. 8 meeting, the Task Force’s stakeholders’ subcommittee planned to look at the hotspot from the south end of Avon to the north end Buxton. But a question soon emerged about whether the north end of Avon — an area subject to flooding — should also be categorized as a hotspot.

“I don’t know if this makes any sense, to define a separate a new hotspot, which is the area just north of the pier, all the way to Avon village,” said Dave Hallac, Superintendent of the National Park Service Outer Banks Group.

Flooding does not necessarily mean an area is a potential hotspot. What is more significant is whether or not the flooding damages the road, said NCDOT Deputy Engineer Win Bridgers. “Flooding on NC 12, overwash and standing water in traffic, it does hinder mobility, but doesn’t destroy the road structure.”

He added that NCDOT was aware of the problem on the north end of Avon, but noted that at least some of the flooding had little to do with road design.

Looking at the erosion rates and sea level rise, Reide Corbett, Director of the Coastal Studies Institute, pointed out that if one of the goals of the Task Force was to think about how to plan for the future, then expanding the Avon-Buxton hotspot might be necessary.

“Avon has the fastest erosion rate of any of the hotspots,” he said. “Combined with sea level rise…there is a possibility…that the high tide line could be between Highway 12 and Ocean View Drive in nineteen years. Which means that high tide line is potentially a major threat to the integrity…of the highway itself.”

Dare County Manager Bobby Outten explained that the county is moving forward with beach nourishment in that area, and that beach nourishment had proven to be an expensive but effective mitigation tool in protecting infrastructure and property in other parts of the county.

Outten did acknowledge, though, that nourishment was not a long-term solution.

“Short term, we can do beach nourishment,” he said. “That could be ten years. That could be fifteen years. I don’t know how long that’s going to last.”

The Task Force also did focus on the Avon to Buxton hotspot at the meeting, basing the discussion on NCDOT’s 2015 Feasibility study.

The subcommittee quickly rejected short-term solutions that called for moving the roadbed west, with unanimous agreement that moving the road would not address the issue of ensuring access to the communities in the area.

Another solution that would have built a bridge in the existing right-of-way for the entire length of road between Avon and Buxton was also rejected, with consensus that in a short amount of time, the bridge would be either on the beach or in the surf zone.

The alternative that was chosen was a combination of two long-term solutions from the study. Although the idea of a bridge extending the entire length of the hotspot was seen as impractical, committee members felt that short bridges at either end of the existing right of way and a longer bridge in Pamlico Sound that would bypass much of the project area was the best option.