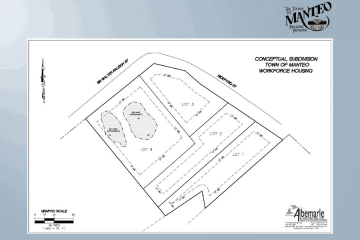 Rendering of the site of the proposed pilot project

As Dare County continues to grapple with how to address the affordable housing crisis, the Town of Manteo is moving forward with a pilot project on a .9-acre town-owned parcel at the corner of Sir Walter Raleigh and Bideford streets.

During its September 1 meeting, the Manteo Board of Commissioners authorized Town Manager James Ayers to put out Requests for Proposals (RFPs) for a project that will either include four single-family units or seven multi-family units on the property in hopes of entering into a public-private partnership with a developer.

In throwing her support behind the project, Mayor Pro Tem Betty Selby asserted during the meeting that, “We’ve been waiting long enough, and we’ve been talking about affordable housing for seventeen years.”

Ayers told the board the town could get the RFPs out in the next 30 to 60 days. In early July, the town signed a contract with an engineer to help with conceptual phase of the project and Ayers indicated that the bulk of the preliminary work has been done. He also noted that the small pilot could potentially be the first of more similar projects in Manteo.

“Reports from Dare County and their consultants in the past show a massive need for affordable housing on the Outer Banks,” Ayres told the board during its Sept. 1 meeting. “I don’t think that the second smallest municipality, however, can solve the entire region’s problem. But we certainly need to take care of the folks right here in this jurisdiction.”

Of the pilot project, Ayers noted, “It’s feasible, there’s no variance required, there’s no filling of wetlands…so four single-family or seven multi-family units are achievable and available for us to do.”

If the town opts for the latter configuration, Ayers said it would consist of two-bedroom units with two parking spaces each. “There’s even room for a little park area there and it projects a lot of the big trees” along Bideford Street and allows for open space, he added.

While Ayers noted that the board has indicated that the town ideally would like to embark on a public-private partnership, he said it was prepared to move forward with the project on its own if the board chose to do so.

During his presentation, the Town Manager noted that there are adjacent areas to the town where there can be some cooperation between the Manteo and the county – such as the Bowsertown tract the county is exploring as a site for between 70 and 75 affordable housing units. He also cited the Elizabethan Inn property, which the county is investigating as a potential site for additional housing.

The town’s role in those projects, Ayers said, would primarily be to provide utility access. But he stressed to commissioners, there are actions the municipality can take now to address the issue of affordable housing.

Of the urgency to move forward, Ayers declared: “The need is now, of course. There are folks right now who need housing, there are folks who are turning away from Dare County and even the town of Manteo because of lack of housing…And that creates a brain drain. We are losing the talents of young people here. We cannot lose that talent and I’ve heard anecdotal evidence of that.