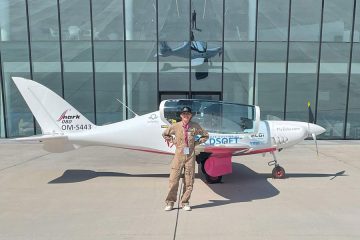 If it’s Sept.12, this must be Phoenix — or maybe Los Angeles.

Two weeks after she touched down at the birthplace of flight to a welcoming crowd in Kill Devil Hills, 19-year-old Zara Rutherford is on her way to the West Coast as she attempts to become the youngest woman to fly solo around the world.

As posted on her FlyZolo Facebook page on Sept. 11, Zara had something of adventure yesterday that brought her to Spaceport America, an FAA-licensed spaceport located on 18,000 acres in Southern New Mexico. Here are the details in that post:

“Had the most amazing day in Spaceport America with @virgingalactic yesterday, so thank you!

On the flight out I noticed my airspeed indication wasn’t working (after I took off). Did a quick circuit to land to check what was wrong with the pitot tube (measures the speed of the plane in the air) and hope I hadn’t stupidly left the pitot cover on…Turns out it was just blocked. I decided to fly to Las Cruces where they could help me out. However, the pitot tube being blocked caused a couple other issues and I returned to Spaceport soon after takeoff. So if you’ve been tracking me on www.FlyZolo.com and saw all those loops, now you know why! I was able to leave this morning whilst the air was still cool and not too bumpy.

From there, the Belgium-native heads north and is currently slated to land in Juneau, Alaska on Sept. 17. Twelve days after that, she is scheduled to touch down in Beijing.