End of an era – Mako’s closes in a month 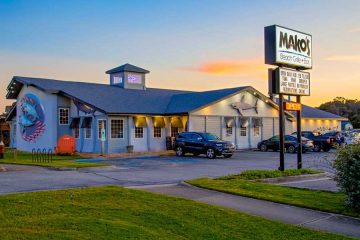 October 27 will mark the end of an era — or maybe two — in the history of Outer Banks restaurants. That will be the last day of operation for Mako’s Beach Grille + Bar in Kill Devil Hills, the last Mike Kelly-owned restaurant to close its doors.

The first one was Kelly’s signature Outer Banks Restaurant and Tavern in Nags Head that was bought by German-based grocer Lidl in 2017. In 2019, the Dare County Tourism Board approved the purchase of Kelly’s other Nags Head restaurant, Pamlico Jack’s. Earlier this year, Dare County announced it was buying Mako Mike’s from Kelly as part of a project involving a new county Emergency Medical Services (EMS) facility as well Kill Devil Hills public safety facilities. According to reports, the three properties sold for a combined total of almost $9 million.

Kelly, who bought Mako’s back in 1994 with the late Frank Gajar when it was operating as a steakhouse, still retains his catering business. And when asked what’s next for him with the restaurants closed, he responded that, “If I had one person a day ask my what I’m planning on doing, I’ve had twenty.”

Kelly, 71, made it clear he’s hasn’t plotted out his coming activities in detail, but he did say that “I’d like to do a bit of traveling across the U.S.”

Kelly also acknowledged that operating in a pandemic has proven challenging to restaurateurs forced to cope with uncertainties ranging from the size of the visitor contingent to the availability of restaurant staffers. He noted that the 2021 tourist season was an extremely busy for Mako’s and the Outer Banks in general, and one that started early.

It was Memorial Day, and then “all of a sudden people were coming down here,” Kelly observed.

Mako’s is currently having a liquidation sale, with anyone interested asked to come by and take a look.