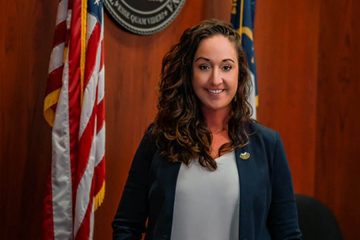 Not many of us decide our future career and the age of eight and go on to fulfill that dream. But our newest District 1 Judge, Jennifer Bland, did just that.

On September 2, Bland was sworn in as a District Court judge after her appointment to that position by Governor Roy Cooper. Bland, who had been working for District 1 DA Andrew Womble, was tapped for the post to fill a vacancy created when Cooper promoted Judge Eula Reid to fill a Superior Court vacancy.

Bland is only the fourth woman to be appointed to the bench in District 1 and one of only two serving at the District Court level, the other being Judge Amber Davis.
When asked how she came by her lifelong notion of being a prosecutor at such a young age, Bland credits watching the TV show ‘Murder She Wrote’ with her father.

“It was kind of our thing” she said, and it helped fuel her desire to put the bad guys away.

That desire never waned throughout her years in school. Bland graduated from Manteo High School in 1998. She moved on to UNC-Chapel Hill, where she majored in Interpersonal and Organizational Communications in 2002 and took three years off from her studies.

Her next stop was UNC’s School of Law, graduating in 2008. By September of that year, she was sworn in as an Assistant District Attorney (ADA), skipping private practice entirely, in NC Judicial District 1, which encompasses Camden, Chowan, Currituck, Dare, Gates, Pasquotank, and Perquimans counties. Thirteen years later, she was sworn in as a judge.

When asked what, besides a popular television ‘whodunit,’ inspired her to become a prosecutor, she recalls, “I’ve always been very conservative and tough on crime. I’ve always had this belief that people should be held accountable for their actions. If you do something wrong, you should own up to it and be held accountable.”

Bland laughs as she recalls her work in the Orange County Public Defender’s office, where she worked the last year of her hiatus from college. “It became a joke around the office. They kept saying, ‘You’re such a prosecutor because my response when reviewing cases was ‘That one is guilty, that one is guilty, and so is that one!’”

In both of summer internships during law school, she worked in the District 1 District Attorney’s office.

As a new ADA, she began by trying only misdemeanor cases. But as she progressed and gained experience, she handled cases that revealed the worst side of human behavior.

“One of my earlier cases,” Bland recalls, “was a Perquimans case where the victim had been raped for over a decade by her six brothers. I prosecuted all six of the brothers and the parents and put them all in prison.” Her job has taken her to five of the state’s seven judicial districts, where she has tried numerous sexual assault and rape cases.

During her time as an ADA, Bland refined her focus on what it means to be a prosecutor. It wasn’t just about putting away the ‘bad guys.’ Instead, Bland said, she found her real passion was advocating for victims, seeking justice for them, their families, and loved ones.

“In the First District, I’ve handled a lot of victim-oriented crimes — murder, assaults. Especially in a jury trial, where you work closely with the victim—a child, a sexual assault victim, you go through a very emotional process. There is nothing better than knowing these victims have gone through the toughest part of their lives and creating at least one positive outcome when justice is served, and the perpetrators held accountable,” Bland said.

In recent years, she has also taken up another interest in her off-duty hours — drugs and the opioid crisis.

“This has become a hot topic in this area,” she relates. ‘Two young people just died in Manteo from a drug overdose, and it’s so sad. I’ve worked on the local Recovery Court Board with elected officials such as Dare County Commissioner Ervin Bateman, trying to seek rehabilitation options for addicts while working to put dealers behind bars.”

Under our adversarial system of justice, the role of a judge is to be a neutral presence to ensure the rights of the defense, plaintiffs, and accused are upheld, and all sides treated fairly. Judges also try civil cases, which lack the emotional triggers that come with criminal proceedings. We asked how Bland would view the transition from prosecutor.

Citing her five-year-old daughter, Bland said, “There’s a significant crossover between family law courts, the DA’s office, and the Department of Social Services. I saw a need in that area and a role I could play on the bench as an advocate for family law cases.”

She added that, “I can see both sides, as I’ve had experience in the public defender’s office, and I also understand the state’s position in criminal trials from my service as an Assistant District Attorney. I’ve also evolved. As a young prosecutor, one tends to be super passionate, even overly passionate. But, with time and experience, you have a broader picture of what really matters, so on the bench, I believe I will also understand what really matters—which people need to be put away, and which ones don’t.”

One new aspect of Bland’s job is that she is now part of the political process. Judges are elected in North Carolina, and recent changes in the law have made these partisan elections. As a result, Bland will have to stand for election in 2022.

Bland admits, “I’m nervous; it is a little overwhelming. But I am excited to have the chance to prove to the people in this district that I will be a fair and impartial judge that I will possess the right temperament for the bench, fight hard for this community and represent the community on the bench. As one of the few women serving as a judge in District 1, I want to be a role model and bring diversity to the position, especially in cases where the victim is a woman.”