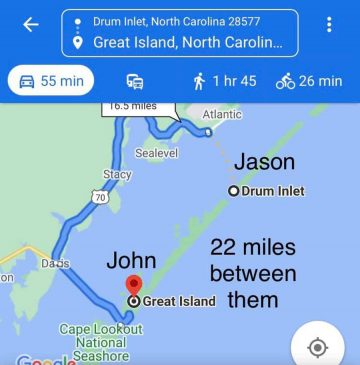 Update: In the past few days, more details about the incident have been provided through Facebook posts from Ronda Quickle, who identifies the missing woman as Savannah Jane Grant, the girlfriend of her son Jason. Jason Quickle, along with a friend, John Pearson, were the men found alive.

Those three, along with Jason Quickle’s dog, capsized as a storm approached, according to Ronda’s Oct. 11 Facebook post. She also noted that Jason was recovering in the hospital.

Today, on Oct. 13, Ronda posted this message as she keeps hope alive for Savannah.

“I just want everyone to know the area that needs to be searched. This is the distance between the two that were rescued. It’s a very vast area needed searched. Savannah could literally be anywhere in between or even further down. If anyone is looking around there locally, please know that there is a possibility of any and all of this area. Please see the video of the distance John drifted down to 22 miles away. Thank you.”

The U.S. Coast Guard released a statement on the night of Oct. 11 announcing that the search has been suspended for a 27-year-old woman missing in the water in the vicinity of Portsmouth Island in Ocracoke Inlet. The Coast Guard searched approximately 1,635 square nautical miles for 73 search hours.  “The decision to suspend a search is the toughest part of my responsibilities,” said Capt. Matt Baer, commander, Sector North Carolina. “Our hearts are with the family who lost a loved one during this incident.”

Watchstanders at Coast Guard Sector North Carolina command center received a report via 911 at approximately 4:15 p.m. on Saturday, Oct. 9 of a capsized canoe with two people aboard.

An MH-60 Jayhawk helicopter aircrew located a conscious male survivor alongside a green canoe approximately 2.8 miles offshore of Drum Inlet at approximately 9:54 a.m. on Oct 10. The survivor was hoisted into the aircraft and transported to Carteret Hospital in Morehead City.

A second survivor, the original reporting source, was found ashore on Great Island by a good Samaritan, at which point he reported swimming to shore and had last seen the missing person in the early morning hours of Oct. 10.