WHAT TO WATCH ON TV
Stream On: Culinary pioneers and adventurers Julia Child and the Two Fat Ladies 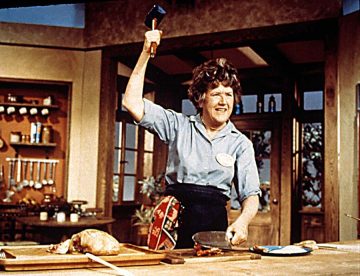 From 1963 to 2000, Julia Child was the flamboyant grande dame of American cooking shows. WGBH)

In 1940, one of the few extant TV shows was Sunday Evening Supper on the NBC station W2XBS. James Beard threw his toque blanche in the ring with I Love to Eat in 1946. But in 1963 former WWII OSS intelligence officer and Cordon Bleu graduate Julia Child produced The French Chef for people who loved to eat—and watch.

In 1996 Clarissa Dickson Wright and Jennifer Paterson created Two Fat Ladies for the BBC, in which they would travel the United Kingdom and Ireland on a Triumph motorcycle with sidecar and create from scratch traditional dishes for army garrisons, girls’ schools and more.

By the time Julia Child’s first TV series ended in 1973, the idea of cooking shows on TV had taken root. In 1973, the cooking show Frugal Gourmet was launched on KTPS-TV, hosted by Jeff Smith, a chef from Seattle. In 1993, the Food Network launched as a cable channel devoted primarily to cooking shows and other programming relating to food.

It was Julia Child who made cooking demonstrations entertaining to even those who lived in hotels and never cooked. In 1961, when middle America’s idea of ethnic food was spaghetti and meatballs, she and Simone Beck and Louisette Bertholle had authored Mastering the Art of French Cooking, and in 1963 Julia developed The French Chef for WNET-TV.

Julia, who had worked as a top-secret researcher with the American Office of Strategic Services in occupied France during WWII (she began cooking when she concocted a shark repellent designed to keep sharks from prematurely detonating underwater explosives.[^}), had many anecdotes to fill the time during pauses in her unscripted and unedited sessions, as she staggered around her onstage kitchen sipping wine and flinging bones over her shoulder to the stifled but still audible laughter of stagehands.

In the 1970s and 1980s, Julia was the star of numerous television programs, including Julia Child & Company, Julia Child & More Company and Dinner at Julia’s, many of which are available to stream.

From 1996-1999, Jennifer Paterson and Clarissa Dickson Wright traveled the UK creating elaborate ad hoc meals for groups including the army, a cricket match and a motorcycle rally. (BBC)

Grab that crab, Clarissa! Eat that meat, Jennifer! A heavenly pheasant: snatch it! Fasten your tastebuds for a gastronomic ride, because Two Fat Ladies are itchin’ to get into your kitchen!

From the moment the cartoon cutouts of Jennifer Paterson and Clarissa Dickson Wright roar through the kitchen counter on Jennifer’s Triumph Thunderbird as the ladies lustily sing their theme song, the viewer should realize s/he’s in for a good time.

Paterson, a celebrity cook, author, actress and television personality, wrote that “My father, having gone through two World Wars, was far too frightened to put on a kettle and my brothers, who married young to very good wives… never showed any signs of wanting to whip up something delicious for a treat.”

Dickson Wright, a celebrity cook, television personality, writer, businesswoman, and former lawyer, was an accredited cricket umpire and one of only two women to become a Guild Butcher (The Worshipful Company of Butchers is one of the Livery Companies of the City of London, since 975—that’s the year 975, not a typo).

And both were old-school bohemians, as liable to suddenly burst into Gilbert and Sullivan as they were to quote Chaucer. Moreover, they loved red meat, butter, cheese and cream, and reserved their contempt for “manky little vegetarians.”[^]

Next time, the best on-screen Superman and Batman representations. (Change my mind!)